Bold, brilliant, and bonkers - this is joyously subversive circus and not one to miss 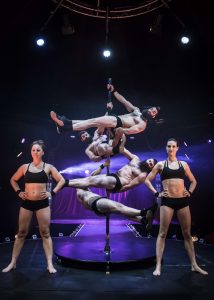 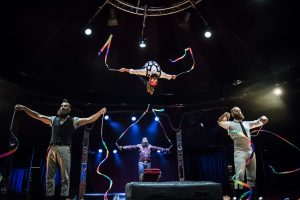 Before entering London Wonderground’s Spiegeltent (between the Southbank Centre and the London Eye) for a performance from this Quebecois ‘nouveau cirque’ group, it is best to throw out all conceptions about what circus should be. A treat such as Cirque Alfonse’s current show should not be spoiled by any previous impressions. Billed as ‘Electro Trad Cabaret’, Barbu is not only tremendous acrobatic display but an irreverent playground where good-natured practical jokes and tongue-in-cheek sexuality are celebrated.

On the outside, the show is an extravaganza of human skill and circus tricks, performed by a charmingly unorthodox cast. The male cast looks like a cross between Weimar showgirl and Canadian lumberjacks, and they look like they would be equally comfortable in either role. While the ladies are often lifted, tossed, and spun as in traditional circuses, they get ample opportunity to demonstrate their own strength as well. All get ample stage time to demonstrate their skills, and even the troupe hamster gets a cast credit on their website! The daring tricks range from roller skate twirls to a see-saw human trampoline, from pies in the face to balancing golf clubs to an all-out pole dancing extravaganza. Each, however impressive or physically taxing, comes with a healthy dose of cheeky innuendo high-spirited fun, making it engaging as a spectacle and a farce.

Although there are more ‘traditional’ circus bits – human towers four people tall, an impressive performance on the aerial hoop, a ‘mentalist’ section, and a classic locked box trick – this is far from a ‘traditional’ circus performance. Even these did not conform to expectation; the ‘mentalist’ projected a ridiculously camp vision into his subject’s head, and the lady emerging from the locked box came out not in costume but in beard and nipple pasties. Gender is clearly a fluid concept here, and it’s the source of all hilarity.

Cirque Alfonse’s most joyous, singular trait seems to be their thoughtful yet daring subversiveness. Boundaries are not pushed merely for the sake of it but instead to elicit a hearty laugh, such as in a staring contest interrupted by an interloper with hilarious, half-naked results. Every bold choice feels playful instead of political, bringing a light-hearted spirit instead of a moralising hand to this modern circus.

Like an old-fashioned show ring, the Spiegeltent has seats on all sides of the stage save for the walkway between the orchestra side and the centre platform. This was no major detriment; while it is clear that the audience directly in the front (across from the walkway and orchestra) got the best stage pictures, the performers played out to all sides. The venue is small enough to see every facial expression and acrobatic detail; this intimacy highlights the spectacle’s outlandishness and makes the audience co-conspirators in the antics.

For something bold, brilliant, and utterly bonkers, Barbu is the hottest ticket on the Southbank. Cirque Alfonse has created a riotous, ridiculous, and incredibly special piece showcasing the heights of human physicality while inserting a delightfully subversive undercurrent. This unique show is not to be missed.

Barbu is presented by Cirque Alfonse and Underbelly Productions and is running at the London Wonderground (outside the Southbank Centre) until 25th August. Shows are Tuesday-Friday and Sunday at 7.45pm; Saturday’s two shows are at 6.30pm and 9.30pm or at 6.00pm and 8.30pm, depending on the week. Information and tickets (from £36-£46 per individual seat, or £236 for a private booth seating up to nine) can be found at http://www.londonwonderground.co.uk/whats-on/2016-season-barbu