Review of: Aladdin at the Prince Edward Theatre

Aladdin will not be a show to break the mould, but it serves as wonderful West End theatre. As a family show it excels beyond most.

Cameron Mackintosh has unleashed yet another immense spectacle on West End audiences in the form of Disney’s classic Aladdin (now perhaps, a prologue before he coaxes Hamilton over from across the pond), a well-known classic reinvigorated here with vibrant colours, some new musical numbers and an equally anachronistic series of cultural references from everyone’s favourite lamp-dweller. In a nation that sees a dozen Aladdins performed on a panto-seasonly basis, to see a new, ‘faithful’ version was perhaps a strange occurrence, but one that was nevertheless executed with technical and visual wizardry.

Aladdin’s story is a tale as old as time – boy falls in love with princess above his station, he finds magic lamp in cave, genie helps him try and woo girl back, in the process instigating a form of self discovery and the boy comes around to the fact that, fundamentally, love transcends. It’s a straightforward, glib piece, here onstage embellished with some references to deceased parents and the introduction of Aladdin’s merry bunch of street rat brothers (who, admittedly, end up stealing a fair few of the play’s scenes). This new version has certainly been spruced, with new dance sections and added musical numbers bulking up the runtime whilst preserving the heart of the original piece. Howard Ashman, who passed away in 1991 and is oft remembered as the wonderful lyricist behind the likes of The Little Mermaid, has had a number of his songs reinstated, pumping the play full of fun show tunes that let the cast shine. 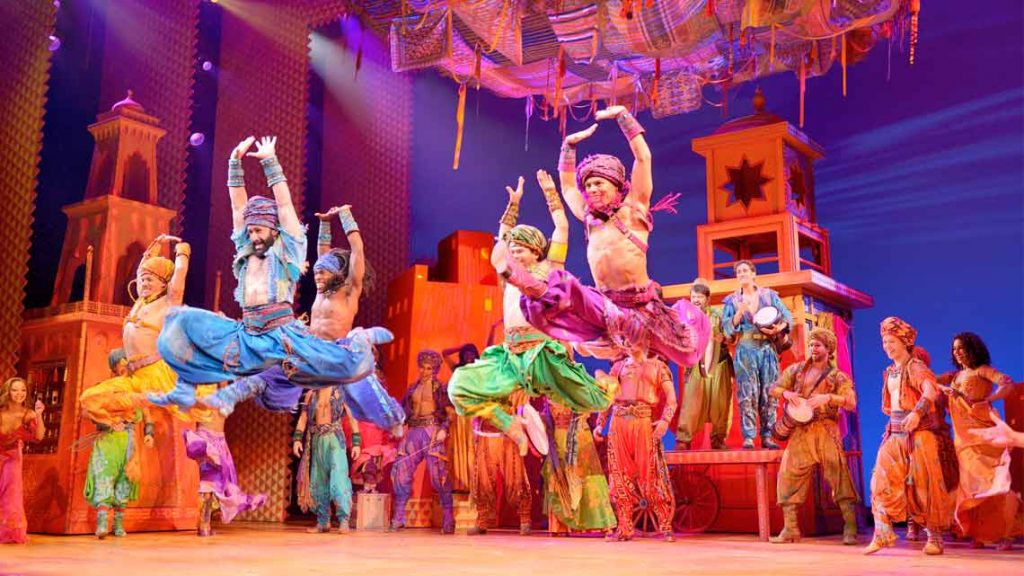 The show is, perhaps, always going to be overshadowed by its elder cousin over at the Lyceum Theatre, but it’s worth admitting at this juncture that Aladdin makes little attempt to match the theatrical innovation and unique splendour of The Lion King – it wears its qualities on its sleeve, delivering fantastic number after hilarious interlude whilst never demanding too much from its audiences. This is undistilled West End simplicity – technical feats and beautifully ornate sets providing a spectacle worthy of the Prince Edward. The show is cheeky – not having the same nostalgic ring or earnestness of other modern musicals, like  Matilda, yet never resorting to Pantomime tropes (in spite of the deconstruction of the fourth wall at a number of points).

It is telling that director Casey Nicholaw also shares a choreography credit – this is an all-moving, all-dancing Aladdin, almost a Disney-On-Ice minus the ice rink. Fun, easygoing, crowd pleasing, Nicholaw has left the story to take care of itself while dealing with fabricating a spectacular three hours of theatre and song. This has some downfalls – the plot on the whole did feel incredibly pedestrian – particularly the almost farcical ineffectiveness of Jafar who, in spite of a credible turn from Don Gallagher, remains little more than a cardboard villain, ultimately defeated by his own inefficiencies – the climax of the show as a result having little of the visual splendour and tension that the film is renown for.

The biggest asset for the show is therefore the incredible Trevor Dion Nicholas, shipped over from Broadway to return to the role as genie. Robin Williams may have made the part his own, but Dion Nicholas has a sassily contemporary shine that leaves audiences spellbound. Friend Like Me, set inside the beautiful, golden cave designed by veteran Bob Crowley, is a standout moment, some audience members even giving the show a standing ovation a third of the way through its running time.

Aladdin will not be a show to break the mould, but it serves as wonderful West End theatre. As a family show it excels beyond most and, whilst the pantomime comparisons may be more readily available than Disney Theatrical Productions may want it to, this is sure to live on as a West End staple for the coming years.