Review of: A Midsummer Night's Dream at the Southwark Playhouse

Produced by:
Go People and Glass Half Full

Go People and Glass Half Full have looked at the big budget A Midsummer Night's Dream shows parading around the city and, in response, raised something fun and left-field - for that it’s worth a watch.

Go People, Glass Half Full and Simon Evans’s A Midsummer Night’s Dream, currently running at the Southwark Playhouse, is a show committed to the idea of imagination. In a period where a few productions and vibrant spectacles of Dream are bombarding audiences with visual display, this performance is one entirely committed to creating something more intricately incorporeal, whilst also remaining fresh, bold and consistently hilarious.

7 actors casually assemble on a plain, traverse stage in the ever-metamorphic Playhouse, referring to each other by name whilst clutching smoothie bottles, catching up about old times. From there, they realise their troupe falls a whole half score short numbers-wise for the 17 characters of A Midsummer Night’s Dream, so multi-roling and ‘imagination’ were going to be essential to the show’s success. Of course, multi-role in Shakespeare is by no means a new concept, neither is the pared down, set-less performance concept, and it has to be said that Evans’s ideas risked, at this primary juncture, to be somewhat well-worn. The fourth wall evaporated, the play began with the actors assuming the roles of each parts, breaking from Shakespeare’s lines to dissect their own decisions (removing Aegeus, for example, or leaving Hippolyta off stage). 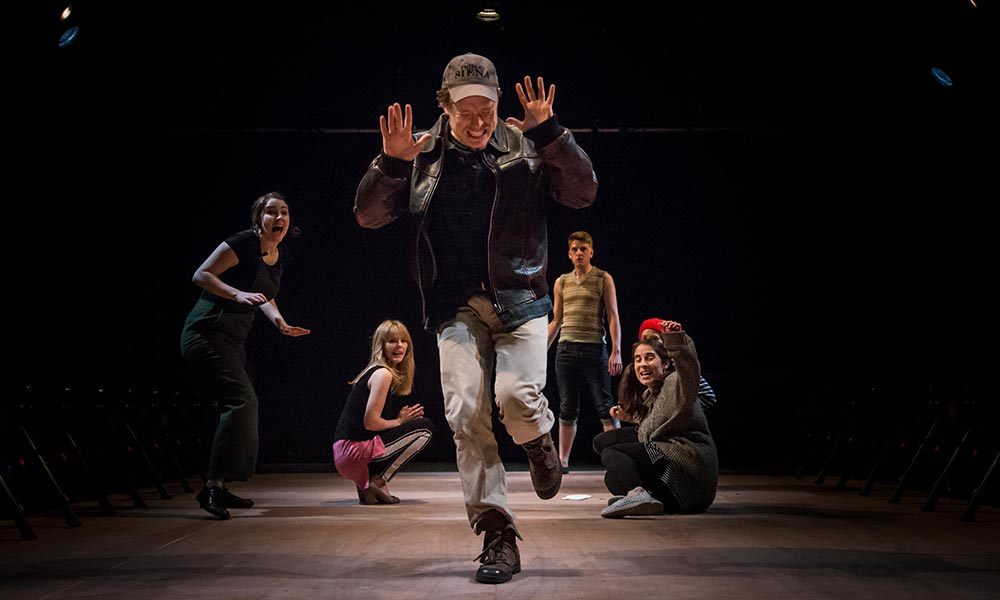 Indeed, as they conversed with us as an audience, asking us to ask them questions and bringing us onstage as inanimate objects (a wall, Puck’s enchanting flower), something rather astounding did occur – Evans’ vision slowly knitted itself into an enjoyable and coherent piece. Our imaginations, long accustomed to technical wizardry and elaborate sets, took a moment to readjust and engage with this minimalistic acting approach, slowly yet surely able to conjure the necessary mental imagery. The show had a very overt resemblance to Tim Crouch’s An Oak Tree, (going so far as to even erect a giant, invisible oak tree in the centre of the stage) – a combination of meta-theatre and intangible artistic invention, encouraging the audience not to remain passive but instead to actually commit to a shared experience.

Evans’ conceptual intricacy could not have been possible without the fantastic cohort of assembled actors, each passing through the various levels of character with ease (at any one time either being ‘themselves’, or one of their two roles in A Midsummer Night’s Dream, or then acting in the play-within-a-play that occurs during Act V). To do so whilst also making this Dream a heartfelt, interesting performance was a fabulous feat – Oberon and Titania’s relationship for example feeling intensely real and powerfully destructive. Special mentions must go first to Lucy Eaton as a complex yet hilarious Helena – a woman recognising yet attempting to overcome the fact she is infatuated with a rude disaster of a man who also happens to be in love with her best friend. Maddy Hill provided a superb Quince (often overshadowed by her more flamboyant company members), a perfect contrast to the more muted vulnerability in her further role as Titania.

Though his Demetrius felt irredeemably unlikeable (as Demetrius often does), Freddie Fox’s Bottom provided a highlight to proceedings – his transformation into an ass being an exercise in physicality tinged with elements of clowning right out of Trygve Wakenshaw’s guidebook – lewd humour mixed with metatheatrical commentary. Given Fox’s current trend of playing haughty film characters, letting him unleash this crownlike sequence made for a wonderful experience.

Given the metatheatrical nature of the production, it was the performance of Pyramus and Thisbe that provided an apotheosis for Evan’s adaptation, endearing the audience with line after line of comedy drenched in self-knowing. As the show closed after a slightly protracted 110 minutes (without an interval), there was a warm glow in the audience – we were involved in a collaboration, an exercise in imagination. Go People and Glass Half Full have looked at the big budget Midsummers parading around the city and, in response, raised something fun and left-field – for that it’s worth a watch.

Find out more information about A Midsummer Night’s Dream here.