Review of: 1984 at the London Playhouse

Produced by:
Headlong in association with the London Playhouse

1984 is a captivating performance, just go and see it.

Headlong will always deliver sterling theatrical work – embodying a form of revisionism so often absent in new shows, as producers and venues have to think about catering to audiences before experimenting with bold reinventions. This new run at the Playhouse Theatre is perhaps little more than a victory lap for the company, but it is nonetheless a fantastically powerful and imaginative piece – cementing Orwell as a visionary not only on the page, but equally when placed in a performative context.

1984 is a text that must, now that it has lived for almost 70 years, be constantly interrogated and reinterpreted. This is, therefore, the cornerstone of Duncan MacMillan and Robert Icke’s concept for the show – temporally distorting the story of Winston Smith, treating him as the subject matter of a reading group retrospectively analysing the memory of the party. With this new idea comes a sense of exhilarating abandon – MacMillan and Icke have given themselves room to breathe, away from Orwell’s didacticism, and in the process placed the book in a wider context. 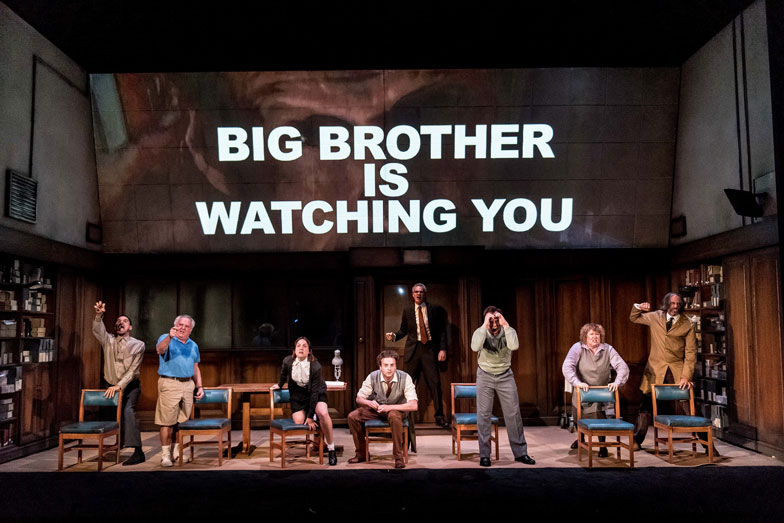 The staging, including design from Chloe Lamford, is innovative as a result. When the stage deteriorates and Winston realises he is caught, we realise just as he does that the cosiness and quaint serenity of his life with Julia is entirely illusionary. The use of projection and camera to depict the closed room is a double edged procedure – at once breaking from the traditional norm to reflect how much of a taboo their liaison is, while also leaving the unshakeable feeling that, if we as an audience are capable of watching the pair, then so too might the Thought Police. It would be interesting to see how the performance may come across to Orwell-initiates – for those of us already ‘in-the-know’ there is a certain teleology to proceedings, ready for Winston’s betrayal and the death of love (and the triumph of Love). The play makes a few strange changes – removing, for example, any direct reference to the proles (only referenced as a generalisation) in what emerges as a rather ‘high political’ take on the book.

As a new staging, it is left to the cast to keep the show’s vibrancy and energy running. Andrew Gower’s Winston is a muddled, confused man, one that gains physicality and presence only when learning of the Goldstein’s resistance forces. It’s a captivating performance of a deeply flawed individual – if this is the last man on Earth then perhaps there’s a reason the species is so close to extinction.