Based on the smash hit 2003 film of the same title, School of Rock features music from the movie, as well as new music written by Andrew Lloyd Webber and lyricist Glenn Slater and a book by Julian Fellowes. School of Rock – The Musical is directed by Laurence Connor with choreography by JoAnn M. Hunter, set and costume designs by Anna Louizos, lighting design by Natasha Katz, sound design by Mick Potterand music supervision by John Rigby.

The nationwide search is underway to find the three teams of thirteen young performers who will join the cast to rock out live on stage each night.

Down-on-his-luck wannabe rock star Dewey Finn poses as a substitute teacher at a prestigious prep school to make ends meet. When he discovers his students’ musical talents, he enlists his fifth-graders to form a rock group and conquer the Battle of the Bands. 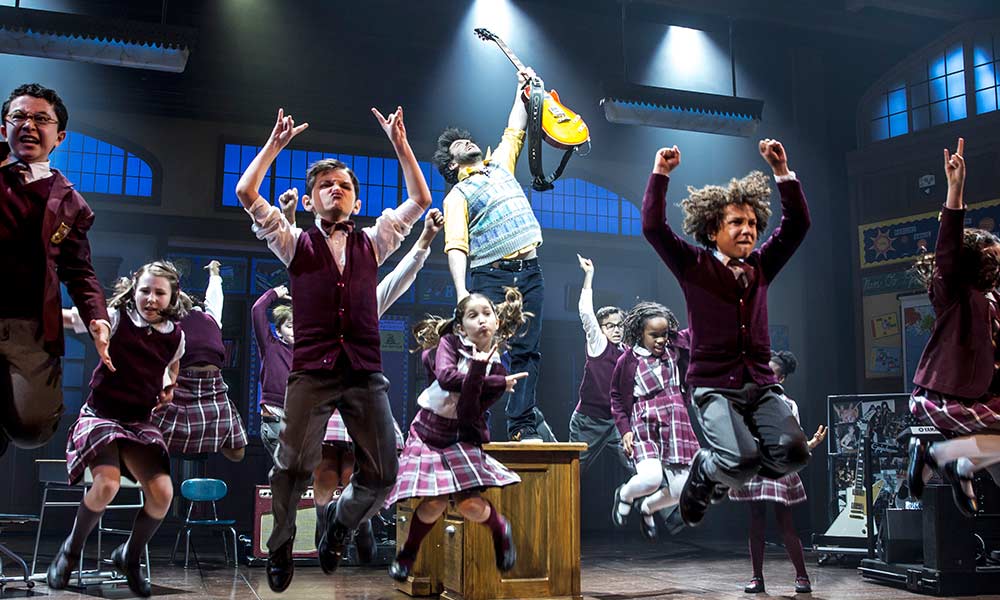 School of Rock –The Musical received its world premiere at the Winter Garden Theatre in November last year and has subsequently garnered 20 Broadway Theatre Awards nominations including four Tony nominations – Best Musical, Best Book of a Musical, Best Original Score and Best Performance by a Leading Actor in a Musical.  At the Broadway opening guests included Mick Fleetwood and Stevie Nicks, Helen Mirren, Sting as well as the complete “kids” cast from the original School of Rock film.  Earlier this monthJack Black who played the role of Dewey in the original film School of Rock, met with the US cast and declared the show “a Broadway masterpiece.”   In October last year School of Rock – The Musical released a 360° music video, shot in a real NYC classroom and featuring the song You’re in the Band, that generated over 1 million views in three days on YouTube and Facebook combined, the fastest Broadway video ever to reach 1 million views.   Over the 2015 holiday period School of Rock – The Musical twice broke the house record at the Winter Garden Theatre, previously home to Cats and Mamma Mia!  In April Grammy Award-winning Fleetwood Mac singer Stevie Nicks made her Broadway debut at School of Rock – The Musicalwhen she surprised the audience by taking to the stage and singing Rhiannon with the musical’s kid band. School of Rock – The Musical was the first original British musical ever to premiere on Broadway.

The Broadway opening was accompanied by another US first, when Andrew Lloyd Webber also launched a nationwide release of the rights for schools and youth groups to create their own productions of School of Rock – The Musical using the exact same score as the Broadway show.  Here in the UK, plans are well advanced to replicate that success ensuring that schools, colleges and youth groups can look forward to being able to license School of Rock – The Musical very soon.

Produced by Paramount Pictures, the 2003 hit film School of Rock was directed by Richard Linklater and starred Jack Black in a career-defining performance.

The Broadway production of School of Rock – The Musical continues at the Winter Garden Theatre, currently booking to 5 February 2017 and a national Company will launch a US Tour in the Autumn of 2017, playing coast-to-coast engagements across America.