Review of: The Suicide

By substituting ridicule and tasteless humour for genuine dark comedy, the Suicide at the National Theatre left a bad taste in the mouth

The National Theatre may be a bastion of the arts in London, but that does not mean that every performance hits the right notes. Upon leaving the Lyttleton Theatre’s auditorium on 11th May, my theatregoing companion summed up his opinion of the piece in one word: ‘dreadful’. Unfortunately, it was not hard to see why about a quarter of the almost-full audience left at the interval: after a promising first half hour of the show, a combination of unnecessary vulgarity, unsympathetic characters, and tactless handling of a sensitive subject – beyond even the conventions of black comedy – made the evening an unpleasant and unmemorable one.

The Suicide is Suhayla El-Bushra’s new versioning of a Stalin-era Russian play by Nikolai Erdman. Here, it is moved from communist Russia to social housing in modern London. The protagonist, Sam, has a small meltdown from the stress of losing his benefits and hunting for a new job.   This outburst on a ledge is filmed by some teenagers and posted on YouTube, and soon Sam’s life and death move into the hands of everyone else but himself. Politicians, mental heath workers, hippie filmmakers, vegan café owners, and former lovers all want to use Sam’s suicide to further their own agendas. Except, well, Sam was not actually planning on killing himself, but now it seems that he has no choice in the matter.

The aforementioned plot had every making of an excellent dark comedy; however, any cleverness and social commentary was killed early on by cheap and distasteful tricks in characterisation and storytelling. It felt like every element which should have contributed to raucous social commentary – namely, the fact that Sam feels forced into suicide by the various agendas – was played without an ounce of humanity. Every action thus became tactlessly exaggerated – bawdiness became grossness and sarcasm became bitterness. This National Theatre production played very much as a tasteless middle class satire of the working class, where the (middle class) audience was prompted to ridicule those on benefits instead of to elicit sympathy. 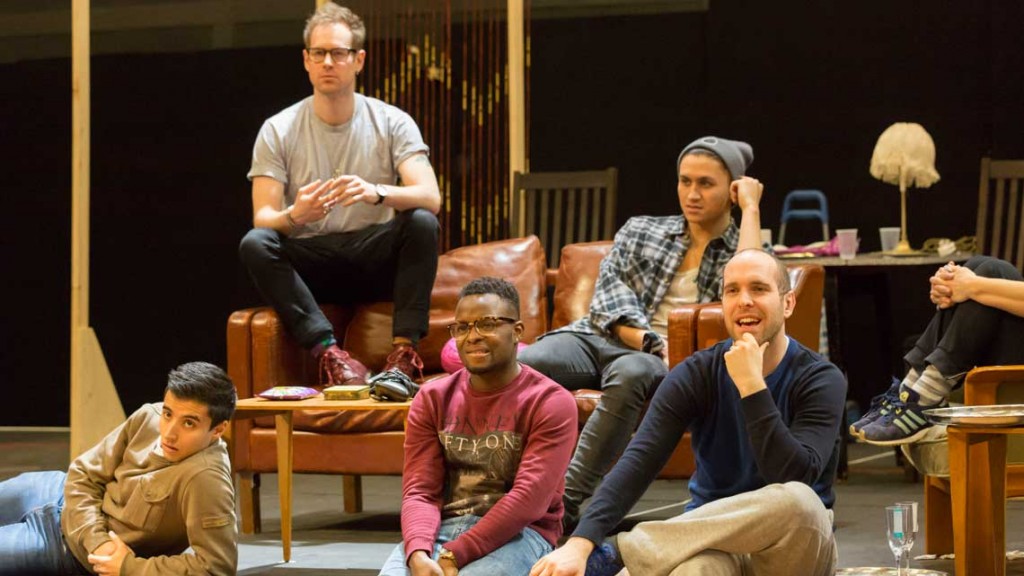 Perhaps most unsettling was the lack of sensitivity in handing the subject matter. I firmly believe that comedies do not always need to be completely politically correct, but the combination of the unsympathetic characters and needless vulgarity in words and actions made some ‘jokes’ about taking one’s life come across as downright offensive. Had the play been updated more cleverly, I believe this delicate humour would have formed excellent dark comedy material.

Not everything was bad, however; the actors poured their hearts into their exaggerated roles, and were their characters not written as so irredeemably unsympathetic they would have elicited pure enjoyment and laughter. Additionally, the show was a technical masterpiece. A two-level stage moved up, down, backwards, and forwards to signify scene changes, and screens dropped in from all angles to form the backdrop for multimedia broadcasts.

While funny in parts and a marvel of stage tech, the lack of thought-provoking humour and plethora of cringe-worthy moments killed any genuine humour and relationships with the audience. It was no wonder I left with a bad taste in my mouth.

The Suicide runs unto 25th June with shows at 2.15pm and 7.30pm on select dates. Tickets are £15-35 (£5 for Entry Pass members) and can be booked from https://www.nationaltheatre.org.uk/shows/the-suicide/whats-on