Review of: The Government Inspector at the Theatre Royal Stratford East

Produced by:
Birmingham Repertory Theatre with Ramps on the Moon

Nikolai Gogol’s classic farce of corrupt provincial officials, mistaken identities, and comically exaggerated characters has found a spectacular production in Birmingham Repertory Theatre’s and Ramps on the Moon’s partnership. While the performance adheres faithfully to the original (yet translated) text and Russian names and keeps all for their plot and comedy purposes, it is far from a ‘traditional’ production for all the best. The show’s main aim is inclusivity of deaf and disabled audience and performers, which it achieves by including three sets of surtitles around and above the stage, BSL interpreter-actors translating every line of dialogue while the action occurs, and disabled actors filling some of the roles. The result should have been sensory overload, but instead the variety of storytelling only contributes to the raucous, ridiculous storyline. The result is a fast-paced, laughter-filled show that embraces its unorthodox storytelling while taking full advantage of Gogol’s darkly comedic flair.

The plot is kicked into action when the Mayor of a small provincial Russian town receives word that he will be receiving a visit from a Government Inspector, and that this Inspector may be in the town already. Thus he and his fellow officials among the courts, hospitals, schools, and gentry begin to scramble to minimise evidence of corruption while identifying the Inspector as fast as possible. But this haste leads to sloppiness, and the town ends up fêting Khlestakov, the rakish son of a country nobleman, instead. Hilarity ensues. While this scenario may ring a bell for fans of Fawlty Towers, it is a classic for a reason. 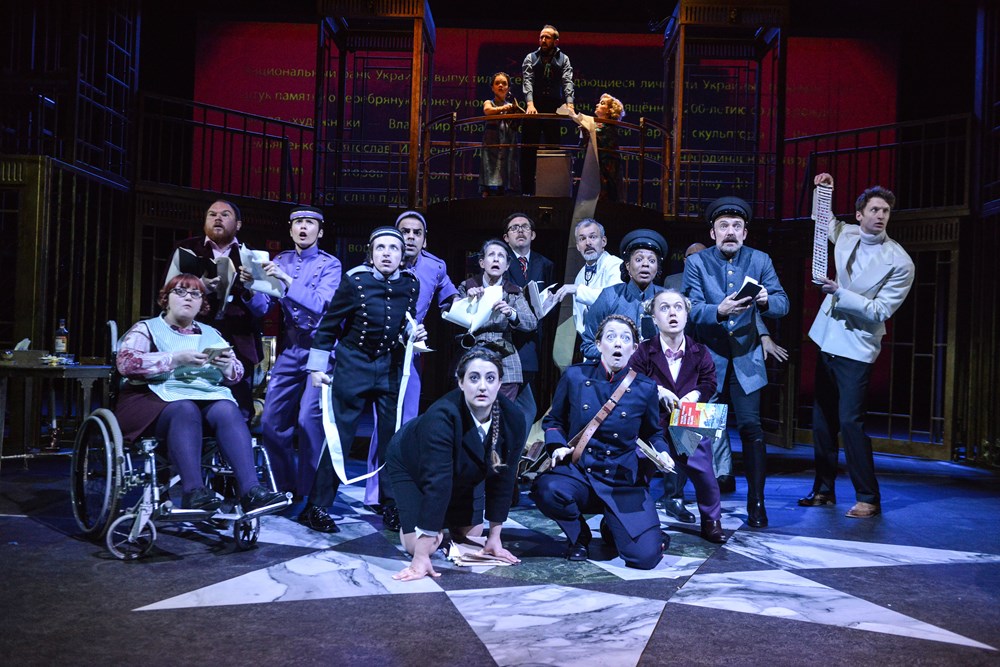 As previously mentioned, the performance is spoken but entirely translated into BSL and surtitles to suit the characters’, actors’, and audience’s needs. The Judge even speaks entirely in sign, allowing the hearing audience to read the surtitles and leading to some hilarity when the signs display an ‘Error’ message during her conversation with Khlestakov! Other than this instance, however, the interpretation functions as a seamless part of the performance; it is never invisible – that would defeat the point – but another layer of voices makes the performance both more accessible and more cacophonous. And in this farce, cacophonous only adds more fun.

The production design and performances were all first rate. The setting is updated from the 1830s to a 1920s Art Deco scene, providing opportunities for comedy with the Mayor’s elevator and a lavish reception for the ‘Inspector’. The performers are uniformly terrific – while all play exaggeratedly comic characters, the vivid and varies people they bring to life makes each wholly engaging. No jokes are missed, yet none of the humour feels forced. There is a relentless energy to the production, and while it never flagged it seemed to pick up pace and energy in the second act – a feat for any comedy, but the sign of an excellent one!

In short, this delightful, madcap production of The Government Inspector could be considered flawless, and its integration of accessible storytelling with the original plot heightens both while leaving nothing to be desired. It could not be recommended more highly.

The Government Inspector is playing until 28th May at Theatre Royal Stratford East. Performances are at 7.30pm and tickets range from £8-20.