Review of: The Forbidden Zone

Produced by:
14-18 NOW co-production with the Salzburger Festpiele

The Forbidden Zone is far more than a play; it is a fusion of live stage acting with simultaneous filming, streaming and editing to produce a real time film close-up of scenes on an overhead screen. This spectacular performance is genre-defying, and absolutely breathtaking to watch from start to finish.

The audience streaming into the Barbican’s main theatre to see The Forbidden Zone very quickly abandon any traditional notions of theatrical performance when confronted with Katie Mitchell’s latest development of her revolutionary ‘Live Cinema’ genre. Commissioned by the 14-18 NOW project as a way to bring the experience of women in the First World War to the forefront of the arts, The Forbidden Zone is far more than a play; it is a fusion of live stage acting with simultaneous filming, streaming and editing to produce a real time film close-up of scenes on an overhead screen. This spectacular performance is genre-defying, and absolutely breathtaking to watch from start to finish.

The Forbidden Zone is based on a multi-layered set from designer Lizzie Clachan that purposefully obscures as much as it reveals. A life-size three piece subway carriage runs on linear tracks at the front of the stage, alternately shutting off and revealing a line of shoe-box locations behind, laid out in a non-geographic row like a film set. The open plan, shifting nature of the set and network of windows through the train and into other locations mean that you can see actors and stage crew preparing for upcoming scenes,  offering intriguing glimpses of how this Live Cinema is orchestrated. Essentially, there are three levels of performance to concentrate on; the stage acting, the simultaneous film, and the very much ‘in front of the scenes’ performance preparation and genius choreography of camera gods Andreas Hartmann, Stefan Kessissoglou and Sebastian Pircher. These three levels build up a mesmerizing visual symphony, with each scene a masterfully conducted interplay between the three elements.

The dominating cinema screen hangs over the set, where the live feeds from multiple cameras are cut and streamed into a seamless piece of simultaneous cinema. The audience’s focus is primarily on this screen, the stage action being secondary to the point that some of the scenes take place completely screened from view, with your only viewpoint being that of the cameras. The people on stage (the actors, cameramen, and stage crew) become footnotes, interesting illustrations of how theatre and cinema are created by a behind the scenes team that are rarely spotlit. Their tight choreography is mesmerising, as they set up around each other, achieve such smooth costume changes that actors (particularly Jenny König as Claire Haber) seem to be in two places at once. This show makes you seethe at how long it takes Hollywood to make a film – here I saw an entire feature-length shot and edited in real time across one and a half hours, and had all the fun of figuring out how the cameras were lying at the same time, with crash mats for more physical scenes and clever angles allowing some scenes to start before their actors had made it across from the other side of the stage, unhidden from the auditorium audience but never realised on screen.

This is digital innovation at its absolute best – I don’t want to have an ‘interactive theatre experience’ that makes me download an app on my phone but leaves me emotionally un-engaged, and I don’t want to wear a virtual reality headset. The Forbidden Zone feels like the future of digital enhancement in theatre – just as cutting edge but more authentic, less gimmick driven and consequently far less obnoxious than other digital competitors. In fact, even calling it ‘digital’ feels like a betrayal, an inadequate description that does not do the complexity of The Forbidden Zone justice. If there’s any truth in the modern cry that audiences can’t sit through straight theatre anymore, then Katie Mitchell has found the answer. 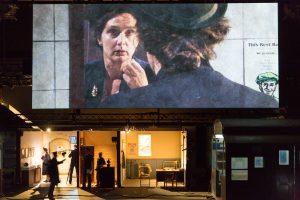 The Forbidden Zone explores the impact of the First World War on three women, operating on a par with a Greek tragedy by illustrating how the tragedy of conflict can echo down and affect generations of the same family. The narrative is based heavily on the true life events of Clara Immerwahr (Ruth Marie Kröger), the wife of scientist Fritz Haber who was instrumental in enabling the use of poisonous chlorine gas as a trench weapon, and her granddaughter Claire Haber (played by Jenny König), who worked in Chicago on antidotes to the same poison warfare in 1949. A third character who lost a young soldier love in the first attack, and who subsequently works with Claire in the laboratory is invented, but based heavily on the real life accounts of nursing in the front line (the ‘forbidden zone’) by Mary Borden.

Duncan Macmillan’s script draws heavily on texts from Borden, Hannah Arendt, Virginia Woolf and others, giving his characters’ vocal pacifism a conviction and gravitas that mirrors that of these extraordinary women. The female experience of war is not as marginalised as it once was, particularly in the arts where a more cynical person could suggest that the increasingly popular female narratives allow the avoidance of having to controversially glorify war or sacrifice, and so The Forbidden Zone hardly breaks a wide-held silence of the female voice. And yet, in highlighting that war kills so many more than soldiers, without minimizing the male sacrifice, The Forbidden Zone expertly shows that women, as well as the descendants of war-torn generations, are just as deserving to be considered as comrades as the fallen in battle.

Mitchell’s Live Cinema shifts the parameters of what is required in the cast’s performance – cinematic silence, rather than the more theatrical Pinter kind, and the harnessing of behind-the eyes emotions as opposed to physicality, were particularly well executed by Ruth Marie Kröger, and set a high bar for the rest of the cast to follow. Jenny König masterfully played out her character’s ethical conflict, and made particularly nuanced use of her more physical scenes to draw the audience’s attention back to the stage. Actors more used to theatre work would have struggled with this set up, but rarely did anyone’s performance come across as too obvious or unsuited for the microscope of the screen. Similarly, the challenge of lighting the set for both levels of performance was inventively met by Jack Knowles, who created subtle visual affects that flawlessly translated to both screen and stage.

There is no doubt that Katie Mitchell is one of Britain’s most innovative and internationally critically acclaimed directors, and yet we’ve been a slightly remiss and unwelcoming home for her over the past few years. First pioneering her ‘live cinema’ genre in 2007 with an adaptation of Virginia Woolf’s The Waves, she has increasingly found her work more favoured abroad – The Forbidden Zone was fostered by the Salzburg Festival and the Schaubühne in Berlin, travelling widely in mainland Europe before finally reaching London, 2 years after it opened. I very much hope that this marks a period of return for Katie Mitchell’s work, and that London can get to witness the next exciting chapter of her work.

The Forbidden Zone continues it’s run at the Barbican until 29th May, and you can buy tickets from their website.