Disclaimer: This article was originally intended to be a review of Reassembled, Slightly Askew – an immersive, binaural audio-based artwork based on writer Shannon Yee’s experience of brain trauma and disability. Unfortunately however, the show was interrupted midway by a fire alarm, which at first the whole audience took to be a part of the show itself. After talking with the writer, we decided it was best to write about my own particular experience of the show rather than attempt to reconstruct a review. So here are my reassembled thoughts on Reassembled, Slightly Askew. 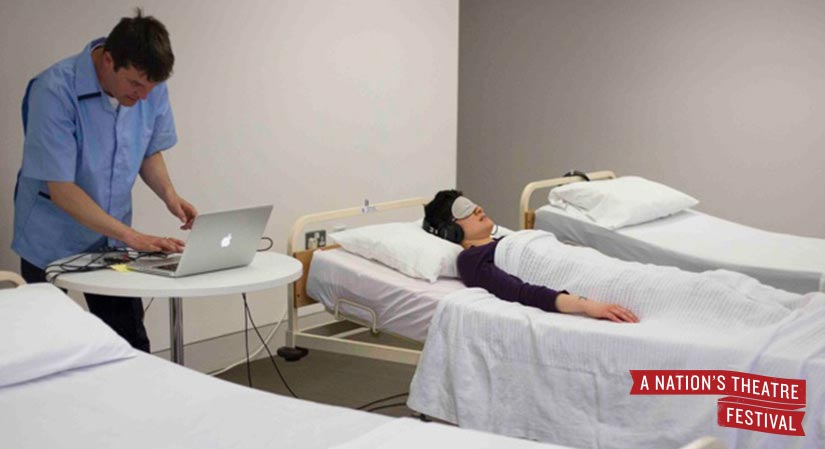 Panic. That’s the first feeling. Despite the utter calm with which we were welcomed to the space, gently guided to our beds and introduced to the blindfold and headphones that would confine our world for the next forty-eight minutes, the first feeling when they were placed over our eyes and ears was panic.

We had been assured that we could remove either at any time, should we find ourselves growing claustrophobic. I did, almost instantaneously. However, I knew that if I did opt to remove my blindfold or headphones during the piece, then the immersion that its whole foundation would be shattered. So for me, it wasn’t really an option. Besides – I had a review to write.

So I knew I was stuck there, lying in a bed, without my sight or my shoes, cocooned inside my own head – forced to glimpse into what I knew had been a harrowing experience. For however long the play would last – because suddenly, that forty-eight minutes seemed like an impossibly long time, and I was equally uncertain if I had made this figure up. I knew the tricks that binaural sounds can play on your imagination – but all of this was even before the play had properly begun. We’d only really taken our seats.

Hence the panic. But if the mere idea of forty-eight minutes of disorientating voluntary confinement was enough to spark panic in this squeamish would-be reviewer, imagine the feeling of facing it for life?

This was the lot of writer Shannon Yee, who in 2008 fell critically ill with a rare brain infection. As audience members of Reassembled, Slightly Askew, we experience from inside Shannon’s head her hospitalisation, descent into a brain coma, surgeries and rehabilitation. And if the show is effective in giving us a sensation of what this ordeal must have been like, it is even more effective in communicating the gulf between our experience and that of the woman who was once told that half of her body would be paralysed for life.

The piece effectively exploits the mind-tricking powers of binaural sound technology. The spatial positioning of sound creates a mental image that leads to vivid sensations when given certain stimuli. I am sure I am not the only audience member to flinch each time Shannon’s IV tube was inserted. Another particularly memorable moment was the certainty that, prior to surgery, a spinning circular saw blade was descending towards my frontal lobe. The sound design from Paul Stapleton is extraordinary throughout, combining the uncomfortably recognisable and the abstract. If anything, the latter is more unpleasant, as your brain struggles to reconcile what you think is happening (sound, after all, is your only referent in this production) with what sounds like organic cocoons being pulled apart.

There are other ways in which our experience diverges from Shannon’s. Whilst she had limited control, we have both full control and no control at all. It is as if we are experiencing locked-in syndrome within Shannon’s body. The choice to make this work as a piece of theatre is inspired here – even cocooned inside our own heads, we were all still aware of the other audience members around us and were unlikely to vocally respond to the questions being asked of Shannon.We are essentially mutes, again both voluntarily and non-voluntarily. Similarly, the lack of feedback in terms of our ability to respond to what is being asked of Shannon is disorientating. As Shannon discovers she is unable to use her left arm, I found myself instinctively clenching and unclenching my left fist. What emerges is a conflict between the identity we understand through our relationship to our body, and what our brain is telling us as responses to external stimuli. You feel trapped in an alien body, seemingly unresponsive to your commands.

It is a shame, although no-one’s fault, that the show was interrupted nearly half-way through by a fire alarm. Standing (still shoeless) outside the Battersea Arts Centre, I could confirm with the rest of the audience that the interruption had seemed at first another element of the sound design. The actress-nurse, running into the room to wake us all up, had a tricky time convincing us that this was not all part of the production. I admit to being half-convinced of a stunt to fool a gullible reviewer. Returning to the room we opted to continue the piece from where we had left off, which I regret.

Readjusting to the show’s rhythm was, in a way, a useful counterpoint to Shannon’s readjustment to life outside of the hospital. I felt constantly a little out of step, half between waking and dreaming, unable to quite place myself within the head of another again.

The second half contained one especially beautiful moment, however. Reunited with her partner after an evening’s absence, Shannon finds herself crying and then laughing at herself for crying. It was here that I found myself laughing with her – the first time I had vocalised a response to Shannon’s experience in the show. When art and medicine collide, it was comforting to find that laughter is infectious.