Seven years after its launch, TakeOver Festival 2016 is celebrating its homecoming to the newly renovated York Theatre Royal, by inviting audiences of all ages to an unforgettable multi-arts festival from Tuesday 12 – Sunday 17 July. This annual event is run entirely by 12- to 26-year-olds who, with support from York Theatre Royal staff, have programmed, prepared and produced a line-up of theatre and events welcoming the inquisitive, the adventurous and the imaginative. This year’s unique programmme centres on the idea of returning to your roots, focusing on the idea of how ‘home’ intertwines itself within our everyday life, and includes everything from new writing commissioned exclusively for TakeOver in Pandora, to promenade street performances in Boy Meets Girl and homegrown local talent spotlighted in The Beggars of York.

This year’s festival will open with a unique opportunity to experience the circus as never before. In a one-on-one intimate event, award winning trapeze artist Ellie Dubois directs Francesca Hyde who will amaze and dazzle in her stunning aerial performance, Ringside,performed solely for one audience member at a time. Marvel at her talent in an up-close-and-personal performance providing a glimpse behind the glitter and bright lights of circus life for one night only on Tuesday 12 July.

After appearing at TakeOver Shorts in 2015 and winning the public vote to be developed further, The Beggars of York returns to TakeOver on Tuesday 12 and Wednesday 13 July in an exciting mix of poetry and performance written by the critically acclaimed local poet, Don Walls, in homage to his son. Join Tiny Windows Theatre Company as they explore the poignant issues surrounding those who have experienced homelessness in the city and the trying social conditions under which they live. A percentage of proceeds from these performances will be donated to York based charity, SASH.
Direct from a sell-out London season and the Edinburgh Fringe 2015, Seabright Productions present fantastic family entertainment in Dinosaur Park (The Jurassic Parody). Now touring the UK for the first time, Dinosaur Park (The Jurassic Parody) offers an epic adventure of show-stopping, spine-tingling theatrics suitable for all ages on Wednesday 13 July. Join the Park family in the unlikely setting of Lyme Regis Community Centre, as they embark on a journey to a misty past underscored by the rapturous roar of DIY dinosaurs. This award-winning, laugh-out-loud spin on Spielberg’s classic Jurassic Park, is a theatrical celebration of cinematic nostalgia.

Following a world premiere at LGBT art and culture festival, Homotopia, and a hugely successful run at London’s Soho Theatre, Le Gateau Chocolat takes to the Main House stage on Thursday 14 July. Le Gateau Chocolat:Black is an intimate and confessional portrait of Nigerian singer Le Gateau Chocolat’s life; his hopes, his fears and his battle with depression, interjected with an impressive repertoire of songs from Wagner to Whitney Houston in a captivating cabaret show.

Younger audiences will enjoy The Star Seekers presented by family theatre troupe, The Wardrobe Ensemble. This brand new family show combines the silly and the serious on Thursday 14 July, in conjunction with an exclusive schools workshop facilitated byTakeOver Education Associate, Charlotte Lade. This unique experience illustrates the majesty of galaxies and the solar system, delving into some of the greatest unanswered questions of the universe. An energetic journey through the stars where the intellectual and emotional collide. 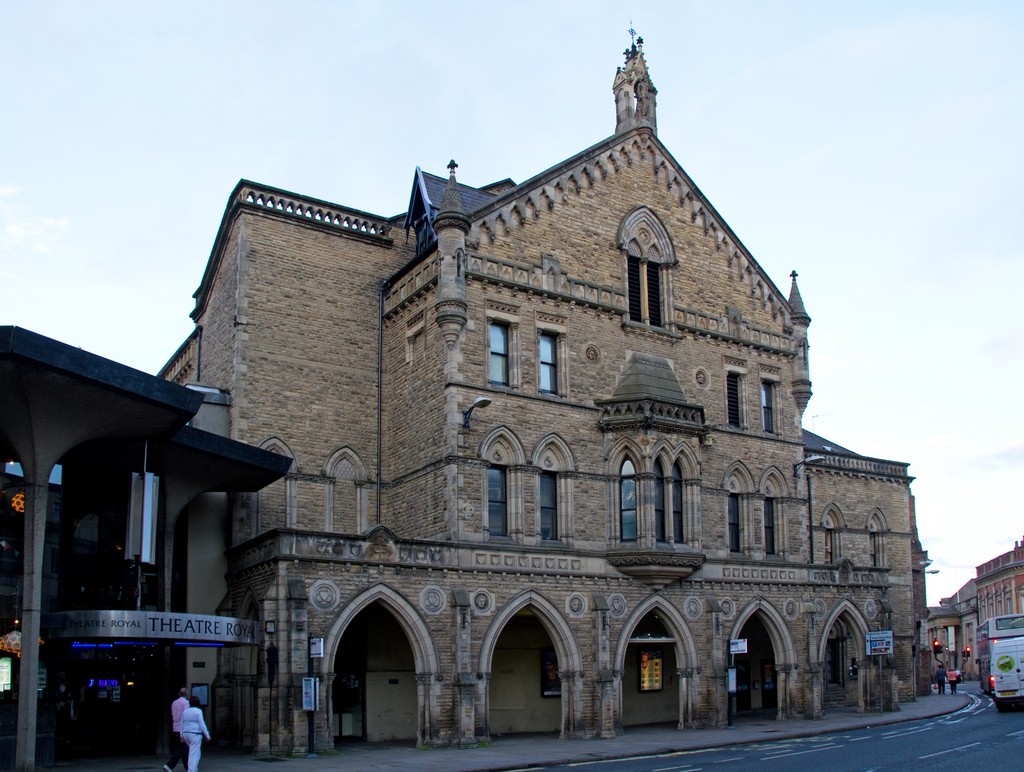 The Main House audience can be transported to foreign climes on Friday 15 July as Theatre Ad Infinitum perform their latest production, Bucket List. Far away, in a Mexican town, an orphan girl shows an unusual talent for chess. Leaving a life plagued by violence, she moves to the USA but terminal illness forces her to return to Mexico where a devastating discovery fuels her desire to seek revenge. Theatre Ad Infinitum bring to life this adventurous exploration of life and death through physical storytelling whilst illustrating life amidst the turbulent US-Mexican relations and the global capitalist system.

Following its success at TakeOver Festival 2015, Coal in the Garden (co-written by Lizzy Whynes and Rab Ferguson), returns to the Studio on Friday 15 July in a thought provoking new mixed media performance, Memories of Coal. Curated by TakeOverAssociate Director, Ben Cain, the piece features an artistic blend of theatrical storytelling, documentary videos from York’s elderly residents and a brand new devised performance by youngsters from across the city. This cross-generational community project examines how perceptions of childhood have changed throughout the years and asks what exactly is different for children growing up today?

Also showing in the Studio on Friday 15 July, is the newest show from On The Run (in association with Show and Tell) following a sell-out success at Edinburgh Fringe Festival 2014. With expert direction from Chris Harrisson, Tell Me Anything follows David aged 15, who loves punk, house parties, poetry and most of all, Kate. This 21st century comic love story sensitively explores the social challenges of eating disorders and the trials and tribulations of growing up.  A bold, touching and truthful one-man show.
This year’s line-up presents something a little different on Saturday 16 July, inviting audiences to follow promenade piece, Boy Meets Girl, around York’s cityscape. Brought to TakeOver by the innovative ZEST Theatre, the audience will journey with Boy and Girl through the highs and lows of falling in love through an eclectic mix of silent disco technology, theatre, music and dance. Created for public spaces, this interactive performance allows audiences to follow either Boy or Girl, (or both) around the much-loved corners of the city as they are invited to listen to the characters innermost thoughts through wireless headphones, placing audiences right at the centre of the action.
On Saturday 16 July, join award-winning theatre company, The Human Zoo, in the Studio for an intimate Tim Burton-esque patchwork of puppetry, poetry, movement and live music stitched together with explosive visual imagination. The Girl Who Fell in Love With The Moon sets out to explore humanity’s eternal fascination with the skies through the eyes of this playful and dynamic young ensemble. A magical production of devised storytelling from a female-lead company producing fresh and engaging new work.

Written by award winning playwright, Jenna May Hobbs, Captured showcases top-quality devised theatre from White Slate Theatre Company. Using an innovative series of projections, Captured tells the love story between an artist and a photographer, exploring the complexities of human relationships with delicacy and sensitivity.The past and present collide in a whirlpool of forgotten images and repressed words, blurring perception and reality. An ideal show for young people and teenagers on Saturday 16 July.

The newly remodelled Main House stage will be host to Pandora on Saturday 16 July, a raw and honest newly devised production from TakeOver Artistic Director, Lizzy Whynes, who explores the depths of her own post-traumatic stress disorder through the narrative of this creation story. Zeus gave his daughter a box containing all the evil in the world; but she didn’t want it. Tormented by its contents Pandora opens the box to find she has been made an accomplice in unleashing a world of horrors. Through a blend of dance and devised theatre, this uplifting hybrid between an autobiographical story and ancient myth, will show that everyone can find hope in the darkest of places, as hope is the antidote for suffering.
Cementing its reputation for community engagement, TakeOver is proud to welcome York Theatre Royal’s Youth Theatre on Sunday 17 July as they perform a stage premiere of critically acclaimed playwright Mike Kenny’s new work, The Forgetting. Involving cast and crew members ranging from 8- to 16-years-old, this production tells the story of an old man suffering with dementia who wakes up believing that he is a 10-year-old boy. This touching tale follows him and his fellow residents in Evergreen Care Home, reminding us to live life to the full no matter how old you are. Showcasing York’s bright, young talent, this production will conclude the festival celebrating all that TakeOver stands for.
TakeOver will continue its commitment to provide a wide selection of outreach opportunities for the local community with several interactive events throughout the festival, beginning with The Great Yorkshire Gob-Off hosted by performance poet Dave Jarman on Tuesday 12 July in the newly refurbished York Theatre Royal Bar. This free event will see poets from local universities facing off against an all-star team from across the wider city. For those interested in staying on at the theatre for refreshments and further entertainment after the Main House shows, TakeOver will be bringing you the very best in local music, comedy and cabaret talent in a series of TakeOver Lates throughout the week. Young dramatists over the age of 14 are invited to an exclusive Frantic Assembly workshop on Sunday 17 July that will leave participants with the skills to develop their own work in a more physically interesting way. TakeOver is also hosting several post show discussions after select performances with informal and intimate Q&A session with writers, directors and actors featuring in the festival line up, which are open to everyone.
This year’s festival offers plenty of opportunities for young people and school students to get involved, including Access All Areas, (an under 16s group where volunteers can learn about the 2016 programme in detail) S.P.A.C.E, (an interactive workshop held over four weeks with Wilfrid’s Primary School) and the Coal in the Garden Tour, (a schools-only tour taking place on Monday 11 – Tuesday 12 July at assorted primary schools across York, followed by interactive drama workshops.)
This Summer, the TakeOver Festival 2016 programme promises a week of pioneering new productions and fresh talent as it returns to its iconic home in both the Studio and Main House, presenting something for all ages as we celebrate the rebirth of York Theatre Royal. The festival tickets are on sale now. For more information or to book tickets visit www.takeoverfestivalyork.com, www.yorktheatreroyal.co.uk, or call the Box Office on 01904 623568.