The Stephen Sondheim Society and Mercury Musical Developments today announce the 10th anniversary West End Gala for the Stephen Sondheim Society Student Performer of the Year and Stiles + Drewe Prize. To mark this special landmark occasion, the 2016 competition is being staged at the Novello Theatre in London on Sunday 15 May, hosted by star of stage and screen Julian Ovenden (Downton Abbey, Sunday in the Park with George, Merrily We Roll Along, Sondheim 80th Birthday Prom). In addition to this, among this year’s judges will be Don Black, Jason Carr, Anne Reid MBE, Sondheim Society Patron Julia McKenzie and Olivier Award-nominated actress Sophie-Louise Dann, reuniting her with Ovenden after they performed together in Sunday in the Park with George at Théâtre du Châtelet in Paris. Furthermore, writer and broadcaster Edward Seckerson will Chair the Student Performer judging panel.

This year the annual gala will be directed by Chris Hocking and with musical direction by Mark Warman and promises to include a sneak preview of a song from one of the three new Stiles + Drewe musicals that are premièring in 2016.

This annual competition, produced by The Stephen Sondheim Society and Mercury Musical Developments, seeks to award the best student performer from the UK’s many musical theatre courses with a £1,000 first prize. In addition, the Stiles + Drewe Prize supports and develops new musical theatre writing via its two distinct arms. Recognising an outstanding song from a new musical, the winner of Best New Song receives a prize of £1,000 to put towards developing their work. This year, Stiles and Drewe launch their inaugural MTI Mentorship Award, supported by Music Theatre International.  One new musical and its writers will be selected to receive mentorship over a 12-month period, culminating in an industry showcase. Stiles and Drewe won the first Vivian Ellis Prize in 1985 for their musical Just So, which introduced them to the major heavyweights of the musical theatre world and made an enormous impact at the beginning of their careers. The MTI Stiles + Drewe Mentorship Award aims to give a similar kick-start to the next generation of musical theatre writing talent. 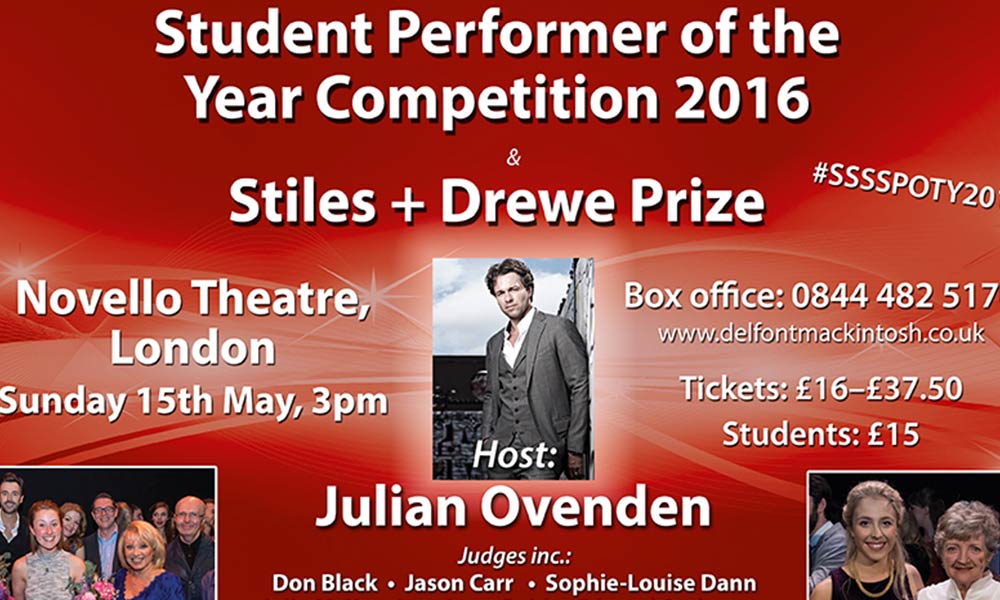 Olivier Award-winning writing duo George Stiles and Anthony Drewe said today ‘’It is fantastic that once again this event will be showcasing new musical theatre writing, something we have long supported. We are delighted that for the 9th year we will be recognising an outstanding song from a new musical. We are also proud to expand the Stiles + Drewe Prize in 2016 to include our new Mentorship Award, generously supported by Music Theatre International.’’

The event will present a wonderful afternoon of Sondheim classics – sung by the UK’s top student performers and featuring the best of new musical theatre writing.

The Stephen Sondheim Society Chairman Craig Glenday said today “We had 80 musical-theatre students apply this year – the most we’ve ever had to audition – and the standard is very high. The 12 finalists represent the very best of UK music and drama schools, so it’s going to be wonderful afternoon of Sondheim classics, mixed in with some of the best new writing for the stage. Stephen Sondheim himself insisted that the event should showcase not only emerging student talent but also new musical-theatre writing, so we’re also proud to share the day with the finalists from the Stiles + Drewe Prize.”

Executive Director of MMD Victoria Saxton said “Allowing emerging writers the chance to showcase their material on a West End stage is invaluable. Since winning the Best New Song Prize in 2015, Richy Hughes received his first professional commission for Mr Popper’s Penguins by Olivier Award-winning producer Kenny Wax. Writing a musical is really hard and takes a long time – which is why we’re especially delighted to be working with Stiles and Drewe on the new MTI Mentorship Award so that we can offer sustained developmental support, alongside this showcase element.’’