For the past 40 years Liz Aggiss has been re(de)fining her own brand of performance, blurring the boundaries between high art and popular culture. In this solo performance, Liz Aggiss places herself centre stage to unpick the disorientating display of contradictions and interpretations on girls, ladies, women, mummys, mothers, bitches and dogs, pensioners and senior citizens. Decoding mythologies, platitudes, refrains and old wives’ tales, over three acts, the performance navigates itself into a feminist soup.

Slap & Tickle aims to beat a path through the personal and historical, challenging perceptions of what a mature female dancing body should be doing, why she should be doing it, and where it should be done.Presented on a stage littered with aural and visual collage, Slap & Tickle plays with form, lurching relentlessly from spoken word to expressionism, music hall, costume change and prop manipulation. 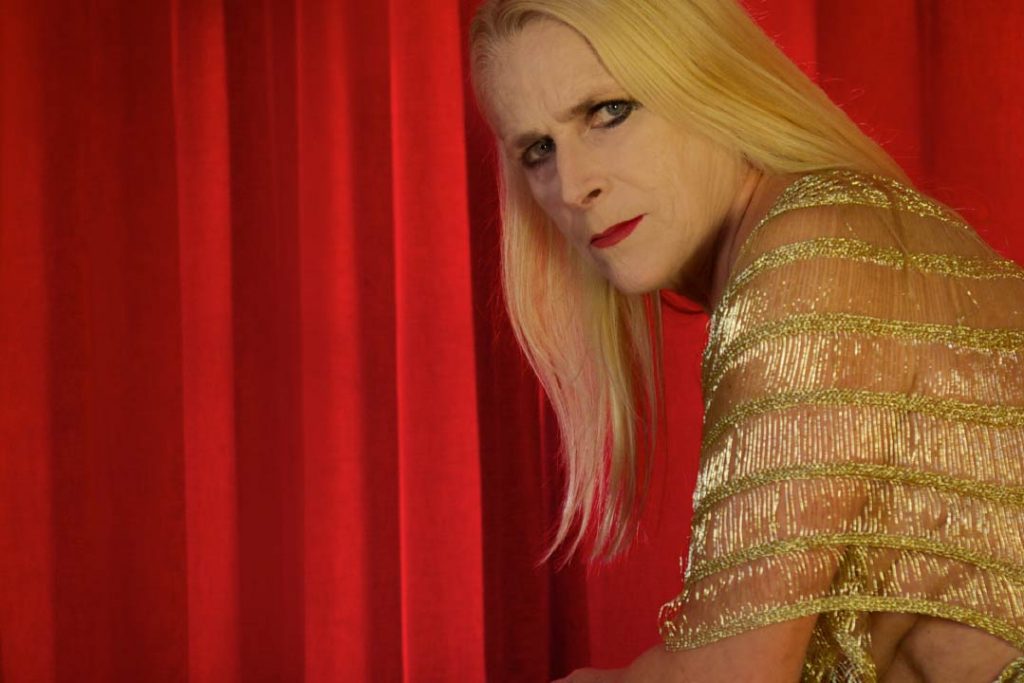 Speaking about the show Liz Aggiss said “As the title suggests, Slap & Tickle is a show of opposites; punishment and reward, push and pull, slap and tickle…..all the way home.  I use performance as a means to create a discussion, a dialogue about the observed and received cultural mores, forays and sexual taboos. I’ve been fully immersed in this conundrum and collage whilst self flagelating and shouting at myself in a mirror. I’ve seen the light and it’s time to release the drama. Bring it on! I first performed at the Place in 1987 Spring Loaded season and am delighted to be returning to The Place to share this work with audiences in London.”

Liz Aggiss is a live artist, dance performer, choreographer and dance film-maker. She studied dance in London and New York before beginning to develop her signature style of performance. In the 1980s she supported punk legends The Stranglers with her cabaret troupe The Wild Wigglers, before going on to create works includingGrotesque Dancer (1986), dance/opera duet the Falling Apart at the Seams (1994), award winning dance filmMotion Control (2002), Performance Lecture Survival Tactics (2009) and cross art performance The English Channel (2014). Her work is framed by extensive contextual research that considers and uses the personal and historical as reference. Her performances have a distinctive expressive, grotesque and British music hall movement style, and integrate text, film and humour.

“Slap and Tickle is dance/comedy/art (delete as appropriate) that makes the audience snort, howl and cackle with laughter. It’s a rich and visual collage of womanhood and even though Aggiss actively embraces the maverick tag, she’s exploring and presenting a world that every woman can relate to.” Ian Abbott, Writing about Dance