Review of: Running Wild at the Regent's Park Theatre

Running Wild is a play with a beautiful setting and brilliant puppetry, albeit also a few flaws.

This is a very ambitious production. In turning Michael Morpurgo’s book into a play, Regent’s Park Theatre have created their largest-scale production to date, with a cast of 40 and a range of puppets created and directed by Finn Caldwell and Toby Olie, who previously worked on War Horse. Originally at the Chichester Festival Theatre, this production benefits significantly from the near perfect setting of Regent’s Park, which provides an ideal back-drop for the Indonesian jungle. Quite logically the production is being done in partnership with nearby London Zoo.

Traumatised by the death of her father in Iraq, Lilly (or Will depending on which of three actors has the lead) is taken by her mother on a dream holiday to Indonesia in 2004, where she is thrilled to be taken for a ride on her favourite animal, an elephant. Fortunately for Lilly, Oona the elephant senses the impending tsunami and runs for the jungle, thereby saving her from the tidal wave that kills her mother. Oona and Will develop a close relationship as they struggle to survive the threats of dangerous animals and ultimately very dangerous humans as they negotiate the jungle. 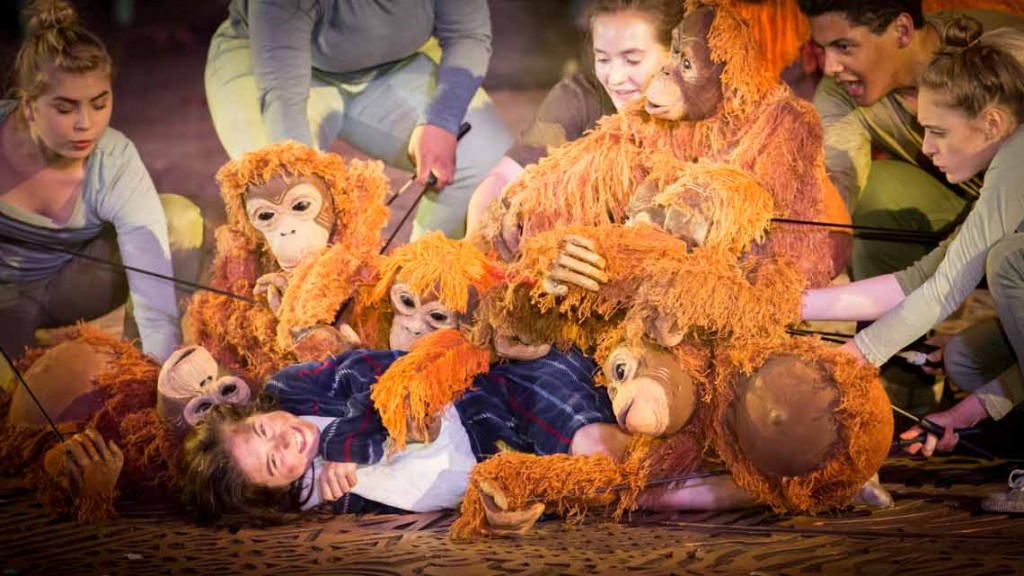 The puppetry is an absolute delight with, as in War Horse, the presence of puppeteers being easily ignored as the movements and behaviour of the animals is perfectly captured. Oona is a great feat of design and has real character, while the troupe of Orang-utans is utterly charming as they get to know Lilly. The staging is also superb, especially as the tsunami hits and the members of the stalls have the wave wash over them.

The denouement of the story is touching and very well acted, but there are issues with the production. Firstly, the large cast works very well in scenes such as those where they convey a tranquil ocean that develops into the tsunami, but at times we feel like we have walked in on an improv theatre workshop.

Secondly, the play occasionally loses its identity, with the music and acting seemingly more at home in Africa rather than Indonesia. Finally, one can question the lack of subtlety in the way the play delivers its message regarding man’s abuse of the forests and the animals. Samuel Adamson’s adaptation is ultimately a play for children, but I would see few being convinced that they should reject a packet of crisps on the way home due to the implications of man’s obsession with growing increasing quantities of palm oil.

However, these criticisms do not negate the beauty of the setting and the brilliance of the puppetry. The acting performances are strong, particularly Hattie Ladbury as Lilly’s mum and later Dr Geraldine, and, Ava Potter as Lily is a star in the making.