Review of: Richard II at the Arcola Theatre

Arcola Theatre’s most recent Shakespeare production heralded a landmark performance two weeks ago, when it became the first play ever performed in the Houses of Parliament. Considering the modern-dress Westminster design, the historical Richard’s deposition taking place near that site, and the four hundredth anniversary of the iconic playwright’s death, it was certainly a fitting performance for the milestone occasion. The buzz continued with a sold-out production at the Arcola on 4th May, where the production transfers for another week.  This was a solid show, with some clever directorial choices in the updating and the actors’ clear understanding of the text. Unfortunately, anniversary and Parliament premiere notwithstanding, the promising production did not fully satisfy.

The updated setting, while tailored for its initial groundbreaking performance, may have ultimately proved a downfall. Since the direction did not bring any inspiring choices to the production, Richard II set in Parliament seemed like an especially obvious, unoriginal choice. When the modernisation was fully committed to – the duel between Bolingbroke and Mowbray turning into a television debate, the gardeners becoming election night news commentators, and select speeches addressed to cameras for a broadcast audience – the performance founds its feet and was very enjoyable. Incidentally, these scenes were often the snappiest and most engaging.

While the show ran under two and a half hours including the interval, the varying pace between an intense driving political thriller and the stereotypical ‘stand-and-deliver’ approach made it difficult to focus at times. Another pitfall of the updating was the lack of death. Gloucester’s death prior to the play’s start and Richard’s at the end were the only ones kept; Bushy and Green merely resigned after sex scandals. This choice made Richard’s murder seem completely out of place and nonsensical, removing all pathos. Yes, death may not make as much sense in the political arena now as it did in the fifteenth century, but by selectively removing it the play’s illusion was shattered. 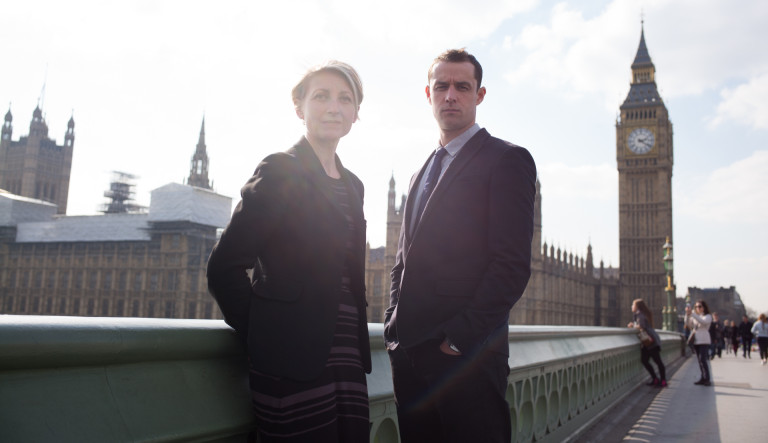 Lastly, a seeming lack of connection between performers and their roles irrevocably hurts the production. Perhaps it was an attempt to be ‘modern’, but the majority of actors kept the same tone of voice and pace throughout the whole piece, regardless of the situation. Richard especially jarred, as his inner journey usually carries the emotional journey of the play. Here, he aroused nothing but vague disgust. The outstanding exceptions to this were Hermione Gulliford as Bolingbroke and Natasha Bain as Isabel / Northumberland; both actresses kept varied tones, body language, and characterisation strong throughout and were endlessly watchable.

While certainly not a poor production, one wishes that a more careful look at the modernisation choices and text delivery had been implemented to keep the audience engaged throughout.  Nevertheless, it is a landmark production in Shakespeare400 and not without its positive points.