Review of: King John at the Rose Theatre

It is unsurprising that Trevor Nunn left King John to be the penultimate in his marathon attempt to stage every single one of Shakespeare’s plays (his A Midsummer Night’s Dream likely to be a far more satisfying climax later this year). It is an elusive text, grounded not only in the context of Lackland himself in the early thirteenth century, but also in Shakespeare’s England. The plot is driven by the legitimacy of the King John, crowned by his deceased brother’s will, trumping his own son’s claim to the throne. This is a patrilinear scrutinisation fit for the middle ages. Anti-papal imagery and a suspicion  of European powers runs throughout, and often untangling historical discourse from satire can be a tricky task.

Nunn certainly makes a decent stab at smoothing over some of Shakespeare’s creases. Embellishing the First Folio text with earlier passages from The Troublesome Reign of King John, the three-hour revisiting certainly maintained a fluid cogency throughout. It is interesting that Nunn seems adamant that this is a show fundamentally about ‘political decision making’ when his version, with a degree of papal pomp and hypocrisy, seems much more of a discussion on the tension between secular and ecclesiastical bodies.

The acting here sold what could have become an overly static and addled performance. Shakespeare, unfortunately, does no favours for women, leaving them entirely absent for the final two acts – a shame considering the superb performances from Lisa Dillon as the widow of Richard the Lionheart and son of Prince Arthur (the heir presumative) and Maggie Steed as Queen Elinor, who, with charismatic ease, added extra nuance to the role of John by showing his deep seated love for his mother. 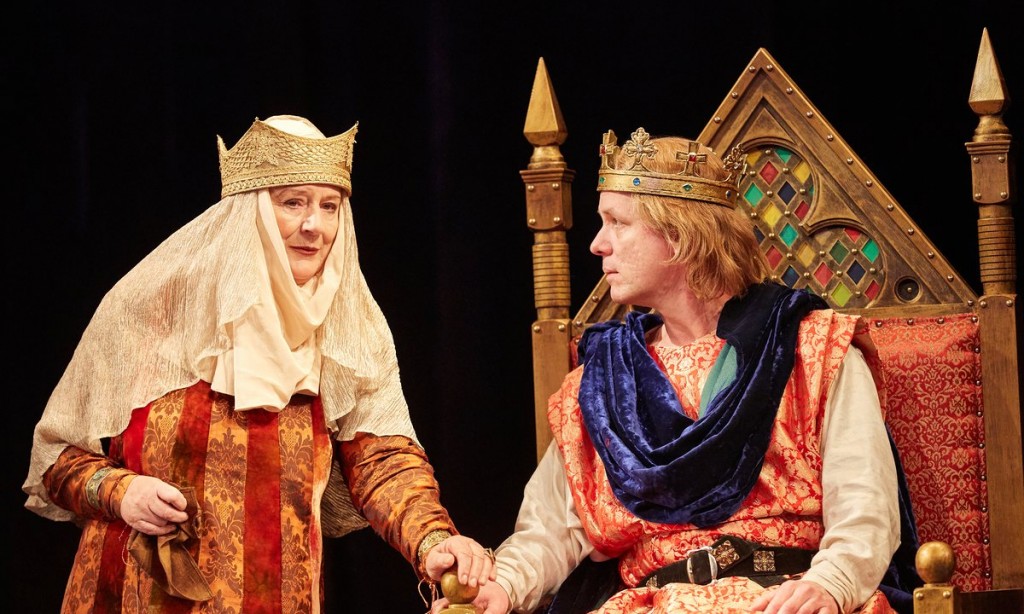 Jamie Ballard as the titular role certainly provided an intriguing portrayal of a much-maligned ruler. Not resorting to the maliciousness of Richard III or the femininity of Richard II, John is presented not so much as a flawed ruler as one governed and undone by circumstance – a pragmatic and secular being in a deeply religious period. We are meant, it feels, to sympathise with his plight, even as his kingdom falls around him.

Howard Charles (who is perhaps most recognisable for his role in The Musketeers) seemed to relish his opportunity, as Philip Faulconbridge the bastard (and largely fictional) son of Richard the Lionheart, to gallivant across the stage, milking every witty retort for all its worth as he sees through the ideologues he is surrounded by. It was energising to see him clinch every monologue, prowling triumphantly at every turn of events.

King John was close to being a pedestrian adaptation of Shakespeare – almost too swaddled in its own pomp to reach a spirited conclusion. Some choices (especially the use of projection, which felt throwaway, cheapened and useless) were questionable, but Nunn provided a solid enough piece of theatre from a largely flawed text.

King John will be playing until June 5th.