Review of: Jelly Beans at Theatre503

A chaotic representation of one man's journey from self-assertion to self-destruction, Kuleshov Theatre's 'Jelly Beans' at Theatre503 is the perfect theatrical treat.

After their critically-acclaimed production Cans debuted in 2014, Kuleshov Theatre and Writer/Director Dan Pick return to Theatre503 with Jelly Beans, an original play by Pick that follows a young man as his entire life unravels rapidly in a single day. The result? A grotesque and hilariously honest dark comedy-drama that, at its heart, uncovers a haunting vulnerability that permeates every single scene.

Jelly Beans is a one-man show that flourishes wonderfully with an absence of cast; our lead has enough energy, charisma and gravitas for a multitude of performers. A protagonist without a name, his anonymity serves to reflect the ‘the front lines of Generation Y’, though the thought is more than a little worrying; no one who falls under the umbrella term of the lamentable ‘Millennial’ would desire to be associated with such a creature. Played by Adam Harley, he is an exceptional narcissist, and is both a ridiculously gross exaggeration and an eerily recognisable representation of modern twenty-somethings. Do not mistake me, his actions border on sociopathic: his confidence ricochets between self-aggrandising statements (even at one point claiming that he was “the most beautiful child”, lording the fact that mothers preferred him to their own offspring) and moments of the most utter dejected wretchedness, as he is left isolated and covered in a variety of unsavoury substances. At his worst, he is a sadistically violent figure, whose lyrical prose acts as a monstrous companion to his visceral violence. In this regard, he is certainly not from ‘the front lines of Generation Y’ – he is a renegade cadet, running full pelt and screaming into the distance to face his enemies with his own brand of egotistical brutality. 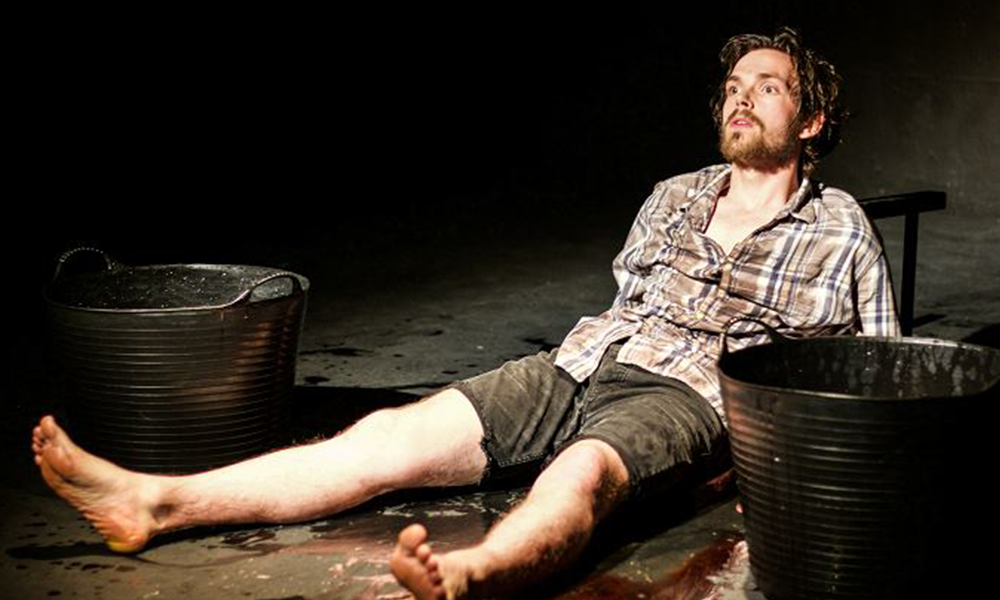 It is not this aspect of his personality that makes his character relatable – it is his subtlety and his pain, which lie at the root of his convoluted existence, that draws empathy from the audience. It would seem impossible that a protagonist with such vibrantly horrific actions could possibly be considered ‘subtle’ in any respect, but Harley and Pick uncover the character’s variant personality at exactly the right time; whenever the young man becomes almost unbearable, we are drawn into his past, into moments of comparative stillness and calm, where we are allowed to understand (at the very least) who he used to be. Harley is a master of both sides of his character, and although there were moments where he faltered with his lines, his performance bursts with a boundless vitality that is astonishing to behold. Special mention must also be given to Tim Boyd, whose lighting design for these contrasting scenes was gorgeous: at one moment, a soft blue light would fade onto the stage, a visual representation of our protagonist’s seeping remembrance of grief; at another, a sudden diagonal oblong of brilliant white light would appear, suggesting spatial dimensions of an open door or corridor, the harsh chiaroscuro both blinding and deadening in its vivid intensity. 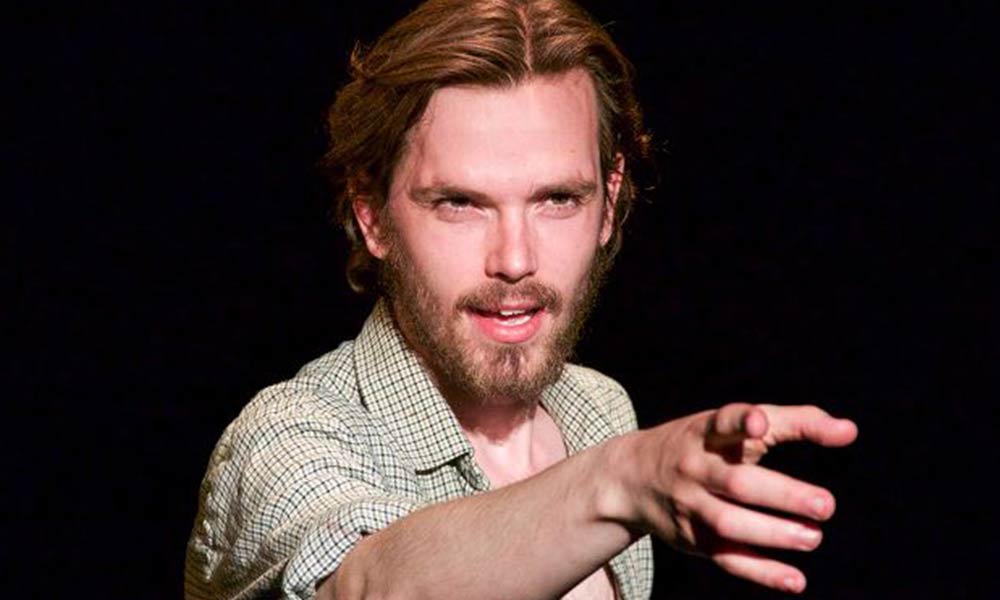 As if in purposeful juxtaposition to this onslaught of heightened emotion, the set had a rather simplistic design. Armed with just a chair and two buckets, however, Harley, Pick and Movement Director Jessica Boyd needed nothing else, as each object was used to its full potential throughout Boyd’s choreography. The buckets, filled with either water or red liquid, were splashed throughout various scenes; from one particularly brutal encounter, Harley’s skin and clothes were horrendously stained, the water daubed on his fervent brow as dripping sweat. Instead of simply covering himself in ‘blood’, Boyd’s choreography replicated an actual attack, and with each line of dialogue explaining every punch, stamp and pound, Harley attacked the bucket and its contents, creating a much more distressingly perceptible experience.

Dan Pick and Kuleshov Theatre’s Jelly Beans at Theatre503 is a tumultuous and dizzying display of one man’s journey from self-assertion to self-destruction. We are thrown into chaos at every turn, barely given a moment of respite as our protagonist darts between remembrance and his current pain – but this is the play’s greatest strength. Every motivation is played beautifully, each given due consideration before Harley hurtles head-first into the next. Jelly Beans leaves its audience in a state of unnerving mystery, waiting impatiently and hesitantly for the next emotive morsel, and the effect is an absolute treat.