Review of: Eggs Collective Get A Round at the Soho Theatre

Produced by:
The Eggs Collective

The Beach Boys’ wild enthusiasm was an apt choice for a recurring motif in the Egg’s Collective’s Get A Round show at the Soho Theatre. Playing with unexpected abruptness at sporadic points through the show, it was meant to signal the moment when the triumvirate of performers (Sara Cocker, Lowri Evans and Léonie Higgins)  climbed into the crowd with bottles of white wine (to accompany the shots provided at the show’s opening) and distribute alcoholic refreshment. For a show dealing with the ugly side of nightlife, this repeated refrain was used fantastically – slathering a show about alcohol and wild abandonment with actual alcohol and wild abandonment.

Get A Round had an immersive and refreshingly original timbre. The three performers, interacting with the audience (and providing handfuls of pork scratchings and Bombay Mix), straddled the line between comedy and cabaret with ease, leaving everyone feeling relatively amicable by the end. This was a candid show – one exploring personal experiences and satirising tropes surrounding millennial attitudes towards ‘the night out’, yet slowly descended  into murkier and murkier territories – highlighting the pitfalls and emotionally destructive consequences these nights could have.

For the most part, this was handled with ease, and the tonal transformation was an effectively executed procedure. As the actors swigged their bottles of booze and littered the floor with plastic and Wotsit packets, what emerged was a slightly grotesque realism that underpinned the performative nature of the characters. A physical and emotional decay ran hand in hand throughout the hour, and even as the Beach Boys returned time and again they seemed more and more misplaced and off-beat. For this, the trio must be entirely applauded.

The lighting, sound and design complemented this – especially when the house lights rose prematurely (akin to the moment when the house lights come on in a club, and you’re left staring agog at how messy the surroundings are and reality slowly re-embeds itself). The various bottles of booze acting as counterweights to microphones showed a form of connection between performance and intoxication – an easy symbolic assumption but a fun one to explore. 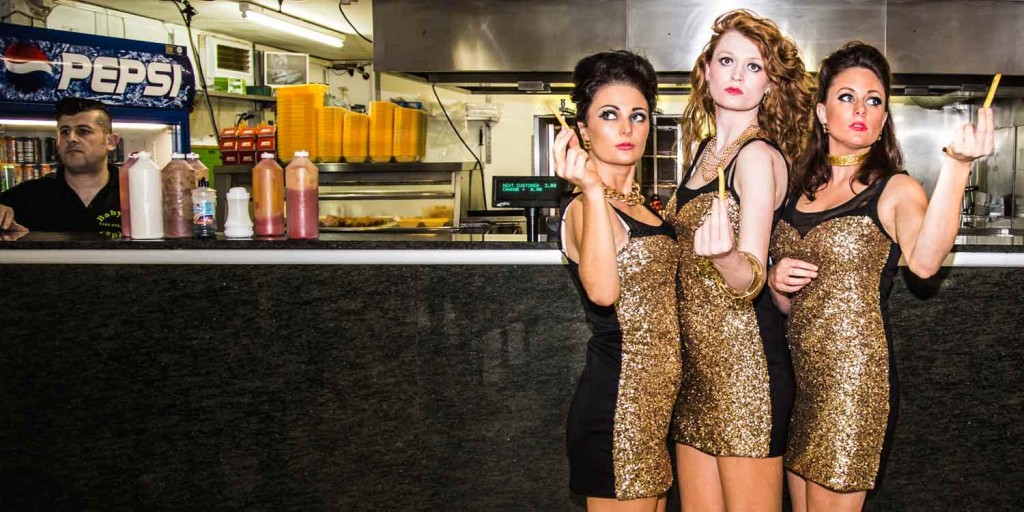 Get A Round’s flaws lay in pacing and structure. The content of the performance grew more and more episodic and fragmented as the time passed, with musical interludes that wore on for just a few minutes too long – almost as if the show needed padding. With these interludes lasting so long it undermined the flow of the piece – only a few minutes cut down could have had a significant impact.

Being the first one into the theatre, I never really shook the feeling that I was the sober one at the party full of people at various stages of drunkenness, be it the wild singer, the intense chatterer or the deflated ranter. For all the show’s immersion there remained a particular disconnect between performer and audience throughout – the Collective seemed to be having just that bit more fun onstage compared to those off. Whilst this was a symptom more of the show’s starting point rather than its conclusion, by slightly alienating the audience at the beginning it seemed to almost dampen the weighty conclusions of the end.

Get A Round is unusual and memorable – for that it is certainly worth catching. You may be on board from the beginning and lured in by their immersive and didactic antics (didantics?), but it was also possible to slip from the charted course.

Eggs Collective are playing until the 14th May at the Soho Theatre, and then they will be on tour following. More info here.