Review of: Blue/Orange at the Young Vic

Penhall's classic, Blue/Orange, is still as sharp as ever. 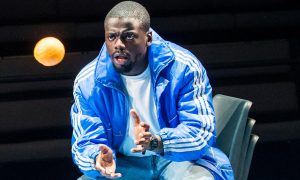 How do you revive a classic?
The Young Vic have revived Blue/Orange – by all accounts one of the best plays of the last 20 years, and with a stellar cast from 2000 watching curiously from the history books. However, with the NHS currently undergoing the biggest crisis since its founding, this is a canny selection by artistic director David Lan.

The story is this – young, idealistic doctor Bruce (Luke Norris) battles with an older, jaded consultant Robert (David Haig) over the correct treatment for Bruce’s mental health patient Christopher (Daniel Kaluuya). The young doctor knows Christopher should stay in the facility for longer so he can be properly diagnosed. The older doctor knows they don’t have the beds, and besides, Christopher doesn’t seem particularly crazy. The superbly twitchy, jumpy Christopher is caught in the middle, alternately angry and confused, as the levels of professionalism from the two doctors descend.

Joe Penhall’s script stands the test of time – it’s still fantastic. If it weren’t for the constant smoking in the consultation room, you wouldn’t know it was seventeen years old. Jokes about cuts and the pension age are even more prescient now, but Penhall’s politics are more acutely focussed on the personal. Yes, the lack of beds is often cited as an issue, but the real power struggle is between the consultant whose mind is already on the golf course and a junior doctor trying to do the right thing.

And this battleground is perhaps where this production falls down a little – Haig is no Bill Nighy (who played Robert in the original production), and Haig’s Robert comes off as a bumbler, rather than merely self-important. We start to doubt he has the authority he claims to hold, and wonder how this hospital ever ended up employing him at all, let alone promoting him.
The second act – which has rich potential for comedy – can only be funny if we believe that this ‘consultant’ would be legitimately stupid enough to try to explain his lectures (on the racism inherent in the NHS) to one of his black patients. As it is, the whole scenario is so unbelievable that this particular scene started to drag. However, this is nit-picking, as the vast majority of the show zips along with a frenetic, nervous energy; the third act is frankly breathtaking.

The play itself raises questions of class, race, sanity and subjectivity. Can anybody ever truly assess another person’s mental wellbeing? Is it possible to be objective? We can’t help but see each other through the prism of our own experience. And some people think oranges are blue.

Overall, this is a fine production. The interplay between the three is pleasing, the politics are prescient, the direction sound. Highly recommended.