Review of: Blind Man's Song at the North Wall

Produced by:
Theatre Re

Thin on plot and feeling, Blind Man's Song is nevertheless a sumptuous performance.

What other productions try to minimise, Blind Man’s Song, a performance piece touring Britain, Germany and France, joyfully brings to the fore. The squeak and creak of a wooden bed as characters move around on it; the short but not negligable time it takes to walk across a large stage; the rustle of a swinging skirt. We have, as audience members, been trained to ignore these kinds of verisimilitudes, which we tend to consider external to the fiction of the play. Not so in in this production by Theatre Re, in which the squeaks and rustles are looped and incorporated into an aural backdrop, and characters find a dizzying range of articulated ways of traversing and occupying space.

The three-piece cast consists of a man and woman (Guillaume Pigé and Selma Roth) in coordinated, vaguely roaring-twenties costumes, their heads clad all round in bandages. The third character, a blind musician (Alex Judd) in whose imagination, or memory, the other two seem to exist, sits at the piano in a wooden booth in the corner. There is a wheeled bed and otherwise the large, square stage it empty.

Playing piano and violin, and with the help of a loop pedal, Judd creates most of the show’s music live on the stage. This music, which Judd also composed, is witty and inventive, written in a smooth-edged minimalist vernacular that never climaxes but only layers itself more or less thickly as the piece ebbs and flows. Its incorporation of sounds from the (wordless) performances of the other two actors, as well as their frequent intrusions into ‘his’ part of the stage and interactions with him, blur the boundary between the action and the music, making talk of one without reference to the other meaningless. 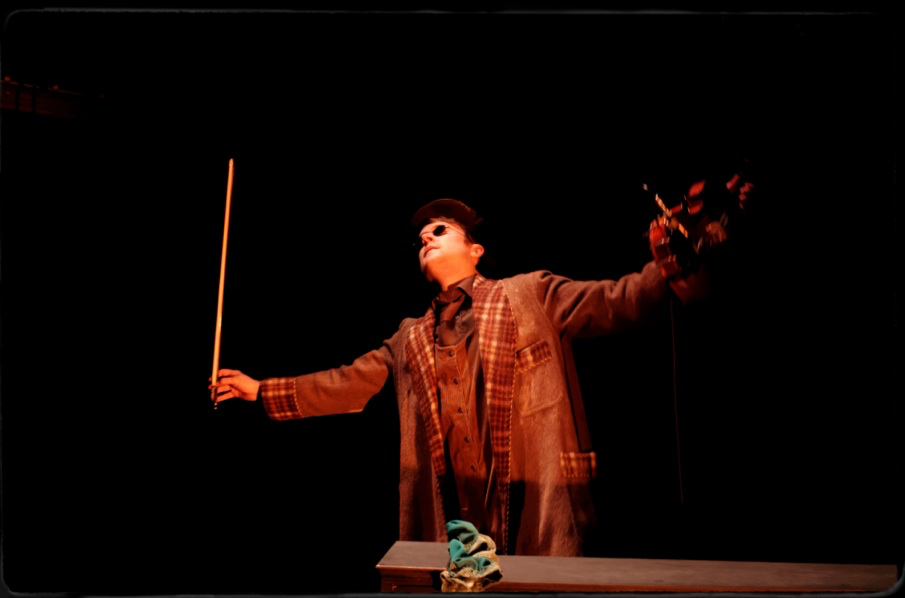 You could say, for example, that the plot was thin and obvious—boy-meets-girl via boy-and-girl-keep-narrowly-missing and boy-and-girl-kiss-against-various-available-surfaces—but on the other hand, a simple core, endlessly repeated, retold and reworked, is just what the recurring arpeggios seem to request. It’s when the music begins to peter out, toward the end, that the show’s lack of clear direction comes more into view. The ending itself feels arbitrary, leaving you wondering what, exactly, you were to take away; it is a sumptuous spectacle, but it ends up feeling more like a showcase or concert than the theatre it seems to want to be.

Another gripe: Judd’s music was one thing, his acting quite another. His blindness was hammy. Fumbling exaggeratedly along the edge of the bed and wearing small darkened glasses, he looked like a caricature. The performance programme draws a comparison between being blind and shutting your eyes: ‘We want to respond to the supernatural, the magical and the emotional sparks that seep into us when the eyes are closed. … Our main character is a blind musician who has never seen the light.’ There was not even the attempt to understand or explore any more nuance than that. Blindness, it shouldn’t need pointing out, is more than a clumsy metaphor: it is an affliction, an identity, a nexus of experiences altogether more complex than a conceit for a performance. But Blind Man’s Song doesn’t want to know.

Blind Man’s Song is at the Hope Theatre, Liverpool, on May 23rd, and afterward at Recklinghausen and Perigneux.