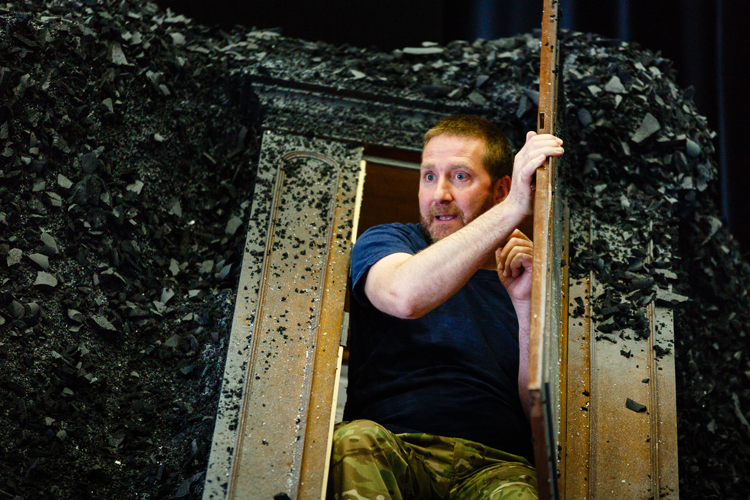 David Birrell in The War Has Not Yet Started

DAVID BIRRELL appears in The War Has Not Yet Started by Mikhail Durnenkov at Theatre Royal Plymouth from 12th – 28th May.

TB: Can you tell us about what you’re working on at the moment?
DB: It’s about contemporary Russia. It’s about his own experiences and it was written in response to the current socio-political climate. It’s an extraordinary piece based around three performers who play a combination of roles. There are surreal and absurdist elements to it. It’s funny – a very dark humour. It’s an amalgamation of twelve short stories woven together into a single thread.


TB: What is your background – how did you get into a career in theatre?
DB: I wasn’t one of those people who announced to their parents when they were 6 that they were going to be an actor. There wasn’t any drama taught at my school. I got into it because of Manchester Youth Theatre, which is sadly no more. That was a bit of a life changer for me. Initially I had no intention of becoming an actor. It sort of crept up on me. I thought I’d give Drama Schools a go and I got lucky – I ended up training at Bristol Old Vic for three very intense years. Most of my work since then has been in theatre which is what I intended. I wanted to be a theatre actor and that’s what’s ended up being the case.

TB: What advice do you have for actors at the start of their careers?
DB: I do think training is important. I don’t think I could have become the actor I wanted to be without the discipline it gave me although I appreciate that that kind of education doesn’t suit everybody. Otherwise, meeting actors and other people who share your interest can only help. Surround yourself with people who share your interest. Join a youth or community theatre group if you can and of course go to the theatre as much as possible. Find out if you really want to do it. You’ve got to be prepared for the idea that you may only ever just about make a living.

Also, if you’ve got another skill that’s fantastic. Sometimes I regret not going to university. A lot of actors are able to make money from tutoring, proof reading, marking and so on. There will be times when you can’t work as an actor so you’ll need other ways of earning money.

TB: What do you think is the greatest challenge about working in the acting profession today?
DB: Just about anybody can be an actor. Anybody who calls themselves an actor is one. You don’t necessarily have to be a member of Equity; you don’t have to have trained. Therefore the pool available to directors is huge. It’s not like that in Ballet or Opera. The biggest challenge is this – what have you got? You’ve got to have something really special to sell yourself in that flooded marketplace. Even your social media profiles are scrutinised now.

TB: If you could change one thing about the acting profession, what would it be?
DB: I’d want the profession to be taken more seriously. There are many countries where theatre is held in much higher esteem than it is in the UK. It’s often dismissed as a bit of entertainment rather than an art form that can really engage with communities. You go into some theatres and the sense of community ownership is really moving. It’s great for a community to have a theatre that they can really be proud of. 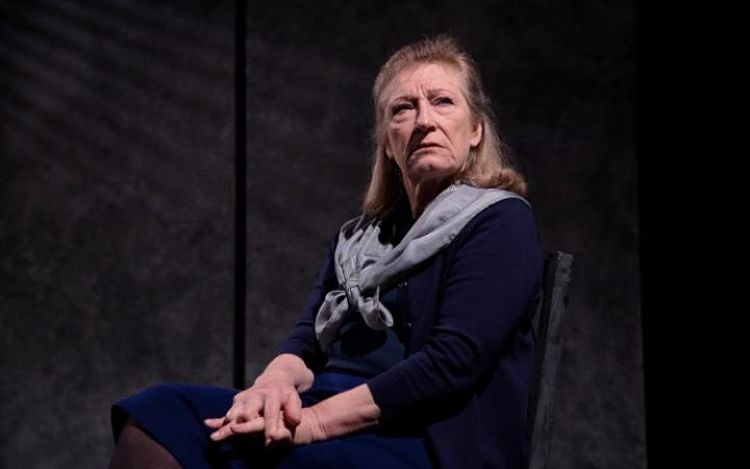 CHARLOTTE CORNWELL is performing in Lovers of Diorne, by Marguerite Duras, at The Theatre Room until 21st May. Lovers of Diorne is being staged by Frontier Theatre Productions, a theatre company set by James Roose-Evans to create “theatre for the Third Age.” It aims to make use of the best of a neglected generation of mature 60-plus actors by providing them with work that is equal to their talent, and to ensure through a rolling programme of workshops that younger actors can learn from the experience of their older colleagues.

TB: Can you tell us about what you’re working on at the moment?
CC: Based on a true story of a gruesome murder that occurred in France in the 1950’s, Duras explores the idea that we are all capable of murder, even the most ‘ordinary’ of us. It’s an intense exploration of motive, murder, and madness. Later this year I’m moving down to the wilds of Exmoor National Park in Devon, a place that has captured my heart over the last few years where I hope to pursue my new found love of writing.

TB: What advice do you have for actors at the start of their careers?
CC: Grow a second skin. Ours is a very tough, difficult and, at times, brutal profession. It’s also incredibly addictive. Make sure you keep up with other aspects of life; always keep reading, anything and everything; be aware of what’s going on in the world beyond theatre  and cultivate an interest in something other than your work.

TB: What do you think is the greatest challenge about working in the acting profession today?
CC: The need to be pro-active – how I hate that phrase, but it’s true. I was incredibly impressed by my students at the University of Southern California in Los Angeles, where I taught for eight years. They create their own work by collaborating with writers and filmmakers, and make use of the internet to promote their work in a way that young actors here haven’t yet really utilised in a meaningful way. They also focus on diversifying their talents – acting, music, stand-up comedy, writing, producing and I think drama schools here need to be much more focused on encouraging their students to expand their capabilities.

TB: If you could change one thing about the acting profession, what would it be?
CC: To have it recognised as a proper job and for actors to be paid a decent living wage for the work we do. £300/£400 for a six day week is a joke, and the majority of our profession are lucky if they earn that when they’re fortunate enough to be working. Everyone in society benefits from actors every day – those who go to see live theatre and those who stay at home and watch TV and movies on their laptops and tablets. How many of us tune into our favourite soaps everyday, both on TV and radio? Acting is the second oldest profession, and those of us brave enough to pursue a living in the most unpredictable of careers in the world, should be at least able to feed our kids and pay the rent. 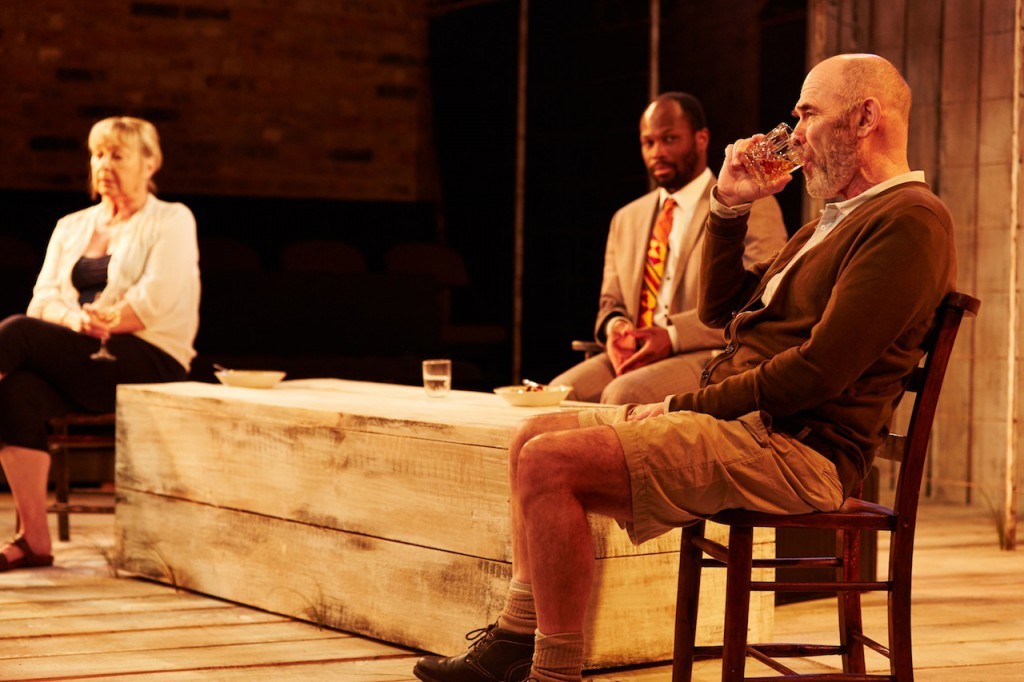 Peter Guinness (Right) in After Independence

PETER GUINNESS is currently performing in After Independence at the Arcola Theatre. Produced by Papatango Theatre Company, the play is written by BBC Scriptroom winner May Sumbwanyambe.

TB: Can you tell us about yourself and what you’re working on at the moment?
PG: It’s set in Zimbabwe and is about identity, land ownership, dispossession and justice in a post-colonial world.

TB: What is your background – how did you get into a career in theatre?
PG: I started out as an art teacher but I got involved in putting on school plays and eventually decided to give up teaching and audition for drama school. I was lucky enough to get a place at the Central School of Speech and Drama (in the days when you could get a grant) and I’ve been an actor ever since.

TB: What advice do you have for actors at the start of their careers?
PG: Don’t ever be late for rehearsals. Be prepared to make a complete dick of yourself in the rehearsal room. And if you’re lucky enough to be a success don’t ever take yourself too seriously.