Reassembled, Slightly Askew, is a ground-breaking audio-immersive theatrical experience by local Playwright, Shannon Sickels (Yee) based on her personal experiences of brain trauma and disability.  It will be showcased at the prestigious Battersea Arts Centre this month as part of A Nation’s Theatre Festival, 11-28 May coinciding with Action for Brain Injury Week on 9-15 May.

Thanks to conversations with Battersea by Reassembled…’s director, Anna Newell, that began over a year ago, it’s the only production from the region that has been invited to be part of the festival which shines a light on shows made by artists based in villages, towns and cities across the UK with wildly different backdrops and personalities.

Reassembled, Slightly Askew, featuring local actors Stephen Beggs and Mary Lindsay (pictured), is inspired by the playwright’s recovery from a rare brain infection acquired in 2008.  During this critically ill phase of her life, Shannon had several lifesaving surgeries, years of rehabilitation and reintegration back into society with a hidden disability.  As part of her recovery Shannon conceived the idea of sharing her story with audiences and doing so in a pioneering way by collaborating with her neurosurgeon, head injury nurse and local artists Anna Newell, Paul Stapleton, Hanna Slättne & Stevie Prickett in sound, drama, and choreography.

The result of this unique partnership is a theatrical experience where audience members are guided into hospital beds by a Nurse, and don an eye mask and headphones to hear the thoughts of the patient, the sounds and voices Shannon heard as she went on her journey toward reassembling her life.  Advanced audio technology at Sonic Arts Research Centre at Queens Univeristy Belfast makes the sound three-dimensional, causing listeners to feel like they are inside Shannon’s head, viscerally experiencing her descent into a coma, brain surgeries, early days in the hospital and re-integration into the world with a hidden disability. 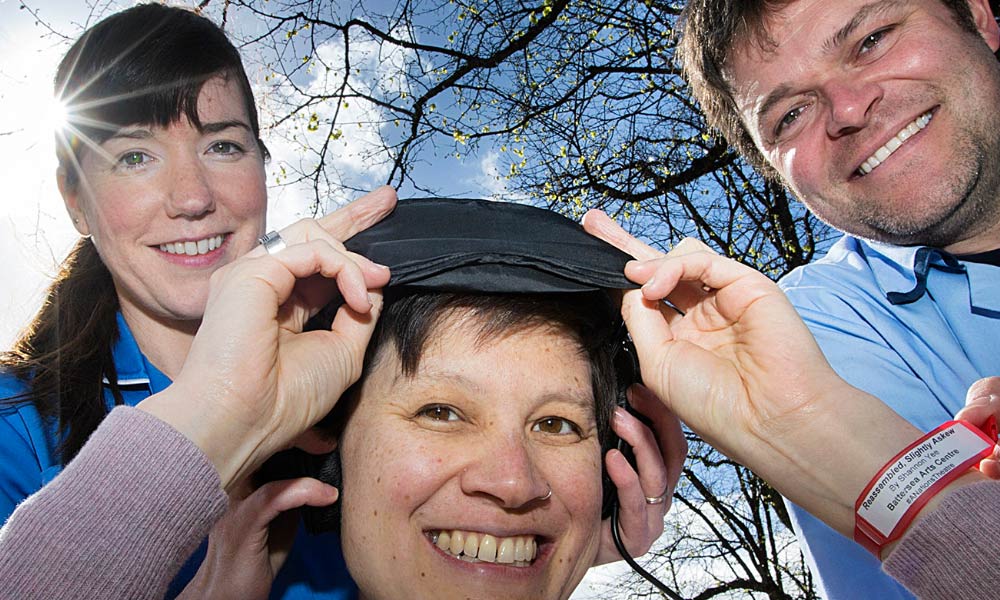 Shannon said, “Little did I think all those years ago when I was laying in the acute Neurosurgery Ward at the Royal Victoria Hospital that I would be creating an artwork that would take audiences into a hospital bed, and my head, to share the challenges and triumphs of my deeply personal story of my acquired brain injury. It is a story of terror, discovery, humour, but above all, hope.”

In December 2015, Shannon was announced by the Arts Council of Northern Ireland as one of 21 local creatives to receive an Artist Career Enhancement Scheme award (ACES), a development award, worth up to £5000, which enables  artists from the region to take their careers to that all important next level.  Shannon’s award is being used to develop a sustainability plan for Reassembled, Slightly Askew, through personalized mentoring from the Arts & Disability Forum with the aim of building networks around the UK and Ireland to showcase the work.

Gilly Campbell, Dance and Drama Officer at the Arts Council of Northern Ireland, commented: “This impressive work from Shannon pushes the boundaries of audience experience, inviting us to step outside the world we know and into the unfamiliar. This is a truly pioneering project from an artist who wants to challenge our perception of disability and conventional notions of drama.”