Review of: A Midsummer Night's Dream

After eleven years at the helm of Shakespeare’s Globe, Dominic Dromgoole stepped down as Artistic Director on 23 April 2016, the 400th anniversary of Shakespeare’s death. With a legacy of outreach programmes and definitive, world-class productions, he left some big shoes to fill, which will be the most interesting element of the few upcoming years.

His replacement, Emma Rice – who made a name for herself with the high-energy Cornish theatre troupe Kneehigh – has taken over as Artistic Director, and she has made her goal of revitalising and ‘playing with’ Shakespeare very clear. Her 2016 summer programme has been dubbed the ‘Wonder’ season and will feature such shows as Macbeth, Cymbeline, and the Kneehigh original 946: The Amazing Story of Adolphus Tips. With this dynamic director focusing on plays with fairytale – even supernatural – elements, it is set to be an exciting year.

The first glimpse of Rice’s leadership was the Globe’s opening production, A Midsummer Night’s Dream. This popular comedy is a perfect vehicle to showcase the new artistic director’s strengths: well known enough to attract Shakespeare buffs and casual theatregoers alike while also allowing for freedom to reinvent the now-iconic performance space. And reinvent it did.

The most notable additions to the Globe itself were the relatively expansive use of sets (notably tables in the audience, giant white baubles hanging from the ceiling, and rigging for characters and set pieces to ‘fly’) and the installation of a modern lighting rig and amplification system. The latter, which was used by microphoned actors and musicians alike, was the most unnecessary. The Globe is an intimate, minimalistic place; amplification is overwhelming and distracting. The new lights will certainly allow directors more choices for future productions, but it too takes away from the space’s unique natural illumination – I attended the evening show, but several lighting effects may have been lost at a sunny matinée. While all three additions were used to fun effect in Midsummer, as will be discussed below, the Globe may have lost its distinctive minimalism. I admit this is a rather purist opinion, but were the show not so fine these alterations may have been unjustifiable. 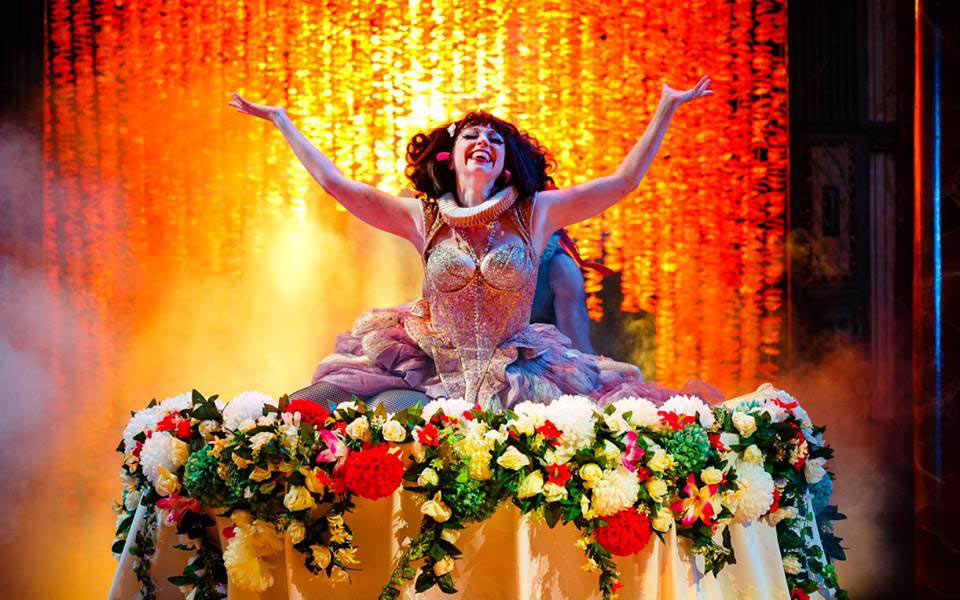 Aside from the questionable changes to the theatre itself, the only negative quality of the production is its length: three hours is entirely too long for such a fast-paced comedy and one of Shakespeare’s shortest. Were a few jokes tightened, songs shortened, and scene changes smoothed, this show would possibly be flawless.

Regardless, Midsummer is terrific – the sold-out night audience riotous laughter matched the bold and bawdy onstage antics. This is perhaps the most important indicator of its success – pure enjoyment. Part of the humour is in the local flavour – the setting is updated to modern London, the Athenian youth Puck is sent to track down becomes a ‘Hoxton hipster’, and the mechanicals are portrayed as the Globe’s stage team. The spectacle and song in the quasi-cabaret faerie world adds a contrast to the central lovers’ and clueless mechanicals’ relatability. Furthermore Rice’s roots in physical theatre support the more supernatural scenes as Puck (Katy Owen) leads the mortals through mischievous escapades.

A major technical advantage, especially in such world-class Shakespeare, is the creative cross-gender casting; all of the ‘rude mechanicals’ except Bottom and Flute become women (though Flute is played by a woman playing a boy), and Demetrius is pursued by ‘Helenus’ (a show-stealing Ankur Bahl) instead of the usual lovelorn lady.

While a bit messier than hoped for a new artistic director’s premiere piece, A Midsummer Night’s Dream revels in a delightful, light-hearted hilarity. Whether its (and this season’s) unorthodox style will help or hinder the Globe’s appeal remains to be seen, but the production itself is a joy to experience and a highly-recommended evening on London’s South Bank.

A Midsummer Night’s Dream plays at Shakespeare’s Globe (21 New Globe Walk, Bankside, London SE1 9DT) until 11 September 2016. Tickets are £5-45 and can be purchased from http://www.shakespearesglobe.com/theatre/whats-on/globe-theatre/a-midsummer-nights-dream-2016