Produced by:
Birds of Paradise and Random Accomplice, with Soho Theatre

An accessible, unmissable play that more than stands on its own two feet

Theatre that confronts the ‘harsh’ realities of the modern, social media obsessed world is everywhere you look at the moment. Dropping buzz words like ‘tinder’ or ‘human data’ into show descriptions seems to be an easy way to appeal to the young professional age bracket, and can turn searching for your next theatre ticket into a form of millenial bingo. In this context, it could be easy to skip over Wendy Hoose, produced by Scottish companies Birds of Paradise and Random Accomplice and currently at the Soho Theatre, but this punchy and sarcastic explosion of comedy is a standout example that deserves to be on everyone’s wish list. 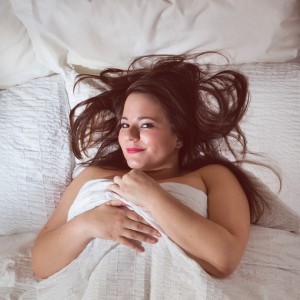 Designer Neil Haynes’ set screams sex from the off; the peeping glimpses from between panelled erotic screens, drawn up to reveal an overwhelming use of red and a prominent bed, within which an almost naked Laura (Amy Conachan) waits for Jake (James Young). They’ve arranged a hook up on Tinder, never having met in person before. But, as Jake would probably quip, he gets a little less than he bargained for. Initially laughs come easily from the awkward scenario of two strangers negotiating the most intimate ritual; getting down and dirty. Trying to be sexy sounds 100% funnier in Scottish slang, but the true secret of Johnny McKnight’s belly laugh dialogue is the on-the-nose timing of cast members Amy and James, who manage to make every line sound fresh and and unrehearsed.

Yet over the course of this hour, increasingly serious strands of conversation are woven into the narrative, without dulling the comedic shine. The first hint that this is no ordinary OK Cupid sketch show is the audio description introduction, from an invisible third character voiced by Julie Brown. Like a cheeky Siri, this ever-present upper-class Scot narrates the action on the stage, making this one of the most inclusive and accessible shows on the Soho’s program, but she also adds her own biting twist by judging the characters on everything from undressing ettiquette to kissing technique.

Productions that promote accessibility of deaf and disabled communities don’t often make things like BSL screens and surtitles more than an add-on (for instance even Graeae’s recent production of The Solid Life of Sugar Water at The National only had surtitles projected in slightly different parts of the set for variety).  Yet, Wendy Hoose makes their BSL, surtitle and audio description a core part of the performance itself, so every person feels like they are accessing the play with the same medium – the ultimate equality of opportunity. With inventively animated and emoticoned surtitles by Jamie Macdonald that read like texts across the top of the stage, the narrative’s exploration of dating apps is reflected straight back at the audience, highlighting the incongruity between messaging a stranger and actually talking to them in real life. These methods of accessibility become a beloved source of comedy in their own right, delightfully turning the traditional idea that good accessibility is invisible on its head.

This is emblematic of the play’s wider exploration of the reality of modern dating with disabilities. Laura refuses to be invisible and, with Jake as her deadpan and ignorant foil, she slays every old fashioned pre-conception we might have about how disabilities might affect your life. As an actress, Amy Conachan brings the audience with her around every unforeseen corner of narrative, whilst James brings nuanced masculine bravado, and develops a real pathos for his abrasive character. I was initially skeptical about a few jokes that seemed to be aimed at disability, rather than people’s reactions and misconceptions to it, but having read the overwhelming critical support of groups such as Disability Arts Online for this performance, perhaps I’m naive in wanting more politeness or niceness – real life isn’t like that, and to pretend as such would round off Wendy Hoose‘s sharp edges.

Often theatre can champion causes at the expense of artistic quality, Wendy Hoose cuts completely against this grain by confronting disability in a narrative that unselfconciously allows itself to be funny. It not only opens up conversations surrounding modern dating, pre conceptions around disability and the awkwardness of meeting up with a stranger for a quick shag. its also at its heart a well executed piece of theatre, that does not need morally good labels to define it.

Wendy Hoose will be continuing it’s run at the Soho Theatre until the 7th May, at 7.30pm Monday to Saturday. Matinees are on Thursdays and Saturdays. You can book your tickets from the Soho Theatre Box Office on 0207 478 0100 or on their website. Age Recommendation 15+