Review of: Twelfth Night at the Hope Theatre

Produced by:
Thick As Thieves

Twelfth Night, written in the early seventeenth century, is perhaps Shakespeare’s most-loved comedy, hence the plethora of London productions scheduled in this Bard-stuffed year. It looks back towards his early comedies with its separated twins and cross-dressing, while also prefiguring later romances like The Winter’s Tale and Pericles with its long-awaited reunions and happy pairing up of lovers. Thick As Thieves’ production, with a cast of just four, plays it purely for the funny. Their Twelfth Night is a breathless showcase of verve and versatility. 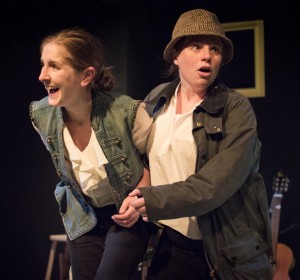 Like a travelling group of players in Jacobean times, the minimal cast eschew all seriousness in favour of an endearing self-awareness and a joyous pursuit of laughs, whether in the text or not. The production’s seams begin to burst when the farcical action reaches a head and there are more characters on stage than cast-members, but the swift, exaggeratedly hasty costume changes are all part of the fun. This is a warm, intimate, novelty Shakespeare experience that all can enjoy.

Nicky Diss, Thomas Judd, Oliver Lavery and Madeleine MacMahon all multi-role impressively. MacMahon, switching from saucy barmaid Maria to a snuffling, grubby Antonio to a frosty, blithely sarcastic Olivia, is particularly proficient. She even manages to squeeze in a healthy dose of character development, her Olivia smoothly defrosting into a love-struck schoolgirl upon the sight of Diss’ disguised Viola.

Lavery shuffles enjoyably between a dreadlocked troubadour of a Feste and an austere yet slimy Malvolio, and Judd does equally well as a despairing – if a little dull – Orsino and a half-witted, upper-class Aguecheek. Diss, as Viola and a bombastic, blustering Belch is a consistently funny presence.

The small cast, swift costume changes and frequent asides emphasise the farcical side of the play, and in all the confusion-fuelled mayhem, some of Shakespeare’s more subtle emotional melodies are lost. There is little pathos to Malvolio’s ill-founded superiority, and his eventual ridicule – partly due to certain speeches having to be shuffled between characters – has no ugly undercurrent of stigmatisation. One never feels as though Belch and Aguecheek have gone too far.

The upside to this constantly cheery vibe is that the audience is very much on the performers’ side throughout. When lines are fluffed and costume changes messed-up, any awkwardness or hostility is easily dispelled by the cast’s charming self-deprecation. ‘We know we are doing something silly’, they all but say, ‘but come along for the ride and we’ll all have a good time’. And, frankly, in the cosy confines of The Hope Theatre’s 50-seat performance space, the mumble of the pub below bubbling up through the floor, pint in hand, it is impossible not to.