Review of: The House of In Between at Theatre Royal Stratford East

The House of In Between, currently playing at the Theatre Royal Stratford East, is visually stunning - but precious little rests beneath this.

The House of In Between, currently playing at the Theatre Royal Stratford East, is nothing short of visually stunning. Designer Diego Pitarch’s use of gauze and screen is marvellously innovative, conjuring up a Patna metropolis before burning it to cinders. The colour composition, going from kaleidoscopic tones right the way through to stark white, transparent sheets was brilliant. The whole two hours of performance became a stunning masterpiece, aided by the lighting designs of James Whiteside – a feast.

The performance deals with the ‘lies, love and life’ of Hijras, an Indian community formed of those who identify as, in the words of writer Sevan K. Greene, ‘post-gender, they are men who are born intersex or elect to be castrated’ and whilst not choosing a gender identity, dress and present themselves as women in public. This is a rich, exciting and nuanced basis for a performance – particularly in a period and society when the ideas and notions of gender are being dismantled and binaries are deconstructed to reveal the fluidity beneath them. Fundamentally, Greene had a perfect opportunity to create something bold, yet, unfortunately, never seemed to clinch these issues.

The difficulties with The House of In Between lie not in the technical execution of the performance, but instead in the conceptual framework and the narrative being constructed. This, to some extent, was infuriating – Greene has used a cultural and social context that should be deeply provocative but ended up being overshadowed by a slightly more contrived familial drama. The story revolves around a clan of Hijras in Patna, attempting to earn a living through both respectable and illicit means, and we dabble with their personal issues before almost the play devolves into a thriller plot line – stakes getting higher and higher with each passing beat.

As the plot thrashed louder the subtext and social commentary evoked by the Hijras was unfortunately drowned out and lost in the knife fights and torture scenes. Greene could have perhaps benefitted from pulling back from these near-cinematic tropes and focused on the characters and ideologies at play within Indian society. Hijra communities exist in a form of paradox – the dismantling of gender stereotypes has, in recent times, been perceived as a fundamentally modern phenomenon when to these groups the idea has been prevalent and vital for thousands of years. The tension between tradition and modernity could have made for a richer, more enthralling story, yet only the briefest glimpses at this idea were given to the audience. 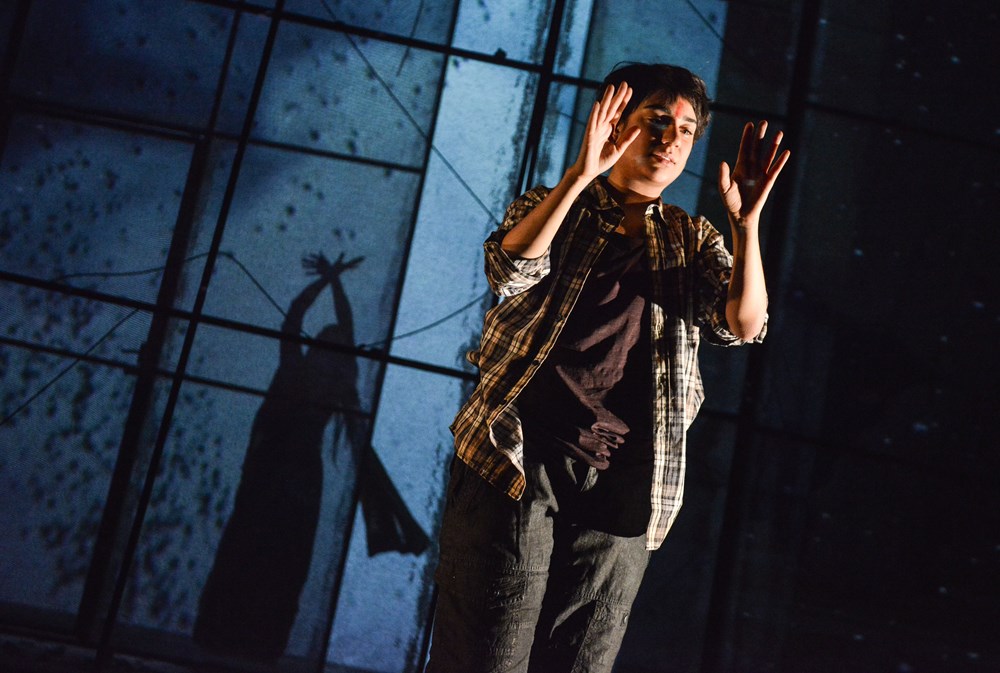 As a result, the script suffered from some pacing issues, not aided by a sound design that, once again, felt all too movie-like – any dabble into emotion, sentiment or tension was reiterated by a crescendo in the score, and as a consequence left the actors unable to construct any such effects for themselves. Some moments would simply have benefited from more silence.

The actors themselves were, for the most part, able to embrace and grasp the complexities and social significance of their characters, imbuing the Hijra culture with a familiarity so intrinsic to making the performance work. Choreography from Seeta Patel was equally magnificent, giving gestures and hand movements symbolic value and allowing a progression of movement to mirror the character arcs. Director Pooja Ghai also works some magic with the blocking within intricate set designs – the climax to Act One being a masterclass in character positioning and the evocation of sentiment.

The House of In Between becomes a difficult show to fully review – the spectacle, design and aesthetics (including superb costume choice) all evolving from a narrative that never truly gets to the bottom of such a rich and exciting culture like that of the Hijras. Given the pertinent subject matter the play manages to never feel vacuous, but there were times that it almost gave way. Greene has found a superb topic for a show, but  needed to eschew a familiar, trope-filled narrative and place the focus instead on the Hijra sect of society where the magic and meaning really lies.