Review of: The Delights of Dogs and the Problems of People at the Courtyard Theatre

The last time I was presented with alcohol onstage, it was during an Edinburgh Fringe performance of The Seer – a whirlwind examination of Arthur Rimbaud’s life and sexuality. The sharing of alcohol created a form of collusion, almost camaraderie. As it turns out, The Delights of Dogs and the Problems of People turned this idea on its head with superb poise and precision – achieving a similar effect of bringing audiences into a story before revealing the murky and morally dubious qualities it contains. 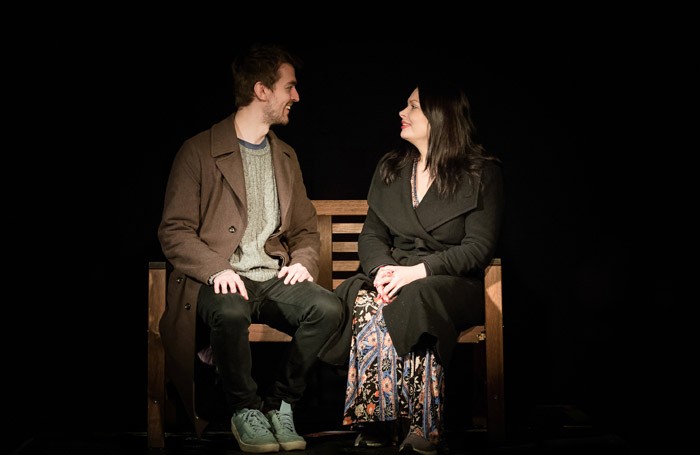 As a premise, Delights of Dogs is a well-worn path – a couple, once blissfully together, slowly fall apart leaving two destructive individuals trying (or, as it turns out here, actively trying not) to put their lives together again. The two hander is entirely reminiscent of a harder, coarser The Last Five Years or even a less eloquent version of Lungs, albeit with a more harrowing ending. The tropes were recognisable – there didn’t seem to be the injection of too many new ideas or anxieties in a destructive relationship context.

The acting itself must be applauded, as this was a marvellous double team performance from Rosalind Blessed (also writer, playing Robin) and Duncan Wilkins as James. Having previously seen Blessed in The Ballad of Robin Hood, here she embellished a previous warmth and joviality with a multi-faceted vulnerability – it was a magnetic performance that kept her engaging for the full two-hour runtime. It was matched by Wilkins, and his smooth, dulcet tones provided a charismatic compliment to Blessed. Their chemistry was palpable – a necessity in justifying the consequences of their break up and the declining years of their marriage.

The problem with Delights of Dogs seemed to spout from the runtime and material – too little content stretched over too long a timespan. Many scenes felt short to a point on unnecessary inclusion, and the show could have perhaps benefitted from cutting back on some of these moments and placing the emphasis on the longer episodes and monologues. It would be fascinating to see the pair even simply put on Lungs – their magnetism and vibrancy being wholly suited to the play.

Perhaps the most touching part of the play is the inclusion of the dogs – the reliable comrades that essentially act as symbols for the pair’s relationship. Director Rupert Holloway has the audacity to even have Wilkins run around at one point as a dog – a not-so-subtle choice that turns out marvellously. There are tinges of autobiographical experience but it is difficult to gauge exactly how much they play into the show – either way this was a fabulous depiction of man’s relationship with his best friend, as well as the consequences of the decline of man’s relationship with their supposed significant other.

The Delights of Dogs and the Problems of People will be playing at the Courtyard Theatre until the 23rd April.