Review of: RUFF at the Barbican Silk Street Theatre

RUFF was an empowering experience to watch and, whilst not having the edge it may have desired, was a tour-de-force from Peggy Shaw.

Split Britches has had a long, fascinating and illustrious existence over the last 30 years. Their involvement in the activist movement has meant their views, once entirely anti-establishment, have now slowly become a vital part of moral and social movements causing constitutional and international change. It’s a strange transformation of position for the group, and leaves their reputation hanging over this performance.

What is so surprising about RUFF therefore is how anti-political it is. This is a personal story – that of Peggy Shaw’s stroke, and the ensuing recovery and acceptance of circumstances. Their tone scathingly laced with humour – a blunt poeticism running through 80 minutes of monologue. It was the performance of a seasoned veteran, honed and crafted over months of preparation. Shaw works through mental and physical examination of their own predicament, evoking childhood memories, stray thoughts, and deeply moving musical interludes. Fundamentally, this was a show Shaw brought from her own intrinsic form, and often there were moments while Shaw spoke her lines (aided, understandably, by a set of screens) that we as the audience felt less immersed in the show and more simply witnesses to their performance. 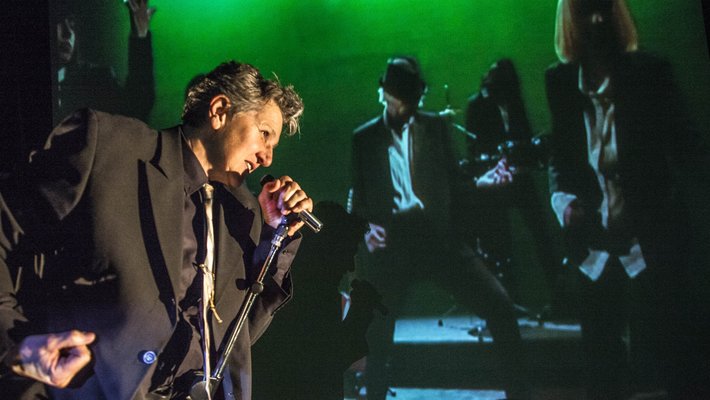 The technical flare and promise suggested by Shaw’s green screen was, unfortunately, slightly more underwhelming that expected given the giant strip of cloth that cut the stage in two – which, given modern cinematic expectations, almost held the promise of visual world bending and adaptation of the stage environment to become something all the more fantastical. As it turned out, the green screen served only as a projection board for Shaw’s ‘live’ band, who provided a refreshingly tongue-in-cheek accompaniment for the events onstage. The musical highlight had to be Shaw’s rendition of the Hokey Cokey (in the style of ACDC), a moment when they seemed to bound around with a hidden stash of energy.

Despite losing its political edge and emerging as a personal story, the lyricism within Shaw’s account of the stroke is remarkable. This was matched by some fantastic one liners fit for the progressive audiences Split Britches always attract – take, for example: ‘when I went into hospital I was a woman mistaken for a man, when I came out I guess I was a straight white guy cuz half my brain was missing’. Other witty lines about being a butch lesbian evoked similar reactions.

The best way to surmise the performance was to say that Shaw has allowed themselves not to be defined by their stroke, but instead defined the stroke as they saw fit. Through various metaphors it became an icicle, her own younger self, or her own sister. It was an empowering experience to watch and, whilst not having the edge or consistent immersion it may have desired, was a tour-de-force from Shaw.

Presented by the Barbican.