In Ones To Watch, we talk to the theatre companies on the brink of something big – the companies you haven’t heard of yet, but you will.

Sharklegs are a theatre company made up of Kezia Cole and Richard Hay, who are currently Associate Artists with The Point Theatre, Eastleigh. They won the Les Enfants Terribles Award this year with their show The Inevitable Heartbreak of Gavin Plimsole, which will premier at the Edinburgh Fringe 2016. Previous winners of the Les Enfants Terribles Award include New Diorama, Human Zoo Theatre Company and Fine Mess Theatre. As well as The Inevitable Heartbreak of Gavin Plimsole, they are working on the family show Long, Broad and Sharpsight for the Hat Fair in Winchester. 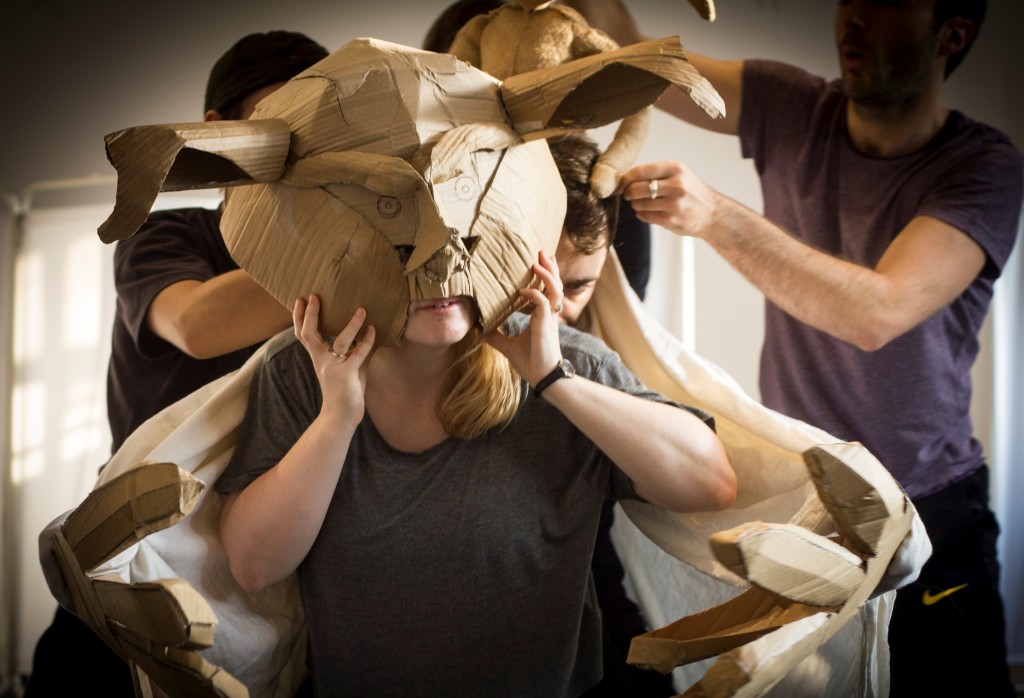 Theatre Bubble: What in your opinion is the biggest challenge facing UK Theatre today? What would you like to change most about the UK Theatre Industry?
Sharklegs: We think there is still a lack of understanding around how contemporary theatre is made and how to create the best environment to support the making of new work. The difficult thing to explain is that devising takes time and it takes failures to produce a great piece of work.
What we have found the most tricky is communicating the nature of the creative process to funders/producers/programmers and all the other wonderful people who are involved in getting a show out there to an audience. Devising often relies on getting in a room with the right people to see what magic happens – what is sometimes hard to communicate is that seeing  a work in progress or a scratch performance does not constitute the final piece. The desire for work to be completed with all the “bells and whistles” can be detrimental to the creative process as it sometimes forces artists to focus on the finished product and not the creative process.
We would love to see a move towards a world where programmers, producers and theatre supporters have the time, space and funding to support contemporary work from conception through to premiere, which would enable artists to take risks, experiment with out the fear of failure and rejection early on in the process.

TB: As a non-London based company, is the UK Theatre Industry still London-centric? What are the advantages and disadvantages of being based in Eastleigh?
SL: Theatre can still be seen as London-centric although it is opening up and people are taking notice of the fantastic regional work which is being created, and we think contemporary theatre has always looked outside of the capital to build audiences and create interesting work – look at Kneehigh, Blast Theory, Forced Entertainment. The Oliviers may need to catch up though!
There are a myriad of spaces and audiences with a wide array of theatrical tastes in London which is amazing, but that leads to a hugely competitive landscape where emerging companies can get lost and we understand why! The costs of mounting work in London also mean that it is incredibly difficult to take risks as a new company or to build an audience for your work so we really enjoy the freedom that being based outside the Capital affords us.
By basing ourselves outside of London we have been able to achieve one of our main goals – to bring high-quality theatre to audiences that do not necessarily have everyday access to it – much more than we ever could in the capital.
As a company, our sights are firmly set on touring our work and to build a robust touring network you have to look at a regional platform.

TB: What’s your advice for emerging theatremakers? Say if you were a graduate, with an idea for a show and potential collaborators – where next?
SL: I think the best advice is to not be afraid of failure. Get the work/idea up on its feet and in front of people (whether that be friends, peers, at a scratch night, whatever). The best way to learn and develop is to get people talking about your ideas. An audience will be able to tell you if your ideas are clear, if the piece has heart, or if you aren’t communicating what you thought you were. As scary as it seems, this is the best, and most terrifying, way of exploring your practice.
Apply for scratch nights and showcases and start talking to venues about their Associate/Emerging Artists support programs – the backing of a theatre is invaluable in terms of support and people to talk to! Most importantly don’t get down-heartened by the ridiculous amounts of admin that need to be done. We get into the arts for the art, but the Admin mountains quickly hide the art in their adminny crevises!

More Information for The Inevitable Heartbreak of Gavin Plimsole

If you had a finite number of heartbeats, how would you make each beat count?Gavin Plimsole feels a flutter in his heart: Is it heartburn? Is it that girl across the room? Or is it a malformation of his heart – a sticky, red time-bomb? Gavin is given a life-changing diagnosis. Hiding in his shed he assesses his entire life; what has he done with those beats? Which has he thrown away? And how many did he lose when she broke his heart?

Sharklegs are raising funds for The Inevitable Heartbreak of Gavin Plimsole here.