In Ones To Watch, we talk to the theatre companies on the brink of something big – the companies you haven’t heard of yet, but you will.

Footprint Theatre was formed by a group of Sheffield University students in order to create less commercial work for intimate audiences, and is currently based in Sheffield with a residency at Theatre Delicatessen North. The company received an award for Creative Collaboration at the National Student Drama Festival in March this year for their show DANIEL, which is based on the real story of an eighteen-year-old boy sentenced for the possession of indecent images and which follows the friends and family left behind in the aftermath.

The Sunday Times described the piece as “disturbingly brilliant”, and DANIEL will be transferring to ZOO Venues Monkey House in August as part of the 2016 Edinburgh Fringe. 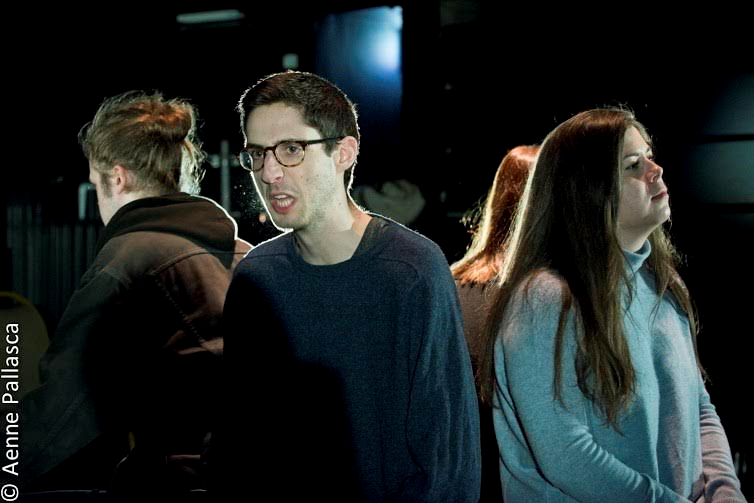 We are dedicated to creating work grounded in truth… to elicit discussion and consideration for perspectives that would otherwise be overlooked. We need audiences to sit up and listen. We expect they will disagree in parts, but that is what we believe makes exciting work – Company Website

Theatre Bubble: What in your opinion is the biggest challenge facing UK Theatre today? What would you like to change most about the UK Theatre Industry?
Company Director, Elin Schofield: More places offering support-in-kind to emerging artists. We are lucky enough to have a residency with Theatre Delicatessen, an organisation who offer support-in-kind to artists, such as free rehearsal space and small cuts of box office takings in return for performance space. Places like Theatre Deli enable artists to make work on a shoestring, but there are so many places that do not operate in this way. A lack of organisations like this exclude artists without a lot of dispensable income, artists who can afford pricey rehearsal space and can pay to cover the costs of producing work themselves are a rare thing.

TB: As a non-London based company, is the UK Theatre Industry still London-centric? What are the advantages and disadvantages of being based in Sheffield?
EB: We love Sheffield. It is relatively cheap to live and it seems to be making leaps and bounds in terms of the art scene in the city. Increasingly places like Sheffield Theatres are opening their doors to emerging companies and artists, with help from Third Angel and Theatre Delicatessen, which is great. However, the UK Theatre Industry is hugely London-centric. The main problem for us, as well as many other young companies, is getting programmers, reviewers and bloggers to see our work. With the current climate as it is, it is not financially viable for someone to come from London to see our 50-minute show, taking a risk on a new company.  Meghan Vaughn recently blogged about this here using our company as an example – and that blog post prompted Lyn Gardner to write this.

We are fortunate enough to have raised enough money to take DANIEL to Edinburgh this year, a national platform where reviewers and bloggers are more likely to see your work, however, if a company is not in a financial position to do so, how can they get noticed in the regions?

TB: What’s your advice for emerging theatremakers? Say if you were a graduate, with an idea for a show and potential collaborators – where next?
I would say, just go for it. Find a room, invite friends and just perform what you have made. E-mail people who you admire or programme similar work and ask them to come along (always worth a try). Also, apply for funding. People often said to us that we weren’t experienced enough to be funded, or large funding bodies don’t support new work, but that isn’t true, so just go for it! If you don’t get it the first time then it is good practice at the very least!

Essentially, it’s the people around you that are the most vital component. Make sure you have a great group of people that have similar ideas about what they want to say, and how they want to say it. Also, you have to spend a lot of time with the people you’re working with (sometimes even sharing a bed for several weeks) so make sure you all get on!

Then there are the secondary but very important things, like budgets, your website and social media. Nowadays something like Twitter can ‘make or break’ you, for example by getting the attention of reviewers or other companies with a well-timed, punchy tweet. Your website doesn’t have to be stunning but it should effectively convey your company ethos, have high-quality images and, most importantly, clear information about your work and how to get in touch with you.