In Ones To Watch, we talk to the theatre companies on the brink of something big – the companies you might not have heard of yet, but you will.

Breach Theatre, formed by three graduates of the University of Warwick, made waves last year with The Beanfield, a multimedia show exploring national heritage and state violence through a staged reconstruction of the Battle of the Beanfield. Described as “Theatrically ambitious and boldly political” by The Guardian, the company was awarded the Total Theatre Award for an Emerging Artist or Company at the 2015 Edinburgh Fringe. The Beanfield was featured at the 2016 National Student Drama Festival, and has been published by Oberon Books. 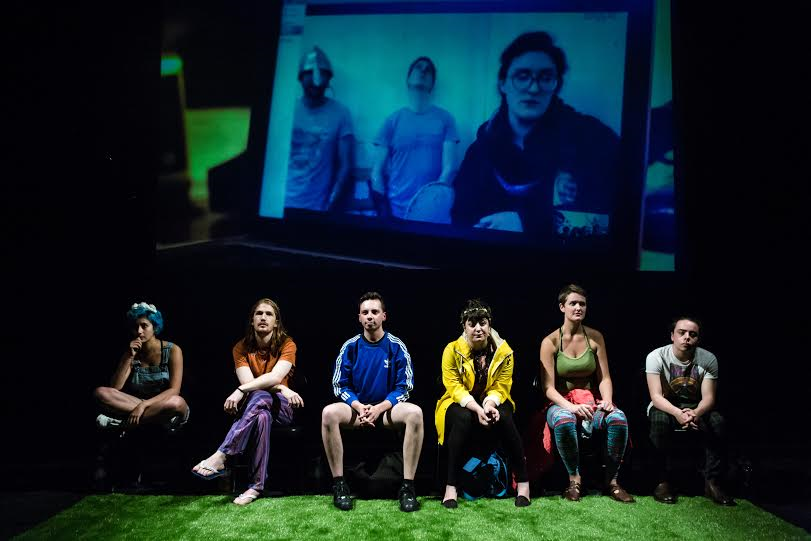 Theatre Bubble: Who are you and what are you up to at the moment?
Billy Barrett: I’m Billy Barrett, a founding member of Breach. We’re a company of two theatre-makers (myself and Ellice Stevens) and a video artist (Dorothy Allen-Pickard). We collaborate with performers to make interdisciplinary work. We’re currently touring our first show The Beanfield and developing our second, Tank. At this very moment though, I’m at my day-job as a receptionist.
TB: What in your opinion is the biggest challenge facing UK Theatre today? What would you like to change most about the UK Theatre Industry?
BB: Lack of funding, and lack of opportunities and representation for artists who are not white and/ or middle-class. One is partly exacerbated by the other, and both have to change.
.

TB: Is the UK Theatre Industry still London-centric? What are the advantages and disadvantages of being based in London?
BB: I think UK theatre is London-centric, to a degree. On the other hand, outside of London living costs are lower, networks tend to be smaller so opportunities easier to come by, and making work in areas of “low engagement” to quote the Arts Council-ese is a point in your favour when it comes to funding applications.

TB: What’s your advice for emerging theatremakers? Say if you were a graduate, with an idea for a show and potential collaborators – where next?
BB: I don’t think I’m in a great position to advise being very much “emerging” myself, but I think the most important thing is to watch as much theatre as you can – that’s half the job. Probably more than half. In terms of “where next?”, I think the work itself always has to come first – there’s no point going through the admin of registering a company, setting up a website, contacting venues and organisations, etc., until you have something to show.

There are occasionally opportunities to support work in development – Tank started out on a Developing Ideas Residency at the Lyric Hammersmith, although that was Ideastap-funded so it may have stopped now – but realistically I think graduates will make their first show for free, then try to get it seen and programmed.

TB: When you say you are developing Tank, what does that involve and how does this development period differ from that of The Beanfield?
BB: The process of creating Tank has been quite different – as although it’s again based on a historical event, the show we’re creating is within a fictional “world” rather than it being self-referential, if that makes sense. We’re working with an entirely different cast who are all devising and contributing material as well, so it’s collaborative again.
.
The Beanfield is currently on tour. Tour dates include:
Battersea Arts Centre, London 4th-21st April 2016
Birmingham Repertory Theatre: 26th -27th April 2016
Wardrobe Theatre, Bristol: 28th-30th April 2016
The Bike Shed Theatre, Exeter: 3rd-7th May 2016
Follow Breach Theatre on Twitter at @breach_theatre