Review of: My Father Odysseus at the Unicorn Theatre

Produced by:
A Unicorn Production

Timberlake Wertenbaker’s My Father Odysseus is the second in the Unicorn Theatre’s series of classic plays, exploring alternative interpretations and ideas in these myths and stories

Timberlake Wertenbaker’s My Father Odysseus is the second in the Unicorn Theatre’s series of classic plays, exploring alternative interpretations and ideas in these myths and stories. It is a bold and exciting concept for a season, one that was entirely successful in Minotaur. My Father Odysseus shares a few key similarities with its predecessor – both plays exploring strained familial and patriarchal relationships alongside the nature of storytelling and how the past can often be reinterpreted and rewritten.

Whilst Minotaur, with its strong central theme and characterization managed to maintain focus and grip throughout (particularly important for a show aimed at teens and youngsters), Odysseus meandered to a much greater degree. The play hopped between the characters of Telemachus and Odysseus – one trying to find his father and the other trying to find memories of his former life. It is a loose arch, and the narrative takes a while to get moving – something that is far more of a problem given the pre-teen audience. The final third, with the blissful and bloody family reunion, saw the play finally hit its gore-filled stride, allowing Homer’s story to explode with vibrancy and humour. This episode also allowed Jefferey Kissoon, in a Prospero-esque role, to really have a bit of fun with his morose and haunted Odysseus. 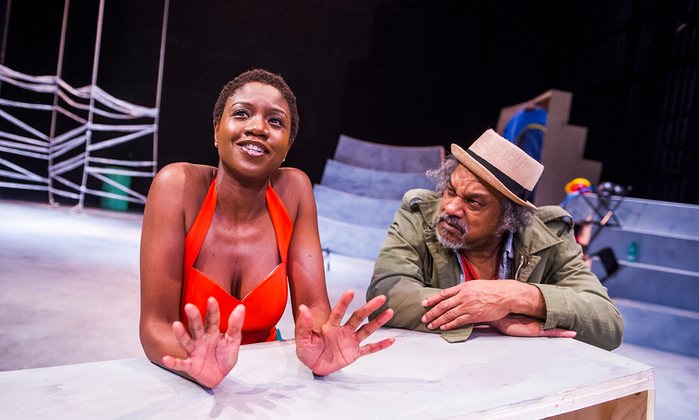 For the most part however, it felt as though Wertenbaker was simply unsure of how to frame the parallel stories in a concise and meaningful way. The two leads are eventually brought together in a modern café, sitting at adjacent tables, after relatively little build up or occasion. After 40 minutes of exposition and hints of development, this was something of an anti-climax. Theo Solomon, given so much to chew on and bring to Theseus in Minotaur, feels far more constrained here; unable to truly unravel Telemachus’s emotional journey. For a play exploring the supplementary characters of The Odyssey, the play spent a long time simply re-telling Homer’s classic.

The aesthetic choice was a fantastic one – taking a piece from the recent Jeramee, Hartlebee and Oooglemore‘s book with its use of bold, matte, primary and secondary colours. The modern context worked well – giving the show a sense of familiarity, emphasised by the passing references to the Middle East and refugees – a fantastic touch that Wertenbaker could have explored with more detail.

Ginny Holder’s Penelope is woefully underused, only giving us a glimpse into her experiences and for the most part left to weave a pattern at the back of the stage. Given Penelope’s strength of will in fending off the hordes of suitors, her confinement felt on the whole unfair. The same is true of Charlotte De Bruyne’s Athena – bursting onto the stage with energy and magnetism, yet rarely given the opportunity to do so. Greater emphasis on either female character would have been entirely welcomed.

At the Unicorn theatre, London, until 10 April.