Review of: Les Blancs at the National Theatre

Les Blancs was once, and remains, an essay on the pivotal and intrinsic dangers of imperialist rule, of political stigma and violence.

Lorraine Hansberry’s Les Blancs first opened on Broadway 46 years ago – challenging post-imperial perceptions of race and society in Africa. The remnants of the play’s American heritage are still prevalent (the inclusion of a white, US-born, photographer for example) but as the show opens at the National, it assumes a new form of symbolic prowess, one that has perhaps matured with time.

No doubt this is a powerful performance, but one that had a rather blunted impact when it opened in 1970 compared with Hansberry’s most famous work A Raisin in the Sun. Whilst to some it was ‘a harrowing revelation of what we have brought each other to’, to others it was imbued with ‘pervading dullness and didacticism’. In the present day it is hard to see where this sentiment stems from, but over the last half century Les Blancs has undergone a significant transformation – one that must be examined.

In its original form Les Blancs was less based on didacticism than on reaction – particularly in response to Jean Genet’s 1958 Les Negres. Les Negres, performed Off Broadway through the late 1950s and early 60s, depicts a troupe of black actors creating the trial and murder of a white woman – actors white up to depict the establishment figures throughout. For Genet it was a piece attempting to provide a form of racial commentary, yet Hansberry (and many critics) thought very differently.

As noted in Graham Dunstan Martin’s fantastic article examining racism in the play,  Genet equated the perception of black communities with a form of persecution against moral reprehensibility. For the French writer, morality becomes an absolutist concept that transcends the racial structures that it should be defined by, and in the process, diminishes the racial power structures of society. As Dunstan Martin puts it, ‘there is no attempt on Genet’s part to enlist our sympathies’, and black communities are simply equated with the ‘underclass’ that appears through Genet’s texts – be they ‘maids, victims, criminals’. It was a dangerously reductive and fundamentally wrong depictions. It was, to Hansberry, vital that these issues be corrected. Her performance is a response, a correction. 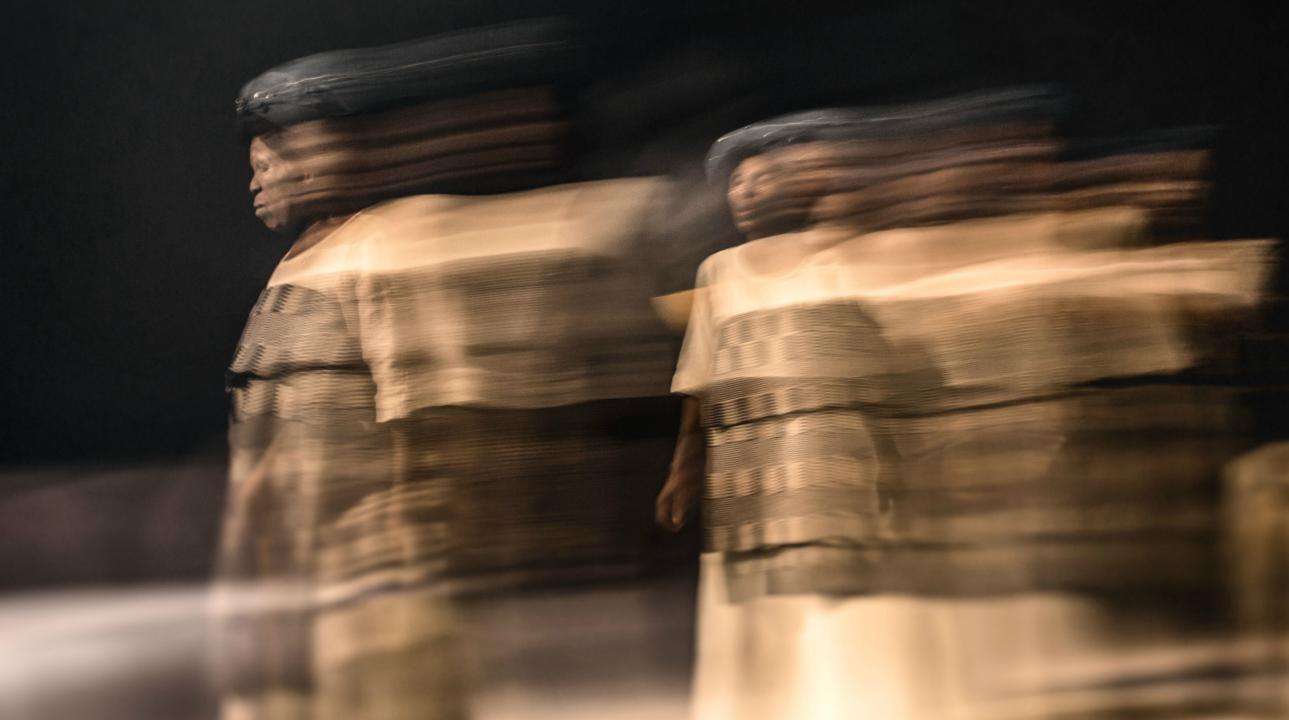 To 2016, therefore. We have lost a lot of this 1950s based context, now faced with a very different yet familiar set of circumstances regarding racial prejudice in our own period.

The Olivier theatre, an empty waste dominated by a skeletal ghost of a house, a hospital, fixed to a mission in the heart of the country. There, a photographer, Morris, arrives – our way ‘in’ to the show through his un-educated, unsuspecting and notably, white, eyes. As a premise it is a telling one, but Morris is nothing more than a tool for Hansberry to create a form of legitimacy for this ‘fictional’ African nation – though the nation is only fictional enough to show just how real and applicable its circumstances are.

The story that unfolds is one of power, a country attempting to legitimise its own existence when every avenue has denied it legitimacy. This is a story of race – of race oppressed and denied. At the same time, it is a story of patriarchal structure and maternal affection, intertwining familial and political with ease. This is most aptly found in Sheila Atim as evocatively anonymous ‘The Woman’ – a haggard, silent, near spectral form that glides across the stage – a symbol or a shadow, it is hard to say. Yael Farber’s direction and patience here is astounding.

Treading the fine line between the familial and wider circumstances are difficult, and sometimes clarity of plot is sacrificed for the necessity of evoking the wider tenor and sentiments of the text. The onus on joining the two together falls to Danny Sapani’s Tchembe, a man settled in England yet returning for his father’s funeral. This English context is another interesting case of the show and its evolving pertinence – Tchembe’s notions of his new, European family, sat around watching television, are much the same as our own. We can empathise with one aspect of this man’s life, whilst being complicit in the subjugation of other parts of it. The duality was entirely innovative.

Les Blancs was once, and remains, an essay on the pivotal and intrinsic dangers of imperialist rule, of political stigma and violence.Yet it is also a treatise on revolution, powerfully conjuring up an emancipator movement within the show and slowly burning away at the rule of the whites. It may have transformed from its earlier reaction to Genet, but the context of the late 1950s is all too relevant in the modern-day. It is not, and should not, be easy viewing, leaving audiences (with their own lives, based on power structures responsible for the same subjugation addressed in the play) a lot to chew on.

Les Blancs will be playing until the 3rd June at the Olivier Theatre. More information here.