Jack Rooke treads the line between hilarious and heart wrenching with finesse in this stand-up/monologue hybrid.

Jack Rooke: Good Grief treads the line between hilarious and heart wrenching with more dexterity than perhaps any other performance I’ve seen. Jack (and I’m using his first name here because, after tonight, I feel like we’re friends) spends an hour talking to us about the loss of his father, the difficulties he faced growing up and the way he and his family dealt with their grieving. And it’s hilarious, start to finish. 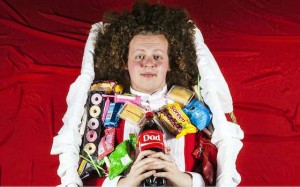 Good Grief felt like a hybrid between stand-up comedy and monologue. The purpose of stand-up is to make the audience laugh and though Good Grief did make the audience laugh, I didn’t feel as though that it its purpose. It was a discussion, of sorts. We were there to talk to Jack about dealing with grief, and he made us laugh while we were doing it. He made us cry, too. I heard the distinct sounds of sniffing and the occasional weep from those around me towards the end, but he made us laugh before, after and occasionally during even those desperately sad moments. And here’s where the show really stood out: Jack brought me almost to tears, then immediately made me burst out laughing, and felt me feeling neither awkward nor guilty about either. He made it okay to laugh about loss, about his loss, and in doing so, he crafted something ridiculous and beautiful at the same time.

The show’s greatest strength lies in its personality. Never once did I feel like Jack was preaching or telling me how I should deal with my grief. He was telling his story, talking about intensely personal subjects and allowing me to laugh at them. He didn’t have the practised and detached demeanour of a twenty-year experienced comedian or the forced emotion of a mid-rate actor, he just told us his story, letting us make of it what we would.

The hour-long one-man show is a risky format, and I’ve seen it fall flat more than once, but Jack knows how to use what he’s got. For one, it wasn’t exactly a one-man show. He used footage of an interview with his nan, and a recording of a conversation with his mother, to bring some variation to the performance. He switched between modes – sitting under a spotlight like a monologue, moving around the stage like a comedian, speaking into a free-standing mic  – and he surprised us with food which he had passed around the auditorium. He kept his hour fresh by avoiding monotony without diverting from his subject matter or resorting to tricks for hollow laughs.

I don’t think that any show is entirely without criticism, and this is no exception. The cut-away videos worked but sometimes I felt that the changes in delivery mode were arbitrary, thrown in just to break the show up. At the beginning, I was given a piece of comfort food, a sweet, and told to put it in a coffin on stage as I walked past. It felt just a tad gimmicky, the show didn’t need it. But honestly, these criticisms are trivial and did not detract from the experience. It’s not stand-up, and it wouldn’t survive if it tried to be because the humour alone isn’t strong enough to carry it for an hour. But it’s not meant to be stand up. I’m not exactly sure what it is meant to be, but what ever it is he’s going for, Jack nails it.