Review of: Iphigenia In Splott

A confrontational re-imagining of the Grecian tale of sacrifice, Owen's "Iphegenia in Splott" is utterly astounding.

Looks can be deceiving. As is rather adroitly communicated in the very title of this brawling explosion of anger – a mythical Grecian reference in a run-down area of South Cardiff – this play forces the audience to function on two levels; one, the expectations that are associated with certain labels (‘Iphigenia’, ‘slut’) and, two, the truth that functions beneath these expectations. From the moment of reading the play’s title to the last few minutes of Effie onstage, the audience are left wondering as to how this ancient story fits in with the tale we are being confronted with in the theatre. And when it finally hits, it is utterly heart-breaking. 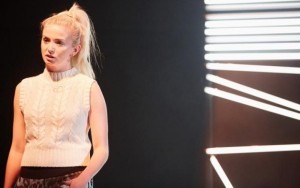 Oddly, it is the very first moments of the show rather than the very last that really grabbed my attention. The lights dim somewhat, Effie stomps onstage and slouches in a chair towards the very back of the stage; hoodie up, legs sprawling, arms crossed. In those few first seconds, the expectations radiating from the audience are almost palpable – we’ve all read the reviews, seen the stars, everybody is aware they are about to see a piece of ‘good theatre’. There is an element of the performing monkey around the way we stare at Effie, whose job it is, after all, to ‘entertain’ us. And it is this atmosphere that Gary Owen so fully exploits – Effie’s starting line of ‘What’re you lookin at’ fits so perfectly into both the world of the show and the world of the auditorium in which we are placed. There is an intense awareness both of what we as audience are expecting of Sophie Melville as well as the character Effie herself, and it is this awareness that draws us in so utterly from the very first line.

It is rather difficult to compose a review about a show most critics have been raving about since 2015, as there is very little extra I can add to the streams of praise already written. Sophie Melville was absolutely extraordinary, treading the fine line between blustering confrontation and deep vulnerability with exquisite poise and skill; Rachel O’Riordan’s simple direction was inspired, not over-loading the play or the character but leaving the words and Melville to sing for themselves. Hayley Grindle’s fluorescent-tube-window-blind design is, again, brilliant in its simplicity and utterly perfect for the atmosphere this piece is trying to create. This is a play where each and every section of the production has been created with an eye on the play and on the message of the play; there are no frills, no personal indulgences on the part of the production team. Every single choice that was made felt like it was made for the good of the text and for the good of what Owen was trying to communicate, producing a staggeringly cohesive and moving portrait of a woman who has lost everything.

At the very end, when leaving the theatre, the audience were oddly hushed – attempting to digest what they’d just seen. For there is still a slight ambiguity at the very end where exactly Iphigenia fits in. In the Grecian myth, she is sacrificed by her father for the good of the war and the morals of the soldiers; read in this way (unlike what the couple in front of me thought) Effie isn’t actually Iphigenia at all. She takes the role of the father, Agamemnon; Iphigenia herself becomes the tiny baby that died in the ambulance on a mountainside during the snow storm. The play is named after a tiny life that exists for around 10 seconds and then flickers out again; made remarkable not by the way she lived, but by the way she died. It is this futility which characterizes the piece, named after a lack of a person, an absence, rather than a character in itself. In a modern world which is so characterized by these absences – of money, of jobs, of social housing, of healthcare – Owen reminds us that it is only the people left behind that have the power to address them.

‘Iphigenia in Splott’ is touring around the UK until mid-April, more information about show dates and tickets can be found here – http://www.shermancymru.co.uk/performance/theatre/iphigenia-in-splott-tour/