Review of: In the Bar of a Tokyo Hotel - Charing Cross Theatre

Though possessing a gorgeous aesthetic and showcasing excellent talent in the form of leading lady Linda Marlowe, 'In the Bar of a Tokyo Hotel' at the Charing Cross Theatre does not quite manage to sustain its sense of allure.

If most theatre aficionados were asked to list their favourite Tennessee Williams works, A Streetcar Named Desire, The Glass Menagerie and Cat on a Hot Tin Roof would probably be the first plays to be mentioned. In the Bar of a Tokyo Hotel, on the other hand, might not be a Williams’ play that many have read, seen or studied. Set in the eponymous hotel, Miriam (played by Linda Marlowe) attempts to find solace in the arms of the Barman (played by Andrew Koji), as her alcoholic husband paints his way to a nervous breakdown. The latest production of In the Bar of a Tokyo Hotel staged at Charing Cross Theatre is a visually stylish piece with some interesting moments, but unfortunately fails to captivate its audience as fully as would be expected for a work from one of America’s greatest playwrights.

The set, designed by Nicolai Hart-Hansen, was a gorgeous display of opulence and grandiose scale; with glistening, low hanging lights and rich colours, the stage served as the perfect backdrop for the appearance of Miriam, an American high society socialite, whose fashionable appearance failed to mask the growing sense of dread over her current circumstances. 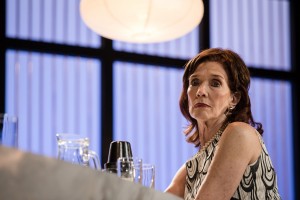 Sat on a small table by herself to the far side of stage right, Miriam simultaneously seemed to fill the room with her brash bravado, and shrink among the decorative flowers and plush carpet. Marlowe’s delicate interplay between these two contrasting states of being was excellent, and when left to contemplate through a series of direct address monologues, entertained and intrigued her audience. Miriam is not a character that asks to be liked, but does demand to be heard, and Marlowe managed to convey this with assurance and grace. It was when Marlowe’s Miriam began to interact with other characters, however, that In the Bar of a Tokyo Hotel began to lose its shine.

From the outset it was clear that Tennessee Williams’ 1969 play is a challenging piece, not necessarily in terms of dramatic content, but due to Williams’ syntactical and grammatical manipulation of text. Every interaction was littered with hesitations, interruptions, and a veritable barrage of steam of consciousness dialogue. The modern day playwriting equivalent that first springs to mind is Dennis Kelly, whose repetitious phrasing and constant attention to the inadequacies of speech perfectly conveys the reality of human interaction. Tennessee Williams’ use of realistic dialogue in this regard lent a certain gravitas to the play’s more emotional moments; when Miriam’s husband Mark, played by David Whitworth, began to lose himself to confusion and hysteria, for example, he reacted as any one of us would – with flurried words, lost sentences, and a lack of general cohesion. This certain brand of 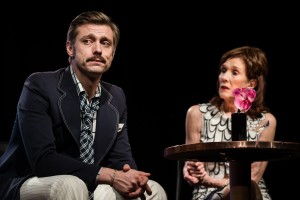 dialogue can be incredibly difficult to perform in a realistic manner, and unfortunately for the cast of In the Bar of a Tokyo Hotel, this difficulty overwhelmed them. This was particularly evident through Williams’ constant inclusion of interruptions; with almost every sentence that was left unfinished, there was a pregnant pause, as if each actor was leaving a clearly marked signal for their scene partner to continue the dialogue. During the play’s various heated altercations, you would expect a sense of fluidity in terms of rapid exchanges, with actors overlapping their speech as would be evident in real arguments. Without this, emotive scenes lacked pace and passion which was such a shame, as it seems that this problem could have easily been solved with a few more rehearsals.

Alas, there were quite a few problems that may have been solved with more rehearsal time. Having seen members of the cast in other projects, I know that Director Robert Chevara had a talented group of actors at his disposal, and so I am disinclined to believe that the problem solely rests on their shoulders. But there were often moments where the production appeared under-rehearsed; this problem was felt in its greatest regard during scenes between Miriam and Mark. Their discussion of her amorous escapades, his incessant smothering and his psychological disturbances naturally resulted in varied insults, escalating until Mark hurls the c-word in her direction. The moment was jarring, hideous and dripping with dramatic possibilities, that is, if the moment had been given an appropriate sense of emotional development. However, Marlowe and Whitworth seemed to perform each line of their interaction in the same tone and volume, and so the climactic line did not seem to possess any additional weight – there was no build-up or sense of heightened stakes, and it was as if the egregious word were merely a throw-away comment. 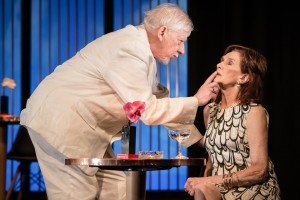 Contrary to this previous argument, however, there were also scenes where the actors seemed to have over-rehearsed, although this only impacted the physical aspects of the production, such as Mark’s multiple drunken falls and a scene which resulted in him throwing Miriam to the floor. Stage choreography such as this needs to be rehearsed extensively, yes, but in order to convince the audience that every trip, stumble and shove is genuine and could cause physical damage. In this production, when an actor fell to the ground it was far too measured, calculated and careful, and instead of feeling concerned for the safety of the characters, it merely left a certain sense of awkwardness.

It must be emphatically stated that In the Bar of a Tokyo Hotel is certainly a difficult text, and in terms of character development, perhaps not one of Williams’ best works. Although this production from the Charing Cross Theatre did possess points of intrigue, passion and entertainment, unfortunately the piece seemed to lose itself among a series of performative hedges and a general lack of dramatic flow.

In the Bar of a Tokyo Hotel will be continuing its run at the Charing Cross Theatre until May 14th, with 7.30pm performances every Tuesday – Saturday, 2.30pm matinees every Wednesday, and 3.00pm matinees every Saturday. You can book your tickets from 08444 930 650 or http://www.ticketmaster.co.uk/In-the-Bar-of-a-Tokyo-tickets/artist/2209966?dcc=&tm_link=edp_Artist_Name.