Review of: HMS Pinafore at the Hackney Empire

Regan De Wynter Williams has enliven Gilbert and Sullivan with something fantastic - catch HMS Pinafore before it sales away!

Gilbert and Sullivan are having something of a brand identity crisis at the moment. The likes of Pirates of Penzance and HMS Pinafore are perhaps being overshadowed by the big, punchy musicals with mass effects and rousing scores – on-the-nose pertinence swaddled by the passage of time and theatrical innovation.

As such, the fantastic efforts of Regan De Wynter Williams to here enliven and enrich G&S cannot be underestimated. Here an all-male cast, transplanted from a nineteenth century and into the Second World War context, provided a rich and entirely enthralling recalibration of HMS Pinafore, a constantly moving tour-de-force from a cast with a vocal capacity that seemed almost superhuman.

The richness in a G&S operetta invariably comes from the pleasant, intricate harmonies – something that could have been entirely undermined with an all-male ensemble. As such, the extra burden was placed on those taking on the alto and soprano parts – having here to maintain an oral depth and cohesion. This was pulled off with aplomb – indeed the cast were all of a supremely talented calibre. Special mention must go to Ben Irish as Josephine – providing some wonderfully powerful moments that never felt too shrill (often a problem for falsetto singing) and were emotionally wrought. Tom Senior matched Irish measure for measure -his high tenor creating some difficult yet subtly perfected harmonies. 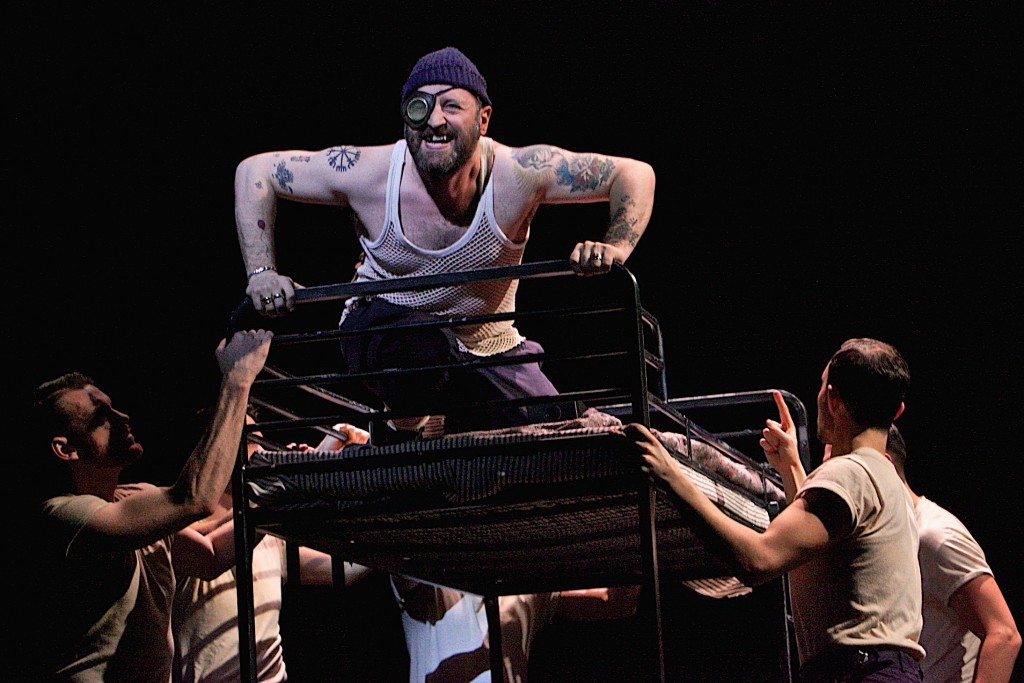 This was a muscular, physical performance – none of the standing around the operetta can sometimes fall prey to. Choreographer Lizzi Gee has taken the ideas of director Sasha Regan and run with them – in the process forcing the cast to run too. It was a magnificent display, showcasing some hilarious and poised sequences throughout. To be able to execute some of these moves whilst singing so crisply was indeed a superb affair. The set from Ryan Dawson-Laight, with three bunkbeds on wheels and minimalist on-stage lighting, was fantastically effective, making sure the play constantly operated on layers and never felt flat.

The premise of HMS Pinafore is well known – a crewmember on a war vessel falls in love with the captain’s daughter  – Josephine, who is at the time in line to marry Sir Joseph, the lord in charge of the admiralty. The class commentary is laced and ludicrous – the only misgiving being in this case that Sir Joseph felt slightly too much of a joke character – his pomp and diminished height meaning his position of superiority never felt in any way justified. Whilst this was perhaps the intention of the show, it did mean that the stakes never felt in any way high throughout the performance.

This was a classic re-told, a magnificent spectacle worthy of attendance. The plot certainly takes second billing to the cast’s quality and abilities, but this is no overt shortcoming – this play is far more about what happens on the journey as opposed to wherever you’re getting to.