Antic Disposition are ready to embark on their cathedral tour with Henry V, and anyone fortunate enough to see the show will leave thinking not only of the former monarch, but also of the tragedies of the First World War. A harrowing yet powerful piece.

Antic Disposition do not make the lot of the reviewer easy. Their version of Henry V, (a resounding success, it has to be said from the start), couched in the context of being put on by a group of French and English soldiers at a medical outpost during the First World War, means that the decisions and portrayals of every actor is two layers deep – every performance is almost a meta performance. This leads to a quandary – when the critic critiques the actor, or the hefty cuts to the script, are they critiquing the actor on stage and director in the present day, or are they instead dissecting the performance of the soldier in 1915 that is acting the Shakespearean part on a 1915 stage. Every choice in terms of movement or dialogue can be framed in this sense – the play’s choices can become justified by the context in which they are placed.

The use of the First World War is not simply a framing device or theme, as would have been a lazier, more straightforward choice, but here deployed with a fantastic depth and impact. Perhaps the most explicit example of this comes during Bardolph’s ‘execution’ scene – one of the most ambiguous scenes in the play’s history. Rather than done offstage, the convicted soldier is brought onstage, gun held to his head by his own King and former friend. He is held there for the entire ensuing scene featuring Montjoy, shivering on his knees, phlegm dribbling from his mouth in a fantastic turn from actor (acting as the soldier playing Bardolph!) James Murfitt. The Shakespearean purist in me balked at the idea – Henry, Hal, would never have actively pulled the trigger, would he? But then with a whirling clarity James Murfitt’s character broke, the soldier portraying Bardolph being seized by anxiety and terror as he faces the fictional gun staring down at him. The fears of the Western Front brought back with a crunching realism in a huge directorial and conceptual feat. 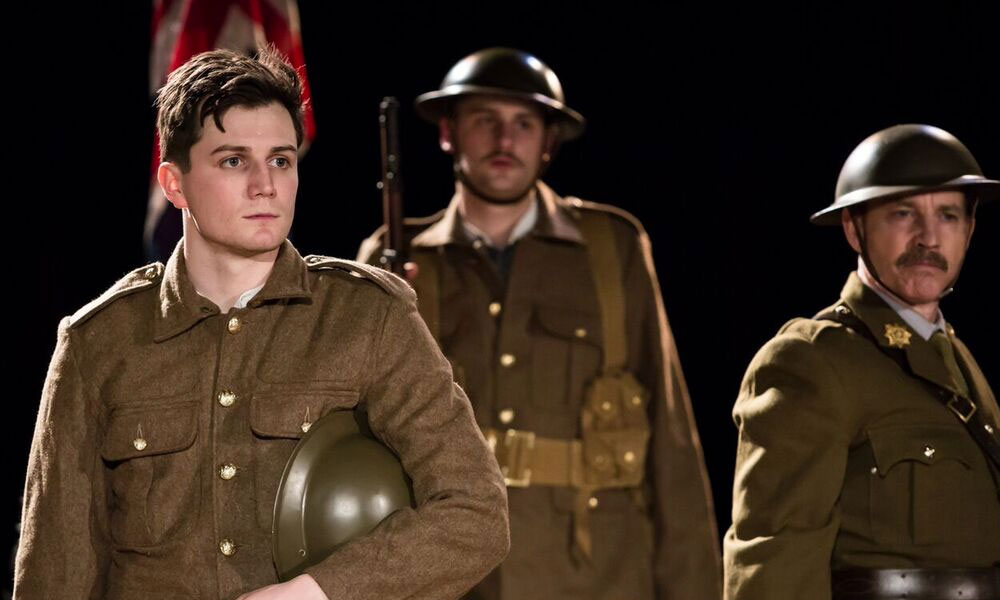 Antic Disposition layered Henry V onto a historical context and used the duality to ramp the qualities of both – the parallels between the expedition onto French soil in 1415 and 1914 being relatively easy to tease out. James Lavender’s Pistol for instance is turned into a bumbling soldier, evocative perhaps of a more slapstick Arthur Lowe. There was a humanity here – none of Pistol’s group were wholly comedic characters, each being instead very realistic, right the way down to Mistress Quickly tidying up the Boy’s jacket before he departed overseas.

It would be unwise to review any performance of Henry V without mentioning its titular role, one inhabited by Freddie Stewart with a remarkable innovation. In fact, for much of the first half Henry seemed staunchly inert, carrying off a stoically regnal and almost melancholic bearing that bore no relation to a jovial Hal that had presumably come before. Stewart’s Henry was almost anti-social, going so far as to lash out at Williams whilst disguised as a common soldier on the eve of Agincourt. There was no bumbling joviality that was so present in Jamie Parker’s version of the role, nor the suppressed magnanimity of Tom Hiddleston. But what became more and more obvious as the play went on was that, fundamentally, Stewart’s Henry was as layered as the play – here was a young soldier, on the Western Front, forced to assume the mantle of one of England’s greatest war Kings. The psychological burden could be felt across the expansive stage space, and the slow degradation of character was perfectly controlled. St. Crispin’s Day speech felt almost as if delivered to reassure the ‘King’  rather than any of his officers. 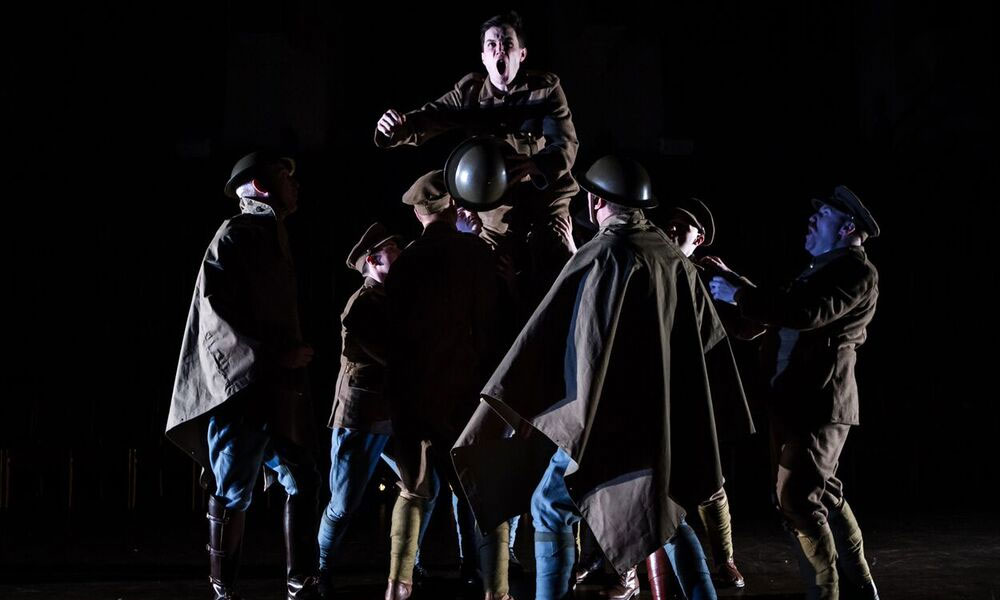 This was a superb reinterpretation of a Shakespeare – one that fit the Middle Temple Hall perfectly. Spectres of Civil War armour seemed to float around the walls, and the weight of English history, be it from 1415, 1599 or 1915 all seemed to be housed within the cavernous space. The lighting and sound reflected this, the booms and flashes of distant shells conjuring up the distant trenches of France. Costume was equally effective – crowns from torn up tin cans, tennis balls from rolls of bandage. Ironic, given that bandages are something that normally heals wounds rather than inciting national violence as occurs in the play.

The issue with the performance lay in the way in which the text was deconstructed and parts were left on the cutting room floor. Some of these were obvious choices – there was no need, for example, to go into the traitors of Southhampton, nor reintegrate the misogynistic sexual japes of the Duke of Burgundy that always feel somewhat implausible. Yet Antic Disposition missed a trick by cutting back Pistol’s story – the man is never mentioned after Bardolph’s death, and his story arc never completed. The tragedy of Pistol – the loss of the Boy, of his wife and his friends, as he is left shattered and disillusioned, would have carried a weighty punch for audiences, yet is never seen through. This reviewer was excited to see the bumbling, broom wielding Pistol, to become embittered and lonely, yet it never came to pass. Of course, within the metatheatrical context it would have been the First World War soldiers making these cuts – at which stage it perhaps makes more sense, but for Shakespeare purists and lovers of the Henriad, it felt like an opportunity wasted. The same also went for a much abbreviated version of Henry’s second speech at Harfleur, where in the original text he threatens to ‘[mow] like grass /Your fresh-fair virgins and your flowering infants.’ This would have certainly made for a more provocative and morally dubious character.

But these are problems that do not stop the play coming together as a conceptual whole. Antic Disposition are ready to embark on their cathedral tour with Henry V, and anyone fortunate enough to see the show will leave thinking not only of the former monarch, but also of the tragedies of the First World War. A harrowing yet powerful piece.

Henry V will be touring across the country until the 29th April. Photos from S. Rylander. More information can be found here.