Review of: Deathwatch - Print Room at the Coronet

The Print Room’s interpretation of Deathwatch, Jean Genet’s first play dealing with rising tensions in a prison cell, reworks the visual elements of the piece masterfully but seems to be battling somewhat with the ebb and flow of the script, translated by David Rudkin. Based upon his own prison experiences, Genet’s play seems to be an experiment in vaguely absurdist theatre techniques, but sadly tends toward a rather monotonous, circular path rather than any more meaningful exploration of stylized theatre.

That being said, Geraldine Alexander’s production does attempt to deal with the shortcomings of the play by stylizing the design to the extreme; the audience are confronted with a gorgeous, circus-like set design, with a stage strewn with dirt and straw and a large cage-like structure hulking in the haze, surrounded by red and gold lights. Lee Newby’s set/costume design and Dav 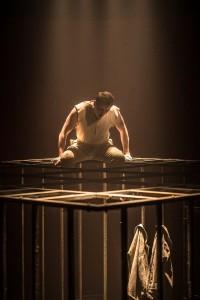 id Plater’s lighting are definitely the stand-out elements of the show – the lion cage alternatively functions as a prison cell and as a set of monkey-bars for the actors to clamber over, the huge, intensely visible bank of lights strung just above this structure only add to the performative nature of the piece.

Despite some admittedly laudable acting, the slightly clunky lines don’t really feel like they know what they’re aiming at. In the introduction to the script, Rudkin mentions that ‘the actors must aim for heavy gestures; or such as flash like the fastest lightning, too rapid to be taken in’, as well as stating quite clearly ‘No clever lighting’. If approached in this way – stripped back with all attention focused on the actors – the show might work better. While the visuals were absolutely gorgeous, it did feel somewhat like they had been produced at the will of the production team, not at the will of the play.

The acting was, considering the restraints of the script, superb, a particular standout was newcomer Joseph Quinn who embodied the alternatively rat-and-lizard-like Maurice with hair-raising intensity. There were some decidedly odd sections, where, for example, Maurice and Lefranc are discussing Green-Eyes while he sits a metre away from them, apparently not being able to hear anything, and moments where the clunkiness of the script showed; however all four of the actors dealt with this admirably. A scene where we glimpsed what the play could have been like, had it been approached a different way, was when Emma Naomi’s Watchman entered the cell – the script immediately felt much more natural and less forced, her character providing a welcome break from the slightly monotonous chatter beforehand.

This can all be summed up in one problem – the piece felt like it was compromising between what the stripped-down, absurdist version Genet wanted and a ‘spectacle’, which would have needed more naturalistic acting in order to make an emotional impression on the audience. However, this should definitely not all be pinned on the Print Room’s production, but rather on the original play itself; there is a reason it is not revived nearly so much as the infinitely more subtle and complex The Maids. I applaud the team’s courage for choosing this piece, and most individual elements were created wonderfully. However,  there was ultimately a noticeable disconnect between what was happening onstage and the eyes of the audience.

Deathwatch is playing at the Coronet Theatre until the 7th of May at 15.00 and 19.30. Tickets can be found here http://www.the-print-room.org/theatre/spring-2016-season/deathwatch/