Review of: Darknet at the Southwark Playhouse

Darknet is a big, ambitious play that you currently have the chance to see in an intimate space.

How many things are you currently logged into whilst you’re reading this? Facebook? Google? Perhaps Spotify or Netflix? We all know that these corporations track our names, activities and preferences, but what they do with all of that data is rarely the subject of that much scrutiny. Darknet, the brainchild of writer Rose Lewenstein and director Russell Bender, shines a spotlight on this world of hidden profiteering with a well executed, if traditional, story line of evil corporation versus moral hacker underclass. 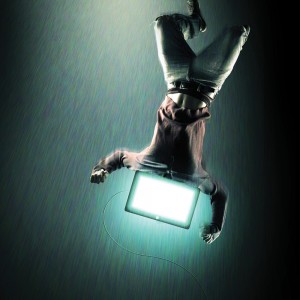 Darknet is on the surface a recognisable world; parents get upset with their non communicative children, people struggle with drug addictions, and 4chan (unfortunately) still exists. Yet gradually, Rose Lewenstein introduces the language of hard data into her characters’ interactions, and it emerges that the value of private information is the overlord of every day life. We follow a huge cast of characters through intercut scenes at a dizzying pace, all linked by data corporation Octopus who allows users to trade their personal information for cold hard cash (or rather, OctoPay Balance). The better your job, the healthier you eat, and the more you interact on social media, the higher your personal value is, and the more money you can earn.

Far from being motivational, this obsession over your score leads Stacey, a drug addicted mum, to choose not to seek help because admitting she has a problem would lower her value. People who opt out, like 16 year old Jamie, face a future of no mortgages, no higher education and no employment. Only a criminal cyber world of anonymous hackers can help people to play the system.

Designer Mila Sander’s set of empty frames stare back at us, occasionally flickering into life as computer screens, cupboards and even holes through which hands and arms inexplicably emerge. Complimented by Henry Garner’s slick use of on stage live video streamed through hand held devices, this is a minimalist yet flexible backdrop that allows for multiple scenes to be taking place across the stage at any one time. Barely-there scenery is shifted around by the cast themselves, which can have a rather hit and miss result in delineating spaces, that could do with a few more physical pointers to be more consistently successful.

The device of cutting between two simultaneous scenes on stage is an effective one; not only can it heighten tension or dramatic irony, it also subtly reminds us of our lack of attention span when it comes to the internet. We rarely focus solely on one article, picture or tab, and flicking backwards and forwards mimics the way we consume the internet itself, bringing the show’s theme into all aspects of the performance. However, it could be used more sparingly in this production to give more weight to the scenes that do complement one another in such a set up. At points, its use doesn’t serve to link two story lines together, and robs each scene of their own natural tension.

In a talented cast, Robin Berry and Rose Thomson are particularly notable for their seamless transition between multiple characters, each one clearly distinct and existing in their own world. Gyuri Sarossy as Octopus CEO Allen, also shines during his transformational speech where he remembers his first encounter with technology, describing it in a reverence usually reserved for the first time you have sex. The large cast is impeccably choreographed, moving the set around along with their entry and exits to scenes, and yet at times this becomes overly indulgent, for instance with long scenes involving empty frames and strict patterns of movement across the stage. At one point, hundreds of orange ping pong balls, which represent loading screens or the virtual world in this play, are dropped on stage. However, this leaves the cast trudging around causing cascades of little clicking noises whenever they walk or move the set around, which is really distracting.

Don’t be fooled that this play is a projection of the future; corporations are profiteering off our private data now, except we don’t see a cut of the profits. It would have been interesting to see more of this link to the present in the show, to create a counterbalance against the fairly black and white narrative of immoral corporate giant versus freedom fighting band of subversives. However, this is a big, ambitious play that you currently have the chance to see in an intimate space = watch it now before it upgrades, and don’t forget to tweet, like and share on your way out.