Review of: Closer by Circa

Produced by:
Circa and Underbelly Productions

Price:
From £16
Reviewed by: Olivia Coxhead

Circa's stripped back approach is a welcome change to the over-sequined spectacle of old circus, directing focus to the skills and effort of the cast, and proving that simplicity can still enchant.

Circus is often the celebration of the superhuman; unbelievable feats of strength, magical narratives, and flying against gravity. We go to watch people defy the limits of our human experience. Multi-award winning company Circa bring a fresher, more stripped back approach in their latest London tour Closer, with a monochromatic, gimmick free presentation of a more human-centric show. It’s a welcome change to the over-sequined spectacle of old, bringing focus to the skills and effort of the cast, and proving that simplicity can still enchant. 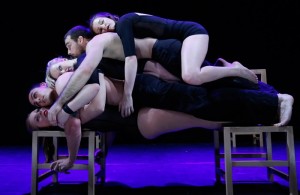 Made up of a pattern of solo acts and linking group pieces, there is no central narrative around which the show builds itself – this is truly a show that’s returning to the fundamentals of physical performance. With nothing but a soundtrack of golden oldie hits to set the tone for each new scene, the bodies of the cast members themselves become the set, props, and occasionally the very ground beneath their co-stars feet. They form a ladder to send a performer up to meet her trapeze, using the chance to display some world class basing and flying techniques, proving that Director Yaron Lifschitz makes the most of every single second and centimeter on the stage.

Yet, this is no love letter to the human body, you can see joints straining during lifts and sweat and concentration wash over each cast member in turn as they progress with the show. At several points, someone will jump full force and flat footed onto their co-stars stomach or limbs, making the whole audience groan. By celebrating any wobbles as proof of the effort and danger in these acts, the audience becomes more invested than ever; this is circus for the purist who doesn’t need something aesthetically air brushed, or for the effort to be hidden under stagecraft.

Not having any central story line is a bold decision that runs the risk of letting component parts not quite stand up for themselves, but the engagement between the cast, with comedy hugs, smiles and coorperation throughout, shines through as a more subtle way to bind the show together. Touching moments, like letting base performer Lisa Goldsworthy leave the ground for a few seconds (however unimpressive the move is in comparison with the calibre of her astonishing routine with Lauren Henley), become the humanising highlights that the show wraps around.

If there were anything to fault with the show, it would be the abrasive scene changes, that take their cue from a song change. The group scenes that link these together are masterclasses in resetting a stage whilst still keeping your audience on the edge of their seats, but the sudden changes in tempo and mood can be jarring. An inexplicable foray into audience karaoke also doesn’t seem to fit with the show, however admirably Daniel O’Brien leads the vocals. Aside from this scene, Closer is too soon over, and you will leave googling the nearest circus class you can take. The prowess displayed on stage may forever be out of our reach, but we will have the transformative memories of this show to console us.

Closer by Circa will be continuing its run at the Udderbelly Festival until 12 June 2016. You can buy tickets from their website