Review of: Blue On Blue

Produced by:
The Skullcap Collective

Blue on Blue is a darkly funny look at how men can struggle to express their emotions, and how disability is more than just what we can see.

There has been a lot written in the media recently about how mental health problems should receive the same level of support and funding as physical ones. In Blue On Blue, The Skullcap Collective explore how both can negatively impact someone’s life. 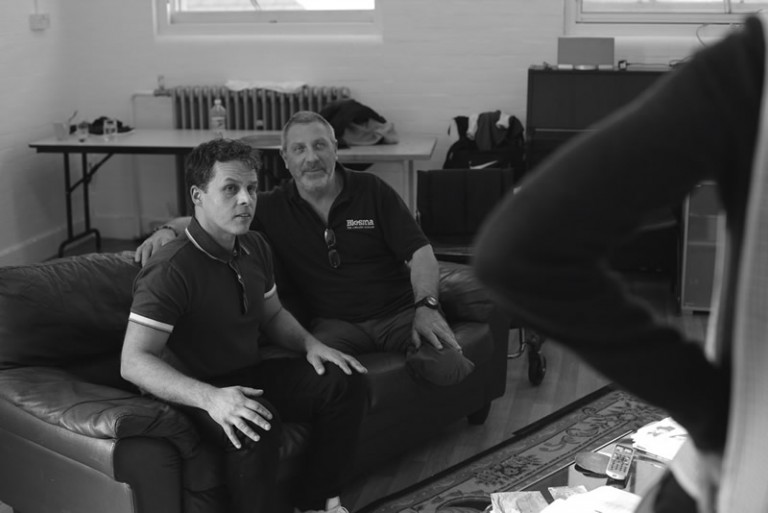 We open to the sound of increasingly panicked army radio communications, in the grubby flat ex-serviceman Moss shares with his mentally-ill nephew Carver. The yellow-stained walls and sagging couch suggest a lack of care for their environment, a resignation that this is the best they can hope for.

Moss and Carver initially seem like the classic odd couple: Moss smoking rolls-ups in a faded Motörhead t-shirt, Carver in a meticulous, obsessively ironed shirt. Their first conversation is punctuated with a comedic amount of swear words, hinting at the fraught relationship between the two men. Their lives seem simple and contained – banter, watch tv, few drinks down the pub. “Blue on blue” is the military term for what is more commonly known as “friendly fire” – being hurt by an ally. It’s a suitable metaphor: here the two men hurt each other as often as they support. Darren Swift, whose lost his legs serving in Northern Ireland, seems entirely comfortable on the stage, playing a man who knows the limits placed on his world.

Women are almost immediately dismissed as “all the same”. But it’s when Hungarian auxiliary nurse Marta enters their lives that things become more complicated. There are hints that she’s a former sex worker, and Moss sees no problem in using her as a nurse-with-benefits, casually exploiting her good nature, her desire to improve her situation and the need to keep her job. Carver is horrified by this, but his attraction to Marta makes the situation even more tense. Ida Bonnast’s role feels limited, however – she’s there for the men to respond to, to have feelings about, rather than as a fully developed character. Why she would be interested in a relationship with either of the men seems unclear.

What starts out as a humorous look at the lives of two incompatible men morphs into something much darker in the second act. Frustratingly Daniel Gentely, as Carver, overuses the stereotypical gesture of head-holding as a sign of mental illness. It feels trite to begin with, but it leads to a more complex exploration of how disability is more than just what we can see. He’s constantly on edge: fighting then resigned, coping then helpless. His illness as it worsens is distressing to watch, and his self-harming is revealed in graphic descriptions of stitches and tourniquets. At first his fastidiousness seemed quirky, manageable, but as his life becomes more complex, his coping mechanisms become more unreliable.

Despite some horribly lengthy scene changes, and a fair few slip ups on lines, this play manages to be both painfully funny and just plain painful. It ends hopefully, with Carver getting the help he desperately needs. But in ‘real life’ there are still too many people on waiting lists – waiting for help, waiting for change. Audience members might assume that having no legs would be the greater difficulty, but Blue On Blue challenges that idea.

Blue On Blue will be continuing its run at Tristan Bates Theatre until 14th May, at 19:30 Tuesday to Saturday and 15:00 on Sundays. You can book your tickets from 020 3841 6611 or www.tristanbatestheatre.co.uk