Review of: Best of BE Festival - Barbican Theatre

Produced by:
Grumelot, Squarehead Productions, TIDA and BE Festival

Inventive, bold and brilliant, Best of BE Festival at the Barbican Theatre is a showcase of truly ingenious European talent.

Before plunging into this review, first, a little background detail – the BE Festival (Birmingham European Festival) takes place annually in June at the Birmingham Repertory Theatre, and showcases the most daring and innovative collection of theatre, music, comedy, dance, circus and performing arts from across Europe. The Best of BE Festival at the Barbican Theatre is a compilation of the three most popular performances from last year’s festival, chosen by a judging panel: #sobrejulieta by Grumelot from Spain, The Whistle by Squarehead Productions from Ireland, and Quintetto by TIDA from Italy. Now that that is out of the way, it is a pleasure to declare that this display of European talent is not only the Best of BE Festival, but one of the best pieces of theatre in London. 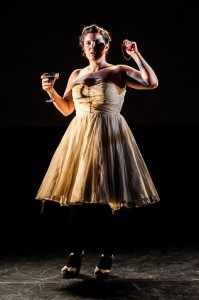 Starting with an adaptation of Shakespeare’s Romeo and Juliet, #sobrejulieta presented the version of Juliet that I had always longed for – passionate, bold, hilariously witty, and constantly unafraid to expose her emotions in any way that she deemed fit. Performer Carlota Gaviño as Juliet was mesmerising; for the first few minutes of the piece she didn’t even speak, instead slowly removing her shirt from over her head to the sound of You and Me by The Wannadies. There was so much emotional gravitas in this single action, however, that speaking was unnecessary, as her facial expressions epitomised every flicker of hope, love and excitement that accompanies the first flourishes of romance. When Gaviño did eventually speak, she used a combination of live speech and audio recording, English and Spanish, with smooth transitions and understandable motives. A bilingual Juliet (and Romeo, for she recited his lines in response to her own, changing character with a mere raise of her hand), in one instance helped to portray their confusion when confronted with such a dizzying romantic entanglement, as they were so overcome with emotion they were unaware of what language was going to come out of their mouths next. #sobrejulieta beautifully manipulated contrasting ideas – the biochemical formulas of love versus child-like romantic play; English and Spanish; live performance and pre-recorded pieces, and did so with effortless grace. 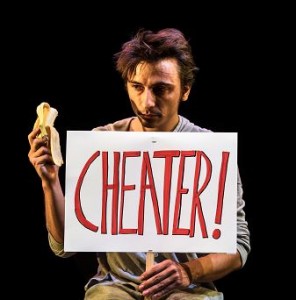 The second offering of the evening was The Whistle, a circus performance piece featuring Darragh McLoughlin. Using a number of white balls, he executed a series of expertly controlled manoeuvres and daring feats of physical skill, but with one small catch: every time his eponymous whistle blew, the audience had to close their eyes, and were only allowed to open them once the whistle was blown again. It was a simple enough concept, but was executed to comedic perfection. While the audience could not see, McLoughlin could move his various props wherever he wanted – a rubber ball that was almost in his reach one moment would, after a few sharps blows of the whistle, suddenly appear a few feet away from him; after lowering his microphone to a suitable height it would, to his annoyance and our surprise, seemingly raise itself awkwardly out of reach again. This technique was used to particularly hilarious effect when we could only hear McLoughlin slowly eat a banana, or when he asked us to close our eyes as he changed his costume on stage. The desire to take a peek at every point was palpable – our collective and desperate desire to be naughty and disobey the simplest of instructions gave the piece its crucial vitality. When he began his beautifully choreographed finale, however, the comedy faded away and was replaced with similarly astounding skills, exuding a mastery of his art that left his audience breathless. 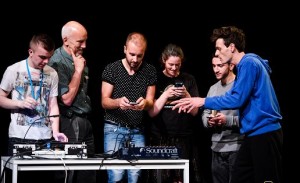 Some may argue that any production scheduled for the end of the evening can be a blessing and a curse; your performance will be fresh in your audience’s minds, but you also have the enormous task of maintaining their attention, which proves particularly difficult if the preceding shows are exceptional. I cannot think of anyone better suited to the task than Marco Chenevier, whose explosive energy throughout Quintetto was a sight to behold. Presented as TIDA’s company dance piece facing budget cuts, Chenevier enlisted several members of the audience to be his backing dancers, lighting and sound technicians, so that he could bring his tribute to Italy’s renowned Nobel Laureate Rita Levi-Montalcini to life. With his unreliable production team and fellow cast mates behind him, every ‘planned’ part of his piece began to collapse, and Chenevier demonstrated his razor-sharp wit with uproarious, improvised one-liners in response to every mistake. Though I had never seen or heard of Rita Levi-Montalcini before this evening, Chenevier’s representation of her was wondrous; donning a green blazer, brown stockings and a hair full of baby powder, his hunched body and pursed lip certainly seemed to embody at least a fully-formed, hyper-realised version of the beloved scientist. But, like McLoughlin, when the comedic side of his performance subsided, we were at last able to see a gorgeous display of dance, performed with majesty and purpose. Chenevier’s talent for comedy and choreography were undeniable, and was a glorious end to an evening full of exceptional artistry.

All three productions were utterly astounding pieces of theatrical ingenuity and creative flair, demonstrating that our continent is bursting with passion and revolutionary performance art. My recommendation? Don’t just go to the Best of BE Festival at the Barbican Theatre this week – go to the Be Festival this June at the Birmingham Repertory Theatre as well. If this condensed snippet is an indicator of the talent that this festival possesses, then trust me, you will not want to miss either of them.

Best of BE Festival at the Barbican Theatre will be continuing its run until April 16th, with evening performances every night at 7.45pm. You can book your tickets from 020 7638 8891 or https://www.barbican.org.uk/eticketing/performancelist.asp?shoid=39627.