Review of: Woof at the Soho Theatre

Irreverent without being cruel, Woof is a cleverly hilarious sketch collection that subverted audience expectations at every turn.

Kitten Killers are a lot less violent than their name suggest. This comedy performance group – which formed in the performance space at the Soho Theatre – could not have exuded more unbridled energy and joy, with a healthy dose of irreverence heaped on top. The three members (Fran, Kat, and Perdita) ­greeted the audience personally upon their arrival, handing out glow stick bracelets and enthusiastically encouraging participation in questions shouted out over a loudspeaker (‘Say Woof if you’re on a date!’ and so forth). They may be ‘abusers of all things cute and fluffy’ (according to their website http://www.kittenkillerscomedy.com), but by the time the sketch collection started there were already laughs aplenty, and it only got better.

As to be expected from a three-woman cabaret, there is a healthy dose of social commentary and innuendo involved in the sketches. These, however, are always lighthearted rather than bitter. Highlights include Kat singing a Guys and Dolls parody around George Osborne rolling in cash from the tampon tax and a waltzing ditty about vulgar photos sent to women – quite a bizarre mashup of eras! While the lack of an overt attack or any anger aside from the comic may be a drawback for someone looking for fiercer feminist critique, most of the topics raised throughout the show are still (sadly?) taboo, despite their everyday reality to most women. 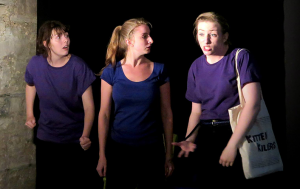 However, the sketches aren’t limited to the thought-provoking or relevant. Many are straight-up comedy relying on nothing more than subversions of expectations. These sketches are usually shorter – around five minutes maximum – and self contained. Between a violent unicorn smashing a princess’s dream, to the shocking end of two bigoted flower pot men, to the accidental robbing of the wrong bank do nothing more than shock, gross out, and delight. That outward simplicity, however, is enough to make the entire show hilarious. One gag with Fran’s book of secrets (read: smutty fan fiction) is the only constant thread throughout the show and provided the outrageously funny audience-inclusive conclusion.

Woof is only an hour long, but with its balance of screwball humour and lighthearted social commentary it is one of the few comedy sketch collections that I would not have minded being longer. Kitten Killers have created an incredibly delightful evening of cabaret sketches – a thoroughly joyous theatrical event with more than enough bite to rise above the trivial cute and fluffy.

Tickets can be purchased from http://sohotheatre.com/whats-on/kitten-killers-woof/. Tickets are £10, and the show plays on 15th and 16th March at 8.45pm at the Soho Theatre Upstairs.