Here’s one to keep on the radar: fresh from a highly-acclaimed run at Edinburgh Fringe 2015, Whiskey Tango Foxtrot is back with gusto, following an amazing four nominations in the Broadway World Awards.

Based on Rebecca Crookshank’s time in the Royal Air Force serving Queen and country, Whiskey Tango Foxtrot charts her journey from basic training to the Falkland Islands. The show aims to highlight the challenges women face in being defined by their gender and celebrates the wonderful women who forged a path for others. Crookshank’s anecdotes about her time in the Air Force mix the serious and the comic to great effect interspersed with her own video footage to really emphasise the reality at the heart of her story. All the more appropriate in the week of International Women’s Day. You can see accounts of Crookshank’s experiences in her video account here. 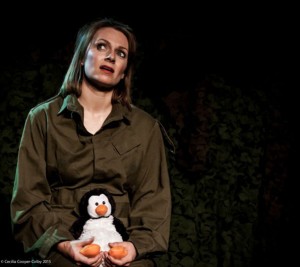 Crookshank grew up in rural Devon, the daughter of a midwife and a Royal Marine. Raised by agiver of life and a trained killer, embracing creativity was on nobody’s radar. When she left the RAF she knew it was time to pursue her dream. She says:

‘Exploring our identity is a life-long challenge. Reinventing yourself and finding a voice in such a disciplined environment as the military is unique – it has inspired me to create some art which I think makes for an interesting story.’

Whiskey Tango Foxtrot is headed for the Rose and Crown Theatre from the 14th – 18th March. It well then appear at the Tristan Bates theatre next month. More information available here.