Review of: What I Learned from Johnny Bevan

What I Learned from Johnny Bevan, performance poet Luke Wright’s first theatre show, offers a bitter eulogy to lost adolescence, abandoned dreams and youthful idealism. Performing as both Nick, the narrator, and Johnny Bevan, his best mate and hero, and a host of supporting personalities, Wright channels his characters with precision and ease, meaning his back and forth exchanges with himself are never rendered as awkward or ridiculous. 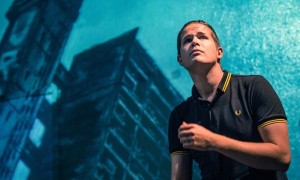 Nick is the relatable one – kind of annoying, middle class, dissatisfied with laddy chats about football and cars. He gets to university and finds Johnny, the kind of friend he’s always wanted. Johnny knows about literature, politics, music and girls and, whilst his working class background, his skinny jeans and his knee high DMs are far away from what Nick thought he was looking for, he falls in with Johnny easily, finding in him a kind of spirit guide.

Its in conjuring this deepening friendship that Wright is at his most affective. We’re sold on the love between the pair, the kind of youthful obsession we’ve all had, or wanted to have. Johnny and Nick share their hopes for the country and their dreams for themselves. It’s a charming, real relationship and Nick seems better for having met Johnny.

The emotional crux of What I Learned though is found in the shift from the sunshine haze of youth, to the grey apathy of middle age. Friendship and idealism is tempered by the world, with both men broken in their own way and their relationship long since over. Elation at the rise of New Labour gives way variously, to anger, disappointment, boredom, bitterness and apathy. Johnny, working class, abandons Labour as it abandons him and drifts from squat to squat, flirting with the same dangerous politics that previously he protested.

Nick, shielded by his middle class upbringing, becomes every stereotype of the lazily apathetic lapsed-lefty, trading writing about issues for writing copy, drip-fed by marketing professionals. Incidentally, its only here that Wright’s impersonations seem cruel – Tilly and Milly, the posh, silly PR people are easy figures of fun in an otherwise politically astute piece.

Politically, What I Learned from Johnny Bevan probes some interesting territory, although, with its focus on the human relationship at the heart of the story, doesn’t always go as deep as it might. Johnny’s flirtation with UKIP links to liberal anxieties around the left wing argument for Brexit, and represents the concern that traditional Labour voters might migrate towards Farage. Similarly, in the context of the protracted battle for the party’s soul, his concern that Labour no longer represents the working class may be valid, when we consider the struggles Corbyn has had to impose his old-school socialism on the party. His popularity among young lefties would have fired up Johnny and Nick during their university days, just as they followed Blair. But now, with all their disillusionment, it seems that the torch has been passed. The show ends on an optimistic note, and perhaps Nick might represent the kind of voter Corbyn’s project needs to enlist and re-electrify. But it’s the image of an extinguished youthful optimism that haunts the piece, speaking to our own worry that we too might sell out or give up.

What I Learned from Johnny Bevan continues at Soho Theatre until 12th March.

Written and Performed by Luke Wright