A visually gorgeous production of Shakespeare's beloved comedy, TWELFTH NIGHT, BY SCENA MUNDI at The French Protestant Church is a fun way to kick-start your celebrations for the Bard's 400th anniversary.

As we swiftly approach the 400th anniversary of William Shakespeare’s death, theatre companies across the capital are producing varied interpretations of the Bard’s collective works. Soon London stages will be swarmed with Hamlets, Shylocks and Beatrices aplenty, and iambic pentameter will feel like a familiar friend. Scena Mundi offers their contribution to the festivities with Twelfth Night, and although some of its objectives are slightly underdeveloped, the production is a joyous depiction of Shakespeare’s popular comedy. 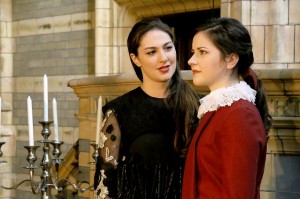 When the lights dimmed in Soho Square’s French Protestant Church, Feste the Fool, played by Edward Fisher, emerged from the darkness, striding down the aisle with thoughtful poise. As he approached the stage and picked up a lute, it would have been easy to assume that Scena Mundi was starting the play with a rousing courtly cinque pas, perhaps. So it came as somewhat of a surprise when the lights began to flicker in various fluorescent colours, and a low bass beat echoed through the pews. One by one, Feste shepherded the other characters down the aisle in a vogue-inspired array of stylised movements that presented a general depiction of their personalities and motivations at the beginning of the play.

Director Cecilia Dorland states that she crafted such an entrance in order to create ‘a fashionable and sophisticated world, mid-way between Elizabethan pageant and haute-couture catwalk’, and for a narrative that concerns itself with the nature of appearance, and more importantly, the extent to which we can trust the judgements we make from physical appearance, the connection is justified. However, this opening scene is so visually surprising, that it becomes disappointing when this motif seems to be ignored for the rest of the production. The plot, of course, still focuses upon the theme of visual uncertainty, and Georgia Green’s costume design reinforces the differentiation between how we perceive physical appearance and inherent behaviour (Countess Olivia is a particularly excellent example of this – Green dresses actress Emma Hall in an elegant black gown, with regal black and gold laced sleeves, yet Olivia’s treatment of potential suitors is far from exquisite). But it would have been wonderful to see a different depiction of the Elizabethan catwalk later on in the production, and perhaps see Dorland explore how each character’s physical demeanour may or may not have developed due to narrative events. Therefore, the absence of any return to Dorland’s catwalk revelries ultimately (and unfortunately) made the opening seem rather superfluous.

In terms of acting talent, the cast certainly knows how to perform Shakespeare; they carried the Bard’s verse and prose with seasoned flair, and their delivery of punchlines generally garnered laughter from the audience. A special mention in this regard must be given to Jack Christie, whose exuberant performance as Sir Tom was a pleasure to witness. Bawdy and roguish, Christie brightened every scene with infectious energy, and his sonorous voice resonated with every exclamation of debauched carousing (a particularly useful skill, when lines can so easily be swallowed by the vacuous space in such a large venue).

The most thought-provoking performance, however, came from Martin Prest, whose Malvolio created contention with the traditional understanding of the character. Though I am not particularly knowledgeable of Twelfth Night, I have come to a general understanding that Malvolio is, at the very least, a somewhat odious and ridiculed figure; Dorland herself argues that, for her interpretation, ‘[w]e have decided to laugh at him, not to cry with him’. And yet, Prest’s interpretation of the character forced us to do otherwise. When Malvolio is imprisoned on grounds of madness, and Feste visits him in order to play another merry trick upon him, Prest was the embodiment of utter misery. His whole body shook in paroxysm of woe, and he cried out so pitifully to be saved, the effect was chilling. This was not a man to be mocked, as Dorland suggests, but a man who, as Olivia argues, “hath been most notoriously abused”. The performance in this moment alone was stunning, and Prest should be praised for creating such contention in the depiction of Malvolio, a character that many consider simply a scheming Puritan who deserves his miserable end.

Twelfth Night, by Scena Mundi is a production full of vibrant visuals and excellent performances, but seems to unfortunately lose focus with some important motifs. Dorland certainly had a clear vision for her interpretation, and the aspects of pageantry and personality that she invoked were engaging, but these ideas were not fully realised throughout the performance. However, what she has created is a highly entertaining production, and would be a great way to start celebrating the genius of William Shakespeare.

Twelfth Night, by Scena Mundi will be continuing its run at The French Protestant Church, Soho Square until April 9th, with 7.30pm performances Tuesday-Saturday, and 2.30pm performances every Saturday. You can book your tickets from 0333 666 3366 or https://www.ticketsource.co.uk/scenamunditwelfthnight.