Review of: The Happiness at the North Wall

This North Wall physical theatre exploration of what it means to be 'happy' ultimately fails to convince.

Watching various physical theatre-trained actors roll around in shredded newspaper for an hour is usually something that would entrance me to the core. Sadly, however, Karla Shacklock Company’s The Happiness didn’t impress – the main problem being that the show was based a ladder of clichés stemming from a rather uncertain base assumption that consistently undermined the entire piece. 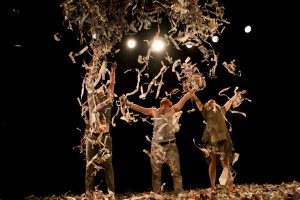 This base assumption, introduced to us at the very start, consisted of claiming that ‘happiness’ is something definable and if you just follow a basic set of rules and follow some odd ‘happiness path’ you’ll reach it in the end. What the show didn’t seem to realise, however, is that the obvious absurdity of this claim meant that any contrary conclusion reached at the play’s end was completely undermined by how easy it was to contradict this beginning assumption of ‘happiness’ in the first place. It genuinely felt like we were confronted with a set of ‘rules’ of how to be happy, then only to be told to throw the ‘rulebook’ out and find happiness in the smaller things in life, leaving the theatre wondering why it had taken this company 90 minutes to tell us what any child would have been able to communicate in minutes – that happiness is subjective.

Not only was the premise of the show rather shaky, but the way the three actors attempted to go about this show-and-tell approach was worrying to say the least. This consisted of setting up a situation in which someone could be seen as being ‘happy’ before revealing that, actually, surprise, they weren’t. Part of this listing of fake ‘happinesses’ included a 4 minute section of a female character telling the audience with gusto how happy she was to be pregnant and going into ‘labour’ before revealing with tears streaming down her face that she’s not actually pregnant and is instead worried she’ll never be able to have children. This simple tragedy, which could have been so beautiful, came off as one in a whole long list of examples exploited and tossed to the side in an attempt to define what ‘happiness’ means and is; a case to be pointed at with a knowing look to the audience, saying ‘see, everyone who seems to be happy might not be’. End of section; point made, unhappy non-pregnant woman continues being unhappy, her usefulness is now over and we shan’t be seeing her again.

However, what is perhaps the main tragedy of the piece was that the three actors and one musician presented onstage were actually very good. The physical theatre sections were beautiful in their movement, the music was absolutely glorious (the set made of mounds of torn-newspaper, again, a fantastic idea). A stand-out moment arose towards the end, where each actor, standing still amongst the piles of newspaper, very quietly and simply started describing what made them personally ‘happy’. This included things like ‘poached eggs’, ‘seeing my brother with his kids’ and ‘seeing my brother as well, actually’.

Attempting to produce ‘happiness’ onstage was always a venture doomed to failure, especially when produced in the performative, self-help kind of way Karla Shacklock Company chose to do. However, I really hope the next show that these performers embark upon will give them a chance to show their true talents, which were infinitely superior to the material and structure of this particular piece.

The Happiness will be touring Salisbury Playhouse on the 19th of March and Newcastle on the 15th and 16th of April. Tickets and info can be found here – http://www.karlashacklock.com/