Something exciting is kicking off this saturday across the country, and no matter where you are you can get involved!

STIs are normally the preserve of teens and tweens, but a bold new artistic movement from Split Britches aims to highlight the importance of such diseases in an ageing population. Having challenged convention at every stage of their careers, Split Britches are now set to disrupt the way we think about getting old, as they present a series of workshops and performances across the country from 11 March – 16 April, and prepare to launch a Public Service Announcement via YouTube on sexually transmitted diseases within the ageing population. 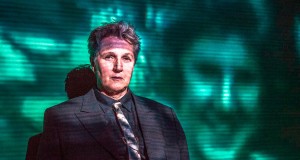 Led by Peggy Shaw and Lois Weaver, New York-based duo Split Britches has transformed the queer art scene over the last thirty years with satirical gender-bending performances. Beginning with a performance in Lancaster of Lois Weaver’s What Tammy Needs To Know About
Getting Old And Having Sex, which asks the difficult questions about sex in midlife and beyond, and followed by a headline appearance in The Diva-Liz-Cious Cabaret as part of Southbank Centre’s WOW Festival, the season will conclude with three performances of Peggy Shaw’s RUFF, presented by the Barbican at the Silk Street Theatre.

RUFF ruminates on life for Shaw before and after the stroke she had in 2011, delivering a freewheeling monologue with deadpan humour and arresting honesty. There are dark spots and blanks in Shaw’s memory now, yet she reflects on what is lost and equally celebrates the space left behind for new insight.

The performances follow a Split Britches residency at the Silk Street Theatre, where they will invite elders and experts from around the world including Tasmania, Alaska and Poland as they begin research and development on their forthcoming show Unexploded Ordnances, which will investigate the risks of unexplored creative potential. The company will also launch a dedicated YouTube channel aimed at elders seeking alternative perspectives on ageing, which will host Public Service Announcements like none you’ve ever seen before…

For more information about Split Britches, go to their website at www.split-britches.com, follow them on @split_britches. Tickets for RUFF can be bought at www.barbican.org.uk.