Review of: The Secret Life of Sugar Water at the National Theatre

The Secret Life of Sugar Water is a show that must be experienced; even with the side dose of physical exhaustion.

At the Edinburgh Festival Fringe last year, The Secret Life of Sugar Water caused something of a stir amongst audiences – lauded as a deeply emotional experience that stood head and shoulders above so many other performances, both at and outside the Traverse Theatre. Some fellow thespians, exhausted, would return to our flat near Haymarket Station after performances, as if having endured something physically depleting. Finally being able to see the show at its current run at the Temporary Theatre, latched rather unconventionally to the side of National on the Southbank, I can finally see why.

Jack Thorne’s script sees Phil and Alice, a married couple, come to terms with life before, during, and after an ante-partum hemorrhage. The narrative flies wildly and unpredictably between the past and present, the creation of a relationship and the death of a prospective child. It is a human story, imbued with a subtly crafted, masterful linguistic skill. Thorne has the capacity to weave humanity with lyricism, forging a sense of naturalism and empathy even with a structure that is prone to spasmodic temporal shifts. Words like ‘it’ ‘now’ ‘is’ or ‘was’ all of a sudden command an overwhelming amount of emotion and power – all commandeered with aplomb by the fantastic partnership of Arthur Hughes and Genevieve Barr. 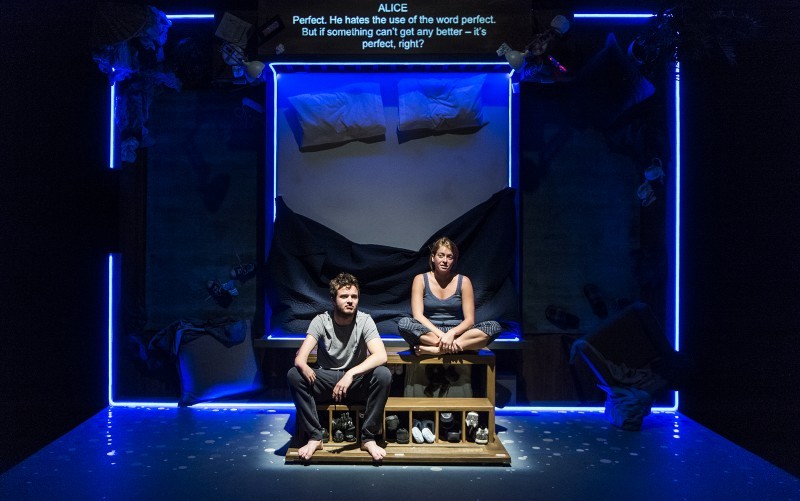 The traumatic experience of miscarriage and its effect on relationships has been a topic explored in a number of shows recently – Duncan MacMillan’s Lungs for instance being a comparative piece. Indeed, there is a tragedy of unfulfilled life – hope turned to despair. The death of a foetus can be used as a symbol of a dying relationship (as done in Lungs), the shared experience of two individuals being violently and unexpectedly rent apart. Where Lungs commits to this briskly and frankly however, The Secret Life of Sugar Water transcends these singular symbolic interpretations. This performance is physical, cerebral, almost intrinsically layered with flesh. A baby is a sexual entity, and as such it is in a sexual capacity that it is perceived. A fantastic duality exists in this respect – Thorne has Barr recreate the birthing scene of the dead foetus whilst Hughes, lying next to her, recreates a sexual experience – birth and ejaculation occurring simultaneously. The parallels are ambiguous – are both the birth and the climax meant to represent the removal of a dead weight? A moving forward for the couple? Or is it that the pair now exist in entirely different spheres?

This is a human play – an acknowledgement of a set of circumstances faced by thousands on a yearly basis.  As the final lights fade, there is the echo of children’s laughter – foreshadowing for the future as the two resolve to go on? Or the ghosts of those never born? It is impossible to know, as Thorne expects. This is a brilliant show with an innovative, lucrative set design from Lily Arnold and, though, marred perhaps by some intensely vigorous lighting changes that seemed slightly unnecessary, The Secret Life of Sugar Water is a show that must be experienced; even with the side dose of physical exhaustion.