A humorous and poignant look at our self-destructive patterns

The large programmes give to each audience member at the door only lists the show’s cast and crew on the outside. Inside is a list of acts included under the hashtag #quietviolence; this list comprises thirty-eight acts such as ‘He always breaks the hug first’, ‘Drinking because it’s easier’, ‘VODKA STRAIGHT’, and so forth – both interpersonal and self-directed. Of course Sophie Rose does not touch on each and every one of the listed instances of cruelty, only a few choice ones. Her piece, while narratively driven, takes time to explore the pain underlying the choices she and her friends make in order to feel ‘normal’. 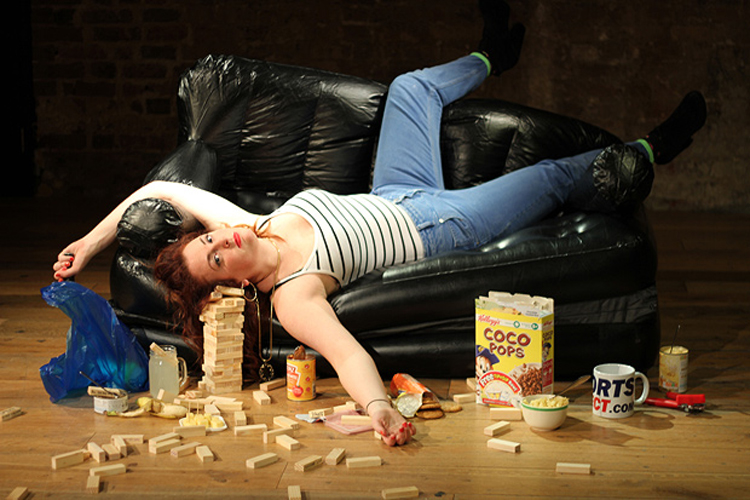 Originally from Hertfordshire and now based in London, the writer and performer portrays the struggles of any young adult making their way in the city – among friends and strangers – in a humorous, understated, and very relatable fashion. From the rent prices to the club scene to the challenges of a ‘Jenga’ block of flats, Rose charts her life from misspent nights to dodged interaction. She uses the everyday cruelty that is both self-inflicted and allowed by others to explore her relationships and herself. While many episodes are unconnected, the narrative present chronicles her friendship with her neighbour two floors down, a man who is decades older than she and as fond of cheese and telly (two things which he’s been told will kill him) as she is of skinny jeans and party nights. Well, things she claims to be fond of because they are currently in fashion.

Aside from the fact that the plot (and thus the focus) wandered a bit about two-thirds of the way through the piece, there is nothing left wanting in this exploration of the young Londoner’s condition. While only an hour long, it is well paced and has enough time to grow into a coherent narrative among the vignettes and tangential memories. There is a longing for authenticity and kindness here, and the poignant conveyance of this feeling is perhaps the most powerful and affecting memory of the performance.

By the end of the night, Rose has interrogated the common pains we put up with and wonders whether painful bra straps and couscous are worth it. She does so in such a truthful and joyful way, even though the subjects she deals with range from the trivial – clip-on earrings – to the slightly soul-crushing – relationships based on convenience. Quiet Violence is ultimately a celebration of life and biscuits, although it never lets our behaviours go uninterrogated. This piece, and any future work by Sophie Rose, is definitely worth keeping an eye on.